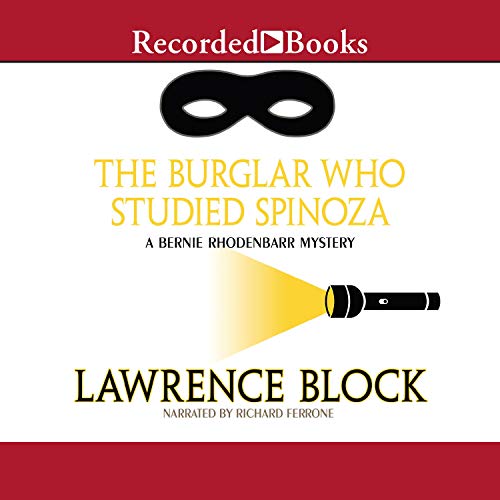 The Burglar Who Studied Spinoza

By: Lawrence Block
Narrated by: Richard Ferrone
Try for £0.00

Best-selling author Lawrence Block exposes the wickedly exciting double life of Bernie Rhodenbarr - respectable bookseller by day and notorious burglar by night. In The Burglar Who Studied Spinoza, Bernie applies philosophy to match wits with a wily murderer and a few too many burglars. Bernie and his dog-grooming partner in crime, Carolyn, are planning the perfect crime. Tonight, they will rob a brownstone while the well-heeled owners are out of town with their vicious watch dog. But when Bernie painstakingly picks the lock, they discover somebody has already emptied the house - except for a valuable coin almost too hot to handle. Lawrence Block's finely-crafted plots and well-drawn characters have earned him three Edgar Awards and the title of Grand Master. With his deep, gravelly-toned narration, Richard Ferrone provides the perfect voice for the book-loving thief and his sophisticated friends as they land in one hilarious scrape after another.
©1980 Lawrence Block (P)1999 Recorded Books, LLC
Mystery Suspense
Show More Show Less

What listeners say about The Burglar Who Studied Spinoza

Leaves you rooting for the burglar !

This is one of the books in the "Burglar Who..." series, by Lawrence Block. The adventures of Bernie Rhodenbarr, a burglar who prays to St. Dismas (the saint of thieves) and seems so likeable that it's hard not to hope he will succeed. He has the front of being a used bookstore owner, and in some ways Block lets the reader think that he would like to go straight for good, but his addiction to robbing people is so powerful, he seems always to get tantalized into burgling yet another place. Good thing there is no 12 step group for burglars, or we would be deprived of these delightful books. Actually, these books are so cleverly written, that he does wind up being the "good guy" most of the time, because even as he is busy burgling and quickly being suspected by the police--even spending time in jail occasionally-- he is also working quietly to solve the crimes that other people are committing as well (usually murders).

In this book, he & his friend Carolyn have gone to a house with intent to burgle, only to discover that someone was there before them. They find several things to take with them, but leave, believing they missed out on an opportunity--not knowing that a murder occurs there. They visit a kind old man, who seems to be a "gentleman fence," a man whom Bernie seems to genuinely like and so makes a gift of an old book of writings by Spinoza before getting down to the transaction of selling his loot. All that happens after this is typical Bernie, with the on-going cast of characters who people the stories, including the semi-crooked cop, Ray (who both wants to arrest Bernie, but tends to help him as well).

This is a good story, a good listen. My only small criticism (and it is small) is that the narrator does not do a good job of women' voices. He tends to lower his voice tone (rather than raise it) for Bernie's friend Carolyn, which can leave the listener confused. This entire series is really a fun listen. For some reason I have been listening to them out of order, and it doesn't seem to hurt anything (there is rarely mention of what took place in earlier books). Recommend!

Bernie always gets the blame!

Bernie Rhodenbarr does it again. He and Carolyn become the second thief and he gets blamed for the burglary as well as a murder. They take the loot to a fence he knows well,and then that man gets murdered. While Bernie works to find out who did the murders, we get a nice lesson in numismatics. The solution is presented with a flourish, as usual.
Richard Ferrone is the narrator and is fantastic.

It was well read but I've gotten spoiled with books that have multiple readers. I got a little confused, just momentarily, at the end of the book.

love the narrator and these stories

Bernie does it again. He burgles, he is arrested, and he solves another mystery to save himself. Lawrence Block does it again! Another wonderful story.

I always laugh at Bernie's adventurws.