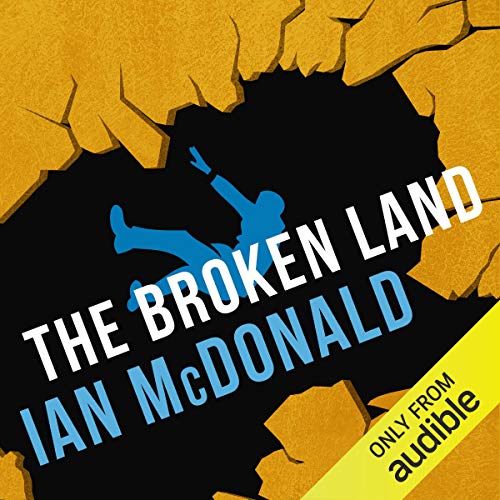 In an instant, Mathembe Fileli’s life was burned away... Now, in search of answers, she must traverse a divided nation.

Life in the village of Chepsenyt is idyllic. Despite the empire’s growing religious tensions, the people of Chepsenyt live together peacefully and ply their trades, growing useful objects through the manipulation of DNA. It was here that Mathembe Fileli grew up, with her father creating tools used in construction and her mother spinning clothes and food. That all changed in an instant.

The Broken Land mirrors Belfast resident Ian McDonald’s upbringing in Northern Ireland by depicting a nation cut in two by a violent religious divide. On one side are the Proclaimers, the ruling group that doesn’t believe in life after death, and on the other side are the Confessors, the opposing group whose thoughts are uploaded in the afterlife.

When two Confessors take shelter in Chepsenyt, the Emperor’s soldiers burn the village to the ground, throwing the whole country into civil war. In this newly perilous world, Mathembe must draw on her resourcefulness and inner strength to find her family and bridge the nation’s gaping rift.

"Inventive and often effective drama, but dense and oppressive, with the dark and anguished backdrop looming above the characters; and the ending bleakly acknowledges that, in terms of today's troubles, nothing much can be done." (Kirkus)
"The world is a captivating one with its rampant biotechnology and passionate characters. But McDonald..., a lifelong resident of Belfast, also succeeds in presenting the religious and national conflict of an Ireland that still knows no respite from bloodshed." (Publishers Weekly)

Surreal visions of the horrors of war

Ian McDonald’s The Broken Land (Hearts, Hands and Voices in the UK) is a book I admired more than I loved. It’s an allegorical look at the horrors of civil war caused by religious zeal and division. The story is set in a fictional country that feels like it could be in a future Africa where biotechnology has led to the development of mechanical infrastructure that is part organic and part artificial intelligence. The citizens are divided by their religious affiliation — some are Proclaimers and some are Confessors. All are subject to the Emperor who lives across the river.

Our protagonist is a young woman named Mathembe who, because of her particular convictions, decides not to speak. Mathembe is a confessor, so she is skilled in the manipulation of genetic material to create new life. When members of her family die, their heads are attached to a huge tree where they are eventually absorbed into “the dreaming.” As the story starts, Mathembe’s grandfather has recently died and is in the process of being absorbed into the tree with the other ancestors. But when their village is attacked, Mathembe grabs her grandfather’s head and runs. All of her family members eventually get separated and her brother joins the rebel fighters. The rest of the story follows Mathembe as she tries to find and reunite with her family. She experiences many of the struggles that civilians encounter in war-torn lands — homelessness, hunger, refugee camps, disenfranchisement, and most of all, loneliness.

Ian McDonald uses the plot to thoughtfully explore many issues associated with war, prejudice and oppression, to show us how our differences divide us and cause much human suffering, and to suggest that there is much more that unites us than divides us. His tone is often cynical, but he lightens the mood with quite a bit of humor (much of it centered on the grandfather’s decapitated head) and he succeeds in sending an important message without sounding preachy.

McDonald’s world, with its mix of the familiar and the unknown, is fascinating and intriguing. It reminds me of some of William Gibson’s work (there’s even a woman with razor blade fingernails). But often it’s frustratingly sketchy and surreal (e.g., what, exactly, is a “trux?”) and more than once I felt like I was on an acid trip during a police raid. Though I admired McDonald’s world, I never felt like I fully settled into it; it was always uncomfortably alien. I’d love to spend more time exploring it — I just wish I had been able to in this book. Something else that’s slightly uncomfortable is Mathembe herself. She never talks. It’s easy to feel for her, but it’s hard to get to know her. The heroine’s silence is such an interesting device, but it adds to the distance between story and reader.

“You are asleep in your bed. No, you think you are asleep in your bed. You are in that half awake, half aware state when even the familiarities of your own room are strange and unfamiliar. Awake or dreaming? You cannot be certain. You had dreamed of a great thrashing blade moving in space, carving slices off the edge of the world as it moves along its orbit; the sound of its thrashing fills the universe, the thrash of destruction, and you rush to the window to look out and see the street full of people running as the great blade comes down out of the sky. All around you is a great beating noise, and you do not know whether it has come from the dream inside your head into the outside or from the outside into your head. The thrashing sound fills your room, fills the air, fills up the spaces in your lungs and between the joints of your bones with its beating beating beating.”

As you can see, the imagery is startling and the prose is delightful, but after several hours of it, it starts to become tiresome and repetitive and eventually starts to feel like a quirk.

This is a good time to mention the audio production that I listened to (Audible Studios). It’s just over 14 hours long and is narrated by Adjoa Andoh, a British actress of Ghanaian descent. She is absolutely brilliant and her voices really add to the African feel of the story. The Broken Land is worth listening to just because she performs it. If you’re going to read The Broken Land, you absolutely want to read this version.

If you’re looking for something totally accessible and light, this isn’t it. But if you’d like to be challenged by Ian McDonald’s surreal visions of the horrors of civil war (something that, as a native of Belfast, he knows something about), try The Broken Land.

2 of 7 people found this review helpful