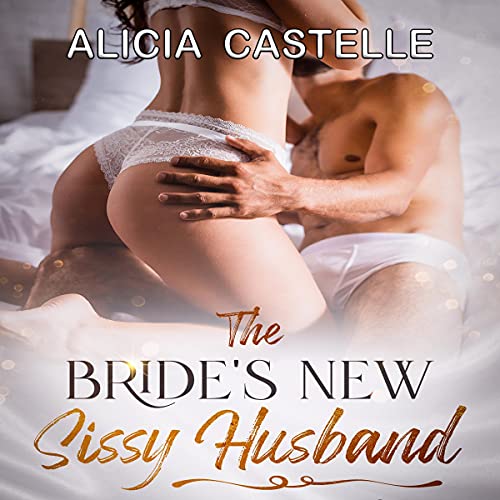 By: Alicia Castelle
Narrated by: Jackie Marie
Try for £0.00

This book is the latest installment of exciting, sissy domination erotica, and you don’t want to miss it! Keep reading to find out what you can expect from this book.

This short erotica story follows Fred and Georgia, a couple who are very much in love and who we meet on their wedding day. After their beautiful wedding reception, Georgia and Fred go back to their magnificent hotel room, and Fred can’t wait to have his first night alone with his new wife. Georgia, however, has other plans.

When they get to their hotel room, Georgia informs Fred that he must put on her wedding dress and a face full of makeup and answer to all of her demands. She blackmails him into saying yes, and he knows that he has no choice in the matter. He is afraid of what she can do if he says no, so he complies with her orders.

What follows is a wild and reluctant sissy domination story about a husband who must follow all of his wife’s sexual demands, including dressing up as the bride and being her sissy bride slave. Not only that, but his wife decides that he must engage in sexual acts with her friends while she looks on.

By listening to this book, you will discover a new sexual being within yourself that you never knew was there!

What listeners say about The Bride's New Sissy Husband

An audiobook full of ideas to improve your imagination between the sheets. It will delight you with well-written stories and masterfully narrated by a sensual and engaging voice.

I have listened to many audiobooks of this type, but this one beats them all. Engaging and well written stories, interesting characters and sensual voice. Nothing is missing. I thank the author for publishing it.

Very much enjoyed this sexy and sweet stories. If you enjoy listening about instant off the charts attraction and some hot dirty sex. Then this is definitely the audio book for you.

The stories were all good

This audiobook contains romantic and sexy stories that could excite I really love it. I listen through this audiobook and then used the techniques to spice up my bedroom life.

This book has romantic sex stories

This audiobook has sexy stories with satisfying endings. If you love a good romance audiobook this one has an amazing set of characters with a great hot stores.

Satisfied with this book

When you are thinking about dirty talk, you may be a little nervous to try it out but this audiobook will help you ease into the art of sexual conversation, and will give you tips on what to say, and what to avoid.

Nice super sex stories to give sweet dreams. It was nicely done not to over the top. Quick fun hot stories before bed. Really helped set the mood. These stories are full of real life fantasy that you could lose your self in and actually want to take part in.

This is a large collection of steamy stories featuring step relationships. You will need both as they heat you up. This a highly recommended.

If you like lots of sex, are ok with some tough subjects then you’re in for a nice little surprise with these 5 full length stories. Superb Sexy Stories great fun and great imagination really enjoyable and gets you in the right mood for some sexy fun and games.