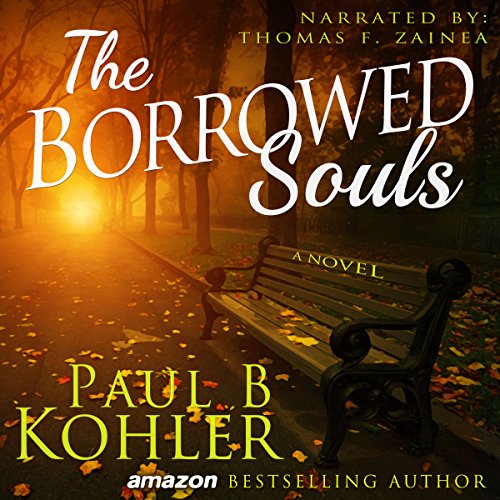 The Borrowed Souls, A Novel

The afterlife is not at all what Jack Duffy had expected. A failed suicide attempt launches him into a world that continually tests his ability to forgive and forget. With each new soul that he's entrusted to collect, he learns more about himself and his horrific decisions in life.

Through the tutelage of his befriended trainer, Jack will be compelled to make decision after decision about who gets to live and who will lose their soul.

The Borrowed Souls concludes when Jack comes to a crossroads: continue on with his eternal commitment, or forfeit the tremendous power that has been bestowed upon him. Forever.

What listeners say about The Borrowed Souls, A Novel

A different kind of Reaper!

A terrible day with a string of bad luck and betrayal, triggers Jack Duffy's depression, leading him to end his life. Jack is then, launched into a world beyond death where he is charged with the collection of souls. Continuously, he is forced to bear witness to events with certain similarities to his life. Thus, having to evaluate his decision for electing to commit suicide. Moreover, he is challenged by the morality of taking innocent souls. As he learns more about his purpose and abilities, he tests the boundaries of his role and the choice between life and death.

I thoroughly enjoyed the premises of the afterlife in the Borrowed Souls. Paul B Kohler is an exceptional storyteller, with ordinary characters in extraordinary circumstances. Kohler's captivating writing, enthralls his audience and takes them on a compelling and emotional journey, comprised of, love, hate, fear, despair, loss and forgiveness.

I wholly enjoyed every minute of this audiobook. Tom Zainea is a talented narrator, well-paced and precise. His inflections fully suited the situations and characters — especially Jack, he sounded exactly how imagined him.

Overall, the Borrowed Souls was an engaging story with a captivating plot, characters and an exceptional narrator. I highly recommend this audiobook.

I had the pleasure of receiving a free copy of this audiobook and have voluntarily left this unbiased review.

When the main character dies, he is offered a job as a soul collector. The plot follows him as he comes to terms with his own death and learns the tricks of the trade of his new career. I found the plot and writing to be fine, and the world-building was good. The narration and production worked well. Well worth a listen if you like modern day fantasy.

I enjoyed this so much even though at times it made me sad, it has also made me think more about my life.

I thoroughly enjoyed this book from start to finish. The plot moves along at a wonderful pace that never feels too fast or too slow, it unwinds allowing you to learn as the characters develop.

The story has so many parts to it, I enjoyed the outlook contrasts of the characters in relation to the sanctity of life and the necessity of doing the job assigned.
The idea of a group of soul collectors is also another refreshing alternative to the traditional grim reaper figure we have seen before.

The narration is on point with all of the characters feeling unique and across a range of accents and both male and female felt organic.

I recommend this book if you enjoy a little fantasy or science fiction, it appeals to those who love a good adventure thriller story.

A twist on your typical Grim Reaper

There have been a number of takes on the Grim Reaper in books and other media with this one being a contemporary one somewhat along the lines of the tv show 'Dead like Me' where the role of grim reaper is basically treated like a job that some people get assigned at the point of their death.

This book differs from that series primarily in the way that the reaper of this book, Jack Duffy, could only interact with those people who had died or were near death, which obviously complicated some situations in the overall arc of this book as he struggled to combat a renegade former reaper who has his own nefarious purposes for reaped souls.

The narrator gave a strong performance, giving distinctive voices to Jack along with the main supporting cast to nicely enhance the story.

Overall, this was an interesting book and I will look out for further ones in the series.

This book settles into a genre that I love, but see too little of, that being about reapers. The first time I saw this concept was as a kid, when I read Piers Anthony's On a Pale Horse. Then there was the Death of Rats in Discworld, as well as Bill Door, old Mort himself! Then came Dead Like Me, another brilliant entry into the collecting of souls, and reapers have appeared on Supernatural the TV show as well. There are a few other books out there, but you get the idea. This is a pretty good interpretation of who reapers are, and how they do their job.

The story is interesting, and it kind of reminds me of Beetlejuice, with the afterlife beauracracy and such, but the similarities are only cursory. This book stands on its own, with two solid legs. The legs belong to Jack Duffy, the protagonist. He is a character that you love to see going from one situation to another, and revel in his learning and improving as he goes along. He is a likable fellow in a tough situation, and his story is so compelling that once he gets going on his little adventures you will be shocked that the book has ended so soon. I really hope that there is more to this story, as it was fun, fascinating, and five stars full of awesomeness!

I've listened to a LOT of narrators on Audible, and have a few favorites, and I have to admit that Zainea could quickly be added to my favorite stable of vocal artists. He does really well, and is, for all intents and purposes, Duffy. I don't say that about a lot of narrators, but Zainea really plays the part of Duffy to a tee.

This is a properly fun and interesting book that leaves you wanting more. Get it today, and prepare for the afterlife. Even though I did receive a promo code for this review it in no way influenced my considerations of the material, and in fact, inspired me to be more honest. In fact, getting a code generally makes me harsher as a reviewer as I am more often concerned what someone like Me will decide based on my review.

I found this audiobook very interesting. It is a little different than my usual reads but kept my attention throughout. The narrator has the perfect voice for this book. I really enjoyed the Reaper.

I found the perception of the Afterlife very Interesting to contemplate. What a unique way to look at the Afterlife. The author's building up the depth of the characters slowly throught out the story was Very well done.

I was genuinely surprised by this book. The situations that Jack had to deal with and knowing the guidelines he was to follow really had me thinking. I would not have lasted as long as Jack did. I really liked the narrator's performance. I received this audio book for free through Audiobook Boom for my unbiased review.

This was an interesting story of the afterlife. It is well written and entertaining. The narration is also well done. All in all, a great book and listening experience.

Definitely a different spin on the afterlife - jobs and all. Really enjoyed the reaper with a conscience angle. Good listen.

Soul collectors instead of a grim reaper

I would give this actually 4.5 stars. It was a very interesting book about what happens when we die in this case instead of the usual grim reaper we come to know there are those existing in a different plain that collect the souls as we die. Most souls have gone through several lifetimes very few are newer souls or virgin souls. It also battles with if you were personally this person what sort of challenges you would face. I do enjoy paranormal and this would count as this.

The story has an interesting depiction of the afterlife. The many different stories keeps things moving. The book reminds me a little of Scythe and the Wishlist, if you somewhat mixed them together. It has its heartfelt moments too. Very good listen with great narration. Definitely recommended.
I was given this free review copy audiobook at my request and have voluntarily left this review.

Interesting take on the afterlife!

I enjoy supernatural stories. This one is worth listening to! It’s very enjoyable, and I didn’t want it to end.

This is such a hard, overwhelming, and hearting book to listen to. The hardships the main character has to go through as he collects souls was saddening. but everything comes around and turns out happy. This is one that you should listen to .