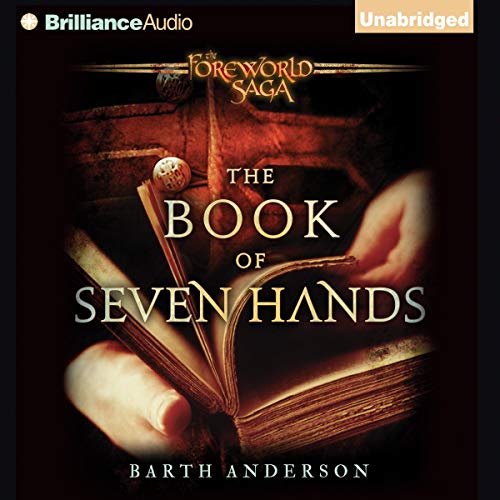 The Book of Seven Hands

Expert swordsmen Basilio and Alejo have one last mission before they go their separate ways: they must recover their teacher Don Manuel's ancient fighting manual and take it to remote Cataluña in order to have it translated by the famous alchemist Paracelsus. Unbeknownst to them, however, Don Manuel has been murdered, and a host of powerful forces has come looking for the coveted book - everyone from old lovers and lifelong archenemies to the King's assassin, and the Spanish Inquisition. The adventures of Basilio and Alejo usher in a new era of adventures in Foreworld, one wherein the Shield-Brethren, the fabled warrior monks of the medieval era, have been stricken from history. Old traditions are threatened and long-standing secrets are in danger of being revealed.

What listeners say about The Book of Seven Hands

A little complex at the end, but thoroughly enjoyable and definitely worth checking out more by this author. I am very glad I took a chance on an author I hadn't tried before.

Basilio and Alejo, an interesting pair

This was my first foray into Foreworld. Although The Book of the Seven Hands is listed as the seventh Foreworld story, but I think it stands well on it's own. If you are a fan of Fritz Leiber's Fafhrd and the Grey Mouser, Pierre Pavel's Cardinal's Blades, or Dumas' Musketeers, then try this. I am looking forward to experiencing the other Foreworld stories.

It's not huge (in terms of the story) but if you enjoy a little hinted at surprise or two in a book ending, you won't be disappointed.

This is the first Nick Podehl book I have listened to. I thought it added to the story.

Would you listen to The Book of Seven Hands again? Why?

I don't think I would listen again. I was a tiny bit dissapointed when I read this book to discover where the storyline had gone. Jumping way ahead in time wasn't bad from the parts of the main Foreworld Saga books but it was a difficult pill to swallow that Sheild Brethen had faded so far from who they were. I understand that the Order would change over time but I wasn't on board with them leaving behind completely. This was a book about rogues not knights.

A very difficult question. The idea of the book was great. The part about so many people trying to get their hands on it for different reasons was great. But it seemed like a story glued onto foreworld and the Order's history. It didn't seem like the same world generated this. I don't see the knights becoming rogues. If they faded with time then they faded. I would rather see the Order a minor portion of the story but hold fast to their identity.

The reader was fantastic. Many of these readers have amazing abilties to jump from voice to voice and accent to accent. Amazing reading.

It wasn't hard to pull away from this book in the first hour. The setup was complicated and long and a bit confusing. However as the story progressed I definitely wanted to know who was going to make it out at the end.

In my heart of heart I hope this is not the fate of the order.