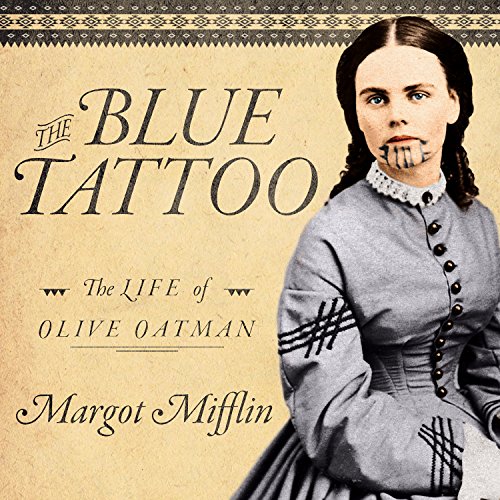 The Blue Tattoo: The Life of Olive Oatman

Women in the West, Book 1
By: Margot Mifflin
Narrated by: Kaipo Schwab
Length: 6 hrs and 47 mins
Categories: History, American
5 out of 5 stars 4.8 (8 ratings)

The Blue Tattoo: The Life of Olive Oatman

In 1851 Olive Oatman was a 13-year-old pioneer traveling west toward Zion with her Mormon family. Within a decade she was a white Indian with a chin tattoo, caught between cultures. The Blue Tattoo tells the harrowing story of this forgotten heroine of frontier America.

Orphaned when her family was brutally killed by Yavapai Indians, Oatman lived as a slave to her captors for a year before being traded to the Mohave, who tattooed her face and raised her as their own. She was fully assimilated and perfectly happy when, at 19, she was ransomed back to white society. She became an instant celebrity, but the price of fame was high, and the pain of her ruptured childhood lasted a lifetime.

Based on historical records, including letters and diaries of Oatman's friends and relatives, The Blue Tattoo is the first book to examine her life, from her childhood in Illinois - including the massacre, her captivity, and her return to white society - to her later years as a wealthy banker's wife in Texas.

"Recommended for general readers as well as students and scholars." ( Library Journal)

this book was very factually informative. I would have loved to hear more about Oliver's days with the Indian tribes

2/3s of this book is about the BOOK, not Oatmen

The title should be "How the Book Came to Be". I am returning it. Writing and reading just average.

Margot Mifflin has sorted through the litany of speculative anecdotes about Olive Oatman's life before, during and after her captivity to bring the most accurate biography possible. Not only has she attempted to delineate fact from fiction, but she also addresses the plausible reasons for inaccuracy (some by Olive herself) and many of the perpetuated myths about this tattooed lady.

It's nice to have some legitimate historians reviewing the apocryphal biographies that have been allowed to pervade our knowledge of history. Modern media is a culprit of such violations (e.g., portrayal of a fictional character, but stealing Olive's tattoo and history in television) but isn't alone; Oatman's biographer took many liberties to better sell the story. As previously mentioned, numerous accounts attempted to frame the story to suit the narrative of the time (e.g., the American Indians were all savage brutes waiting to steal everyone's daughters and therefor must be annihilated).

It's actually quite ironic that Ms. Mifflin decries the provocateurs seeking to gain monetary advantage by selling this tale with falsehoods yet herself inaccurately uses the "Mormon" tagline description of Olive and her family. Ms. Mifflin describes in full detail the exact break between the Mormons in Illionois and the separated and Mormon unaffiliated Brewster company her family was traveling with when her family was slaughtered. She then tries to slander the Mormon faith by providing snippets of texts from the Book of Mormon and tacitly surmising that Mormons believed their ancient scriptures prophesied an "assimilation of Indians" that would result in their skin turning "white and exceedingly fair and delightsome." See what I did there Ms. Mifflin... not very fair is it. This is what garnered only a four star rating instead of your deserved five.

Although the narrator wasn't horrible, he did randomly emphasize words in every sentence; sometimes choosing multiple random words within the same sentence.

So many mispronunciations in a book trying to be historically correct. Super distracting. Gila River, saguaro cactus, Quechan Indians, Cocopah Indians. Any school child in Yuma AZ could help you out. Please re-record.

This story attempts the filter through the facts and fiction of the true story of Olive Oatman! It is just incredible! Whether there is still fiction or if it's 100%, this story is heart wrenching endearing and fantastical! To hear that there were other slightly similar tales is also mind boggling! I especially love the reading of the actual letter at the end! Wonderful book that I highly recommend for readers and writers of the Old West, Native American History, American History and Historical Romance!

Narrators and producers need to do their homework.

When reading a piece of western history, the narrators and producers need to do their homework and learn how to pronounce place names that aren't Anglo, the number of errors, particularly the mispronunciation of one of the key landmarks the Gila River (the "G" is pronounced like at "H") is incredibly distracting. There are also problems with saguaro cactus, mesa, some names of native tribes... It's a disappointing production.

I loved the history

struggled to finish. the guy reading could put a person to sleep with his reading.

First, it is pronounced “H” ila river not Gila - other pronunciations are incorrect as well.

I expected to hear this woman's story in the first person .... but instead I felt that I was sitting in college "History 101" while a professor reads aloud from a text book.
Trying to figure out how to return!!

The book was great, though short. But the reader was just about the worst I've ever heard. His pronunciations were consistently way off the mark.