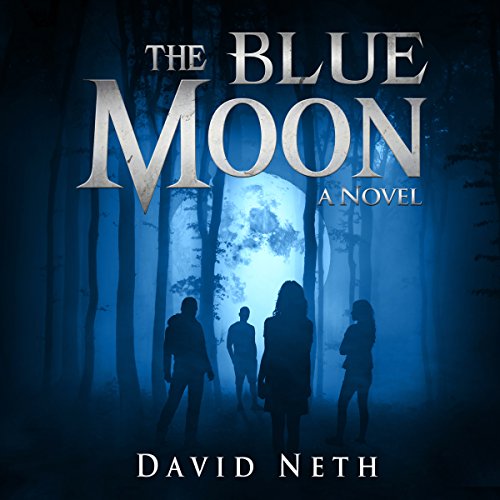 The Harpers, once a heroic family of witches, are broken. The loss of Chris and Holly's daughter was the final straw in a series of heartbreaks and now they've given up on fighting for the greater good.

New secrets help point to the fate of their daughter. Working together again, they struggle to reclaim the life they once had, but 10 years away from each other comes with consequences. Tensions are high as each witch grasps at every opportunity to restore their family, including working with former enemies.

While the witches learn to work with each other again and move on from the past, they leave themselves susceptible to the influence of the Fire Wizards and the Pentad, demonic super-groups that may be the end of them.

The Blue Moon is the fifth and final audiobook in the Under the Moon Series.

What listeners say about The Blue Moon

Not having read any of the preceding (four) volumes of the Under the Moon series, I initially struggled with the family dynamics, but only briefly. Soon, this ongoing story of a family once divided and now in grief after the abduction and possible killing of the young daughter of one of the couples plus their individual and united attempts to find her, soon gripped me, especially as the opponent's seemed so much more sinister and capable against the simple spells the witch family was able to exert. Then there was the Chaos which threatened everyone: what was it? And how could it be stopped?

The individual characters are lightly, but sufficiently, drawn. No doubt fuller characterisations came earlier in the series, progressing as the pages turned. There is enough in this book, however, to make them gently real and this is aided by their not being purely black or white but coming with flaws and definite trust issues. This is a light, enjoyable story of a family, albeit an extraordinary one, under duress and their methods of coping made even better by the narration of Nathan Welland. His pleasant voice and paced, brisk reading has good intonation and emotional content, mirroring the text, and his individual voicings, though not overly pronounced usually, are still defined and clear.

Whilst it would obviously be better to be acquainted with the earlier books in the series, this is not necessary to enjoy The Blue Moon, which can be read as a stand alone. It is a light read covering deep topics, in particular that of trust, love and family conectiveness in the face of danger.

I have tried numerous times to finish this book.I just can't.The narrators ladies voices grate on me and I have no compassion for any of the characters.In this book they are trying to find a way for the family to get the daughter back that they lost a few books ago.“I was given this free review copy audiobook and have voluntarily left this review."

If you could sum up The Blue Moon in three words, what would they be?


This is the fifth book in Under the Moon series and what I understood is the last in the series. I was lost because I mistakenly downloaded the last book in the series

it works nicely as a bed time story. sadly it isn't a totally happy affair. I got this book free from the author and this is my honest and voluntary review.

This was a good book. The ending left it open for either more in this series or for a new series off of it.

The Order of Magic

I truly loved this book it was full of action, magic and drama as they fight for family and a powerful nemesis. This book to me was truly the best one. Nathan Weiland's narration was on point. I highly recommend this series. I received this book for free and this is my honest unbiased review.

I really enjoyed the family dynamics in this book, we all can relate to family drama!! There was a good mix of magic thrown into the mix. Nathan Weiland did a superb job as narrator with easily distinguishable characters. Looking forward to more from this Author and Narrator.

This book is a must. A wonderful story with a great narrative. I received this audio book for free and voluntarily reviewed.

The Blue Moon is an exciting conclusion to a series where Witches and Wizards fight against evil and to protect their family. I had mixed feelings about the characters and their actions in the series, but overall it was pretty good.

This is the conclusion to the five book Under the Moon series. I only listened to book 4 and 5, so while these are better if you read/ listen to them all, you can enjoy this one independently as well. The narrator does a nice job.

This is the fifth book in the series and I think it is the best. It is a story that you need to focus on because the chaos is everywhere and if you miss a small detail, you can get lost.

The chaos that is coming to the Harper family, or has already shaken it can be felt throughout the story. There are so many different moving parts to the story that you will not know who to trust. Good and evil blur as the story unfolds. The story does come together in the end, but getting there is a roller coaster of emotions, events and character's lives.

This is a great, suspenseful story that is bound to entertain. The narrator, Nathan Weiland, once again gives this story life. He nails each and every chaotic scene. He has a voice that is perfect for this book.

This is the fifth book in Under the Moon series and what an ending!

Several years after, this family tries to live a normal life apart from magic.
Death separates, life brings back the family again.

Trust is a must and wise decisions with the hope they all get back together again.

Don't want to spoil your fun, but get ready to trust no one! The narrator was perfect has always.


I was given this audio book by the author. I have volunteered to write my sincere review for the book.