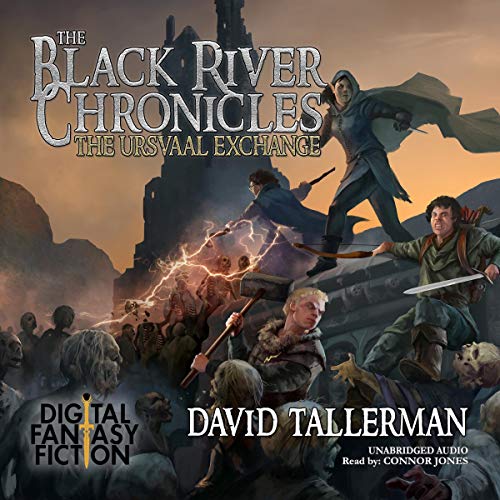 By: David Tallerman,Digital Fiction
Narrated by: Connor Jones
Try for £0.00

Student ranger Durren Flintrand had thought he was settling in at the Black River Academy for swordcraft and spellcraft. But when rebellious rogue Tia Locke uncovers a horrifying secret in the dungeons beneath the school, Durren quickly realizes that the challenges he's faced so far were scant preparation for what lies ahead. Along with magic-averse wizard Arein and blunt but good-hearted fighter Hule, he and Tia find themselves on Black River's first student-exchange program: They're being sent to the Shadow Mountain Academy in the dank and dismal land of Ursvaal, and they're going whether they like it or not.

At Shadow Mountain, things are done differently. No longer is Durren a ranger but a bard, despite his lacking the slightest notion of what being a bard involves. And not only that but Tia is acting even more strangely than usual, Hule is taking being a paladin awfully seriously, and Arein has a new party member with ideas very different from her own to contend with, in the shape of irascible cleric Cailliper Ancrux - who wants nothing less than to be involved with Shadow Mountain's unpopular newcomers.

The four Black River students will have to relearn everything they thought they knew; but the threats surrounding them aren't about to wait. Can they hope to survive an uprising of the dead, the winged horror that haunts this desolate land, and an ancient plot risen from the blackest depths of Ursvaal's history? And even if the somehow should, can Durren possibly overcome his tone deafness and learn to play the lute?

What listeners say about The Black River Chronicles: The Ursvaal Exchange

narrator might need some more experience or might be better off doing single roles. but I didnt get pass 10 mintues before returning the book.
I be continuing the series. its taboo to change narrators in a series. 😢

the story starts off a bit slow and I almost stopped listening. I kept on and by the half way mark the story was in full swing.

You get a glimpse into another academy where our student heroes get into trouble to save everyone.

The story finishes strong. I will keep up with this series.

hoping for a third

Although we loved the story we weren't as impressed with Connors reading as much as the first narrated by Allen Ross. Hated for it to end tho and really hoping for another Black River to come our way.