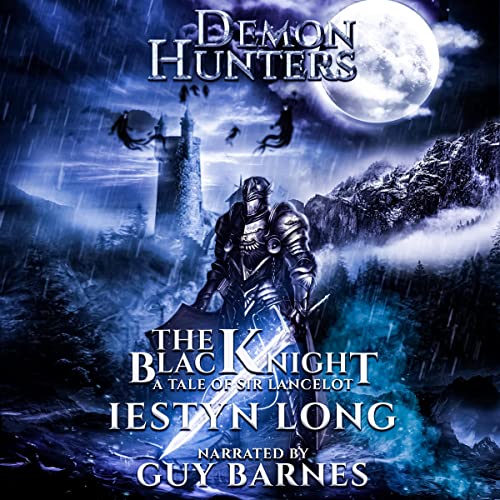 The Black Knight: A Tale of Sir Lancelot

Introducing the second stand-alone novella in the exciting new Demon Hunter series: The Black Knight: A Tale of Sir Lancelot.

Disguised as the mysterious Black Knight, join Sir Lancelot - self-exiled knight of the Round Table - on his heroic quest to hunt and vanquish demons in the lands of Albion. Yet when King Arthur's queen, Guinevere, goes missing, he must choose whether to return from the shadows to find her…but if he does, he risks everything.

"The foul scent of death filled the Black Knight's nostrils. Evil was afoot."

Dark Age evil rises. The realm is in peril. Witchcraft and sorcery plague the land. The queen is missing. The king is at war. Hope is a knight in black. Camelot's greatest champion must return to save Arthur's kingdom.

What listeners say about The Black Knight: A Tale of Sir Lancelot

I really enjoyed the book, would get the next book in the series
The character i really like is Sir Lancelot, i would recommend this book for people of all ages
The narrator was excellent

a good read, takes you back to a different time , well written, I really enjoyed it, narrator was very good.

I was given this free review copy at my request and have voluntarily left this review.
Story well written and great narration.

Grew up reading the adventures of Arthur and his many knights, this telling had a few different/deeper/darker aspects and was just as enjoyable as the ones I read in my youth. definitely reccomend for anyone who enjoys Arthurian legends and tales in general

Not your typical Sir Lancelot! This was a good story.Narration by Guy Barnes was also good.I was given this free review copy audiobook at my request and have voluntarily left this review.

While the story seemed to slow down in the middle, at least for me, the beginning and ending were both fast-paced and held my attention, no problem. I'd been looking for something out of my normal genre and with this being the first "Sir Lancelot" story that I've ever come across, it fit the bill. Either way, this was an interesting story.

I loved the narrator and the variety of voices he can do.

I only had one question. Maybe I missed this part but when did Lancelot have sex with the princess? Or why would he have done that when he was in love with Guinevere?

And my only "comment" involved why the POV changed. I don't remember how many times this happened... but this was obviously a character-driven storyline. So following the POV of a minor character isn't a norm.

I received a free audiobook code in exchange for an honest review.