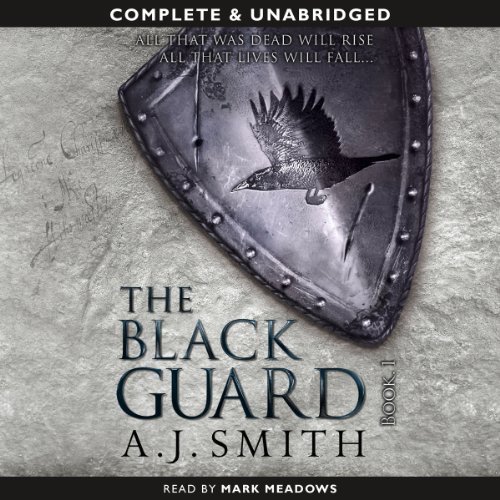 The Duke of Canarn is dead, executed by the King's decree. The city lies in chaos, its people starving, sickening, and tyrannized by the ongoing presence of the King's mercenary army. But still hope remains: the Duke's children, the Lord Bromvy and Lady Bronwyn, have escaped their father's fate.

Separated by enemy territory, hunted by the warrior clerics of the One God, Bromvy undertakes to win back the city with the help of the secretive outcasts of the Darkwald forest, the Dokkalfar. The Lady Bronwyn makes for the sanctuary of the Grass Sea and the warriors of Ranen with the mass of the King's forces at her heels. And in the mountainous region of Fjorlan, the High Thain Algenon Teardrop launches his Dragon Fleet against the Red Army.

Brother wars against brother in this, the epic first volume of the 'Long War' series.

What listeners say about The Black Guard: Book 1

Why stop with one book

Audible should really warn you about selling only the first book of a series in audiobook format , finished this book and wanted to download the other two only to find out they haven't been made in audio format grrrrrrrrrrr

Much scene setting here, and a million characters. Will get next one in series and give it a chance. Short too

I was skeptical of getting this one because it's so new and didn't have many reviews. Turns out the risk payed off. This was a really great book. It takes quite a long time to get introduced to it and it's really only worth it if you listen to the second book as well. Overall though I really enjoyed the narration and how the author introduces us to his world.