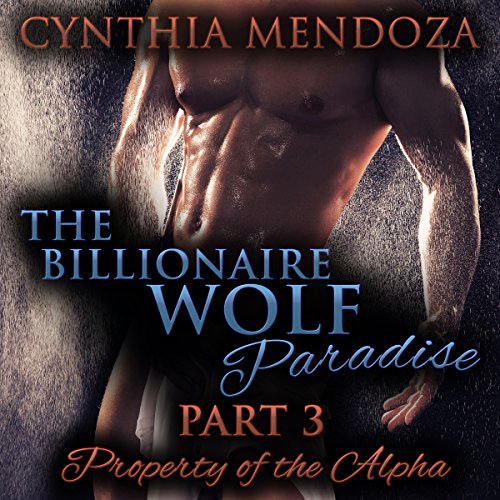 The Billionaire Wolf Paradise, Part 3: Property of the Alpha

Warning: This book contains several sizzlin' and spicy moments, so please make sure you are wearing appropriate clothing, and have the AC turned up all the way before listening!

An alpha billionaire with a werewolf secret....

Jane drew her knees up to open to him further. The movement caused him to slide in slightly and they both drew in breaths at the sudden, beautiful feeling.

"I love you," Lee said, meeting her eyes as if wanting her to see the sincerity as he looked at her.

She brushed the hair away from his face and traced her fingertips over his lips. He closed his eyes and leaned into the touch, parting his lips so that her fingers would dip briefly into his mouth.

Lee brought his hips forward slowly, letting himself savor the feeling as he sank deeply into her. Jane's body hugged him closely, shaping to him as if her body was crafted to accommodate him. He kissed her languidly as he stroked within her slowly. Each glide massaged her deeply and intensely, and she moaned softly beneath him, the sounds making him feel powerful as he felt her tremble at his touch. There was no rush to his movements as he made love to her. He allowed the feeling of her body wrapped hot and wet around him erase the rest of the day and strengthen him for what waited in the morning.

What listeners say about The Billionaire Wolf Paradise, Part 3: Property of the Alpha

I was given this book in exchange for an unbiased review via audiobook boom. Jane and Lee had to go through some things to get to the good part but that is exactly what makes them strong. I love that Jane is not protrayed as a whiney strong woman. She stands on her own yet allows Lee to be the Alpha man that he is. Can't wait for the next books. The narrator made the book come alive.

Great ending to the story

I received this audio book free for an honest review. Cynthia did an outstanding job with this story. She writes about strong women and even stronger men. I enjoyed the intelligent/funny woman (Jane), and the rich/handsome man (Lee). Kind of like Tarzan and Jane. The narrator did a great job, especially since her last name is "Wolfe". She's narrating the right kind of books for that. The story was easy to see in my mind's eye. The people, places and things were described completely. The ladies in Cynthia's books are not gorgeous (at least they don't think they are, typical of most of us). The guys are big, strong, extremely handsome and they shift (talented too). Loved it!

A lot goes on in such a short amount of time!

This is a great addition to the Billionaire wolf paradise series! The author does a great job creating interesting characters and a great world with wolf shifters.

There is a lot of action, suspense, romance, and a bit of humor as well.

The narrator did a great job bringing the story to life! Some secrets are revealed. Not everything is as it seems.

First great narration love that it's the same narrator as the last two parts. I am loving this series it has me sucked in.

Lee and Jane go through a lot in this book. But there attraction to each other is wolftastic. I didn't have a good enough word so I made one up that's how much I am loving these two characters.

Now we need to talk about Jane's best friend David. He doesn't act like someone who just found out that humans can turn into wolves. I love that you trust Jane in all things.

A little scene between Jane and David that I love and have to share.

"But I like him." -David
"I don't care if you like him just because he is a wolf doesn't mean you get to lick him while I'm talking." -Jane

These 2 crack me up! I want more of the series more more more!!!

*All my reviews are 100% honest and my own.*
*This Audiobook was given for an unbiased review via Audiobook Boom.*

Is that the end?

I was given this book in return for my honest unbiased opinion. I love this series. It isn't your typical shifter story and that is what I enjoy about it. The narration was great and the storyline is as well.

Jane's falling in love , I think the story was very well done enjoyed it very much