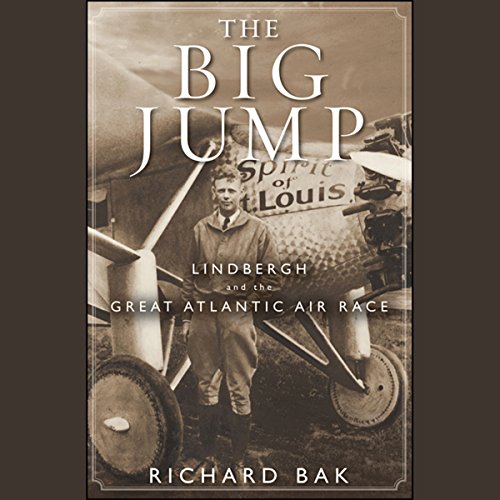 The Big Jump: Lindbergh and the Great Atlantic Air Race

The Big Jump: Lindbergh and the Great Atlantic Air Race

The trans-Atlantic air race of 1927 and the flight that made Charles Lindbergh a hero.

The race to make the first nonstop flight between New York and Paris attracted some of the most famous and seasoned aviators of the day, yet it was the young and lesser known Charles Lindbergh who won the $25,000 Orteig Prize in 1927 for his history-making solo flight in the Spirit of St. Louis. Drawing on many previously overlooked sources, Bak offers a fresh look at the personalities that made up this epic air race - a deadly competition that culminated in one of the 20th century's most thrilling personal achievements and turned Charles Lindbergh into the first international hero of the modern age.

History and the imagination take flight in this gripping account of high-flying adventure, in which a group of courageous men tested the both limits of technology and the power of nature in pursuit of one of mankind's boldest dreams.

Not necessarily about Lindbergh....

This book focused more on the "Big Jump" than it did on Lindbergh in my opinion. It wasn't until the last 20% of the book that Lindbergh was focused on...most of the book leading up to it was everybody elses failed attempts. Is a great general overview, but I was looking for Lindbergh specific information.

A great book covering all major characters in the race to be the first to fly from New York to Paris. Like most conventional wisdom, the notion that Lindbergh was the first to fly non-stop over the Atlantic is neither accurate nor the most interesting part of the story.

Although the major events of Lindbergh's life are well covered, he has many co-stars which take up over half of the book. The author does a good job recreating the atmosphere surrounding the competition to be the first aviator to fly non-stop from New York to Paris, a goal with a monetary prize put up by a Francophile New York hotelier.

Over a dozen fascinating men tried before and after Lindbergh to make "the Big Jump," but they are mostly lost to history. They are resurrected here in nuanced portrayals. The author avoids sentimentality and overly technical prose making for a well paced, engaging read.

The performance is solid and clear--strong production values and well mastered.

I would recommend this to anyone interested in Lindbergh or this unique chapter in American history.