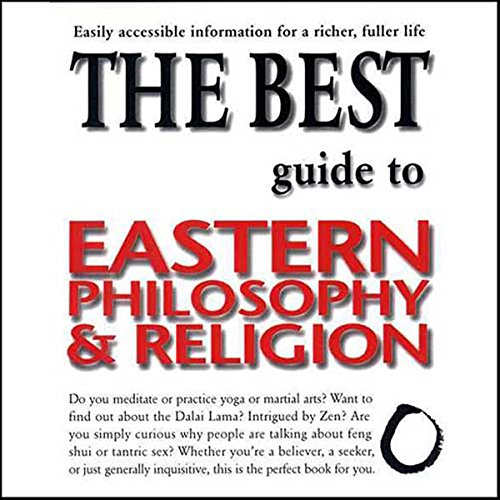 The Best Guide to Eastern Philosophy and Religion

Want to get more out of your yoga class? Explore the teachings of the Tao Te Ching? Or are you looking to achieve the Zen wisdom that makes basketball coach Phil Jackson such a success?

This examination of the ancient beliefs of Asia takes the mystery out of Eastern thought. Targeted for Westerners, this enlightening program is sophisticated in content, yet easy to follow. It provides a thorough account of the histories and beliefs of Eastern philosophies, as well as a "quick take" on the practices of the various religions.

This is the one source for everything you want to know about Eastern traditions. It includes discussions on the tenets of Hinduism, Buddhism, Confucianism, Taoism, Shintoism, and much more.

This Best Guide also elaborates on many of the Eastern practices that Westerners find most compelling, such as tantric sex, the martial arts, and feng shui. And, it explores the connection between Asian beliefs and Western writers like Alan Watts and Deepak Chopra, and Western seekers like the Beatles and Richard Gere. Whether you're new to Eastern philosophies or are a seasoned practitioner, this program will both educate and captivate you.

This book provided a good and relatively interesting discussion of the eastern religions. It illuminated the different branches within each of these religions, their history, their differences, their similarities, etc. It compared eastern to western thinking and deepened my understanding of the religion as well as the people who practice it.

dazzled by the confusing content of the different eastern religions and "philosophies"? this book will help you out! only downside: confucianism gets only 2 minutes attention...

Excellent into to Eastern Religions. I have seen only too many books that dive into arcane details and quickly lose the reader. This is a delightful intro.

That said, the word "philosophy" should not be in the name. This is a book about religion. Period. The abridgment consists of deleting the entire section on Confucian and Neo-Confucian philosophy, a secular and important strand of eastern thought0 Neo-Confucianism is particularly important, as it combines tyhe strenths of Confucianism with those of Bhuddism.

This is an unfortunate omission. For those interested in Chinese Philosophy, I recommend Gardner's Zhu Xi's Reading of the Analects. 2003; Columbia U Press.

How the 'other side' worships...

Excellent overview. Details for the knowledgeable, and scope for the novice. It is rare to read an unbiased review of comparative religions. In reality, one usually perceives an authors view bleed through. This is truly the "Best guide...." I have seen. My only complaint is that they had to cut one of the religions out for the abridged version...but because the book is so educating, I'm not going to tell you which one! If you are not conversational about Eastern Religions, you need to read it!

I loved it from start to finish. It's easy to understand. I want to share it with my friends ❤️