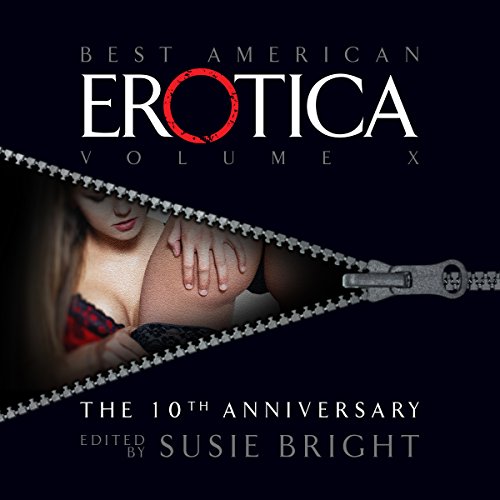 The 10th anniversary edition of The Best American Erotica includes the most esteemed and lascivious writers at work today.

In candid Q&As, the authors reveal that they are great-grandfathers, prostitutes with Ivy League diplomas, and former lunatic asylum attendants.

What listeners say about The Best American Erotica: The 10th Anniversary Edition

I'm a huge fan of Susie Bright, but I didn't enjoy this. Production-wise, I didn't like the fact that each new story started abruptly, actually before you realized that the last one was over. If there had been a longer silence, or preferably some music, it would have flowed better.

Seeing the title 'erotica' lends my imagination that Susie Bright will once again provide the listener/reader with enjoyable product. This was a good listen. I only hope that the "Best of ..." series will continue to bring us past as well as future editions.

Fun Stories to Pick and Choose From

If I could have rated this one zero stars I would have. This is the worst "erotica" I have heard on Audible. This doesn't even come close to "Penthouse - Between the Sheets".

The stories are lame and the readers are lame. There is much better fare available so I strongly suggest you avoid this one completely. However, I have to admit that I haven't listened to the entire book. Once I got to the story about the homosexual soldiers I had enough. Even the stories leading up to and surrounding the "erotica" in the book are BORING! Trust me - skip this one completely. The 5 star ratings must have been posted by the authors.

Thinking of myself as a very open-minded and imaginative person, this title caught my eye. I found this book taking me to places even *I* didn't want to go! If you're into bizarre, extreme fetishes and expanding your fantasies further than any one person's imagination can take them, then this is for you. I don't remember how many selections were included, but I doubt there were enough to count on one hand that weren't a complete turn-off. I wish Audible allowed a 0-star rating for this one.

Awful - I erased it

Do Not Waste Your Time

This is a ridiculous book, not erotica but more of a laborious accouting of how good certain authors are and how the book came together, mostly gay and mostly boring. Do not waste your time.

some ok some not

I enjoyed the stories that I found were my cup of tea, and skipped the others, but isn't that always the way in these type of compilations. I feel you will get your moneys worth but don't expect to like all of the stories.