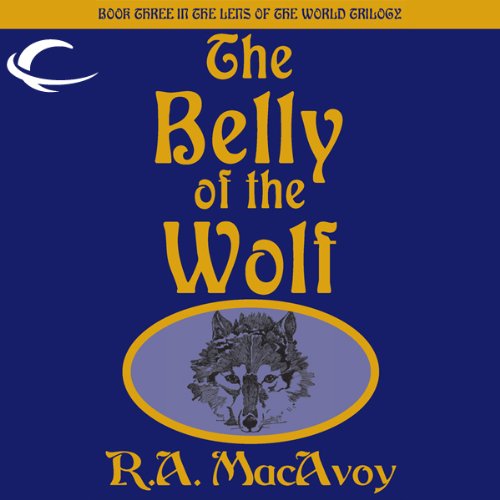 The Belly of the Wolf

By: R. A. MacAvoy
Narrated by: Jeremy Arthur

Half-student, half-servant in the military Royal School of Sordaling, where he appears short and ugly to his tall Velonyan companions, Nazhuret is forced out at age 20. He is taken on by Powl - a mysterious individual learned in arts such as astronomy, war and languages - who teaches Nazhuret, above all, to control his body and mind. After several years, Nazhuret begins to find his own way, traveling around Velonya as an itinerant optician and befriending a wolf. Going south, he works as a bouncer in a tavern, where he discovers his mixed heritage: he is part Rezhmian, of a neighboring country often at war with Velonya. When he discovers a plot to kill King Raduf, Nazhuret's training, both of body and mind, is sorely tested.

MacAvoy's complex realm is full of confusion and ambiguity, in which, as Powl says, "You, Nazhuret . . . are the lens of the world: the lens through which the world may become aware of itself. The world, on the the other hand, is the only lens in which you can see yourself."

What listeners say about The Belly of the Wolf

The Belly of the Wolf is the third book in R.A. MacAvoy’s LENS OF THE WORLD trilogy. My review will spoil some of the events from the first two novels, Lens of the World and King of the Dead, so you might not want to read it before reading those books. If you have already read and enjoyed those two previous novels, I feel certain that you’ll like The Belly of the Wolf, too. It’s similar in style and tone and there’s a little bit more action in this one.

It’s been many years since the events of King of the Dead, in which Nazhuret and Arlin (again) saved their country from tragedy. Now Nazhuret is 55 years old, Arlin is dead, and their daughter Nahvah is a grown woman with a fascination for pistols. Father and daughter are living a quiet life in a university town where Nazhuret practices as an optician and a teacher and Nahvah studies medicine. But world events just can’t leave them alone, especially after someone has published Nazhuret’s philosophies without his permission, and the author wasn’t even accurate about Nazhuret’s ideas. Now everyone knows about Nazhuret the philosopher.

When Nazhuret learns that his friend King Rudof has died, he is once again forced to engage in the political drama and turmoil of their country. This involves assassination attempts, a duel, a voyage on a ship, an elusive sea monster, Nazhuret having his portrait painted, several extremely surly servants, lots of dreams and visions in which Nazhuret gets advice from his dead wife, an igloo, a rebelling duchy, a man who attempts to seduce him (Nazhuret is still a little confused about his sexuality), a horse that’s more like a ghost, and a wolf that’s more like a ghost. A few of these events feel a bit vague and random and the story is a little dreamy at times, but eventually they work out to a satisfying conclusion.
Once again R.A. MacAvoy give us a pensive reluctant hero on a quest to make things right in his world not with a sword (though sometimes he must wield one), but through negotiation and reason. Though Nazhuret is on the move and must attempt to beat back a rebel army in this last installment, he spends more time philosophizing than fighting. I expect this ratio of philosophy to fighting is why these books have received little attention in the fantasy community. They’re slow, deliberate, contemplative works. In a couple of years I’m probably not going to remember much of the plot of the LENS OF THE WORLD trilogy, but I will remember that R.A. MacAvoy’s prose is a joy to read and makes up for the lack of riveting action. As I keep mentioning, the prose is lovely yet economical, a style that very much appeals to me and makes me put MacAvoy on my must-read author list. I look forward to reading more of her work soon.

Audible Studio’s versions of the LENS OF THE WORLD trilogy are excellent. Jeremy Arthur, the narrator, does a wonderful job with Nazhuret. The Belly of the Wolf is 6.75 hours long.