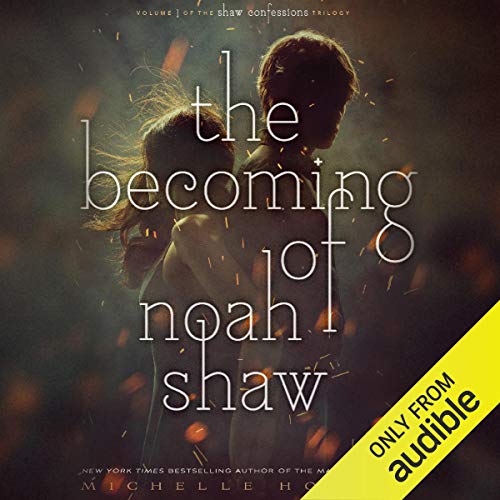 The Becoming of Noah Shaw

The Becoming of Noah Shaw

In the first book of the Shaw Confessions, the companion series to the New York Times best-selling Mara Dyer novels, old skeletons are laid bare and new promises prove deadly. This is what happens after happily ever after.

Everyone thinks 17-year-old Noah Shaw has the world on a string.

Mara Dyer is the only one he trusts with his secrets and his future.

And both are scared that uncovering the truth about themselves will force them apart.

Fans will be torn on this one

If you loved the way, the Mara Dyer trilogy ended and are in a happy place this series may upset that peace. I’ve come to learn that when it comes to Mara Dyer, nothing is ever at it seems. For me, there were a few threads, and questions like that ominous prophecy regarding Mara and Noah left unanswered so, I had to dive in.

I listened to the first series on audio, narrated by Christy Romano, so I didn’t even hesitate to go that root this time. The Dyer trilogy was told from Mara’s perspective and brief perspectives of Noah. The Becoming of Noah Shaw is narrated by new to me narrator, Joe Jameson. While I appreciated his accent for Noah, I loathed his voice for Mara, and it was jarring to hear these characters with a different voice after becoming used to Romano’s interpretation. I was like, who are these people? I understand why the publishers went with a male narrator, but for the listener’s sake, I wish they had kept Romano.

The Becoming of Noah Shaw addresses many questions, delves into Noah’s Dad, gives us Noah’s perspective and shares some rather enlightening and freakish details about Mara. Creepy characters, threats, and danger for them all kept me listening. Threads left unexplored in the first trilogy are addressed, but new questions arise, and we see flashbacks of events from the first trilogy. We knew Mara was an unreliable narrator but wowzers. I did not see that coming. I will leave you to discover them.

Noah is a complex character with not only baggage but a gift that often feels more like a curse. He’s depressed and unsure, and Mara is his anchor. We all know Mara is the anti-hero and Noah will be tested. The story offers a mystery as something is happening to the gifted ones. As always Hodkin hooked me, and despite not being thrilled with the narration, I need to know more. Noah has his father’s files now, and I just want to sit down and read them all…

Despite the narration, I loved this story as much as the others. These are the types of books that keep you up until the early hours of the morning to finish listening. It’s definitely worth the credit or the money! So glad I found this series!

I was introduced to the Mara trilogy by the Michelle Hodkin at a book reading for the very first book. I read the first chapter and refused to read any more until the entire series was out. I have been waiting a long time for this and I have not been disappointed. Thank you so much Michelle for the story.

What disappointed you about The Becoming of Noah Shaw?

The whole story was unnecessarily confusing and the ending/cliffhanger felt like Michelle Hodkin ran up, chucked a physical, hardback copy of the book at my face, then kicked me in the shin for good measure. I wasn't even that big of a fan of the original trilogy so I can't imagine how longtime fans must have felt.

What was most disappointing about Michelle Hodkin’s story?

It's hard to use the word "disappointing" because it implies that I expected or wanted something out of it when, in actuality, I had pretty much no preconceived notions about this book. I felt like the original trilogy wrapped up just fine so the moment I heard this would be a direct sequel, I was skeptical, to put it kindly.

What character would you cut from The Becoming of Noah Shaw?

This is a hilarious question. It's Goose, though, if I had to pick. Definitely Goose.

Honestly, this book was so hilariously mean-spirited that I can't help but wait for the next book, even if it means another book to the face and/or kick to the shin because I haven't been this entertained by a Michelle Hodkin book since The Unbecoming of Mara Dyer...except I don't think the parts that entertained me so much were meant to be so hilarious.