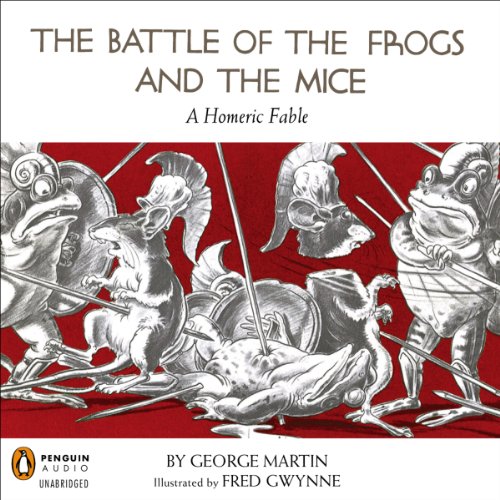 The Battle of the Frogs and the Mice

The Battle of the Frogs and the Mice

You will never see war the same way after reading this extraordinary retelling of an ancient Greek fable about a tragically unnecessary battle between mice and frogs. This miniature masterpiece ranks with Animal Farm as one of the greatest parables of human foibles. Originally published in 1962, The Battle of the Frogs and the Mice tells in words and pictures a classic tale of the foolhardiness of war. When Crum-snatcher, a Mouse, cautiously mounts the back of Puff-jaw, King of the Frogs, to explore the frogs pond, the Mouse meets with a disaster which soon brings the two nations into mortal conflict. The course of this tempest in a teapot is developed with wit to assume heroic proportions, and the battle of this small world becomes the story of wars through the ages.

George Martin has made an imaginative, free adaptation of a fable originally ascribed to Homer, but now believed to have been written about 300 years after him by an unknown author.

This short but brilliant ancient satire on the very human foibles that lead to conflict and the havoc they cause needs to be more widely read.

Where does The Battle of the Frogs and the Mice rank among all the audiobooks you’ve listened to so far?

Have you listened to any of Graeme Malcolm’s other performances before? How does this one compare?

Great story for children, young adults, or even the grey haired crowd. A warning of the impulse to rush to war, told in Homeresue prose. Think Robert E. Howards' prose verbose? Conan overdone? Hear how wrong you are as Cabbage Eater and Troglodyte war. Great story, told very, very well!