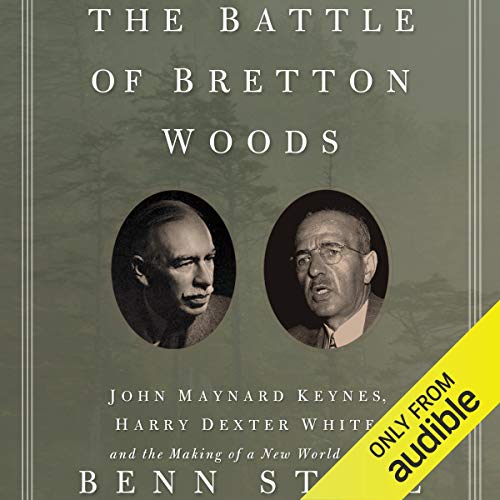 The Battle of Bretton Woods

When turmoil strikes world monetary and financial markets, leaders invariably call for "a new Bretton Woods" to prevent catastrophic economic disorder and defuse political conflict. The name of the remote New Hampshire town where representatives of 44 nations gathered in July 1944, in the midst of the century's second great war, has become shorthand for enlightened globalization. The actual story surrounding the historic Bretton Woods accords, however, is full of startling drama, intrigue, and rivalry, which are vividly brought to life in Benn Steil's epic account.

Upending the conventional wisdom that Bretton Woods was the product of an amiable Anglo-American collaboration, Steil shows that it was in reality part of a much more ambitious geopolitical agenda hatched within President Franklin D. Roosevelt's Treasury and aimed at eliminating Britain as an economic and political rival. At the heart of the drama were the antipodal characters of John Maynard Keynes, the renowned and revolutionary British economist, and Harry Dexter White, the dogged, self-made American technocrat. Bringing to bear new and striking archival evidence, Steil offers the most compelling portrait yet of the complex and controversial figure of White - the architect of the dollar's privileged place in the Bretton Woods monetary system, who also, very privately, admired Soviet economic planning and engaged in clandestine communications with Soviet intelligence officials and agents over many years.

A remarkably deft work of storytelling that reveals how the blueprint for the postwar economic order was actually drawn, The Battle of Bretton Woods is destined to become a classic of economic and political history.

What listeners say about The Battle of Bretton Woods

To a friend with a keen interest in economics, yes. As a good read, no.
Lacking any formal education in economics, much of the book went straight over my head. That much said, the bits I did get were frequently very interesting. It was often very technical, and the technical elements presupposed that the reader understood the basic concepts. That is more a failing on the part of this reader than the writer, but other readers should maybe understand that a solid grounding in economics would be advantageous before venturing forth into this book.

What does Philip Rose bring to the story that you wouldn’t experience if you had only read the book?

Whilst I enjoyed Rose's delivery, I actually did wish I had a hard copy I could easily flip backwards and forwards through, to try and get my head around some of the more tricky technical aspects.

Excellent book but not for the general reader

The premise and structure of this book is excellent. And the author is an excellent writer with an eye for detil and clear expression. Enjoyed the opening chapters. But now, half way through, am reluctantly giving up.

As usual with economics books the author doesnt hit the right pitch of understanding for the general, but interested reader. And this book is too much about economics for that not too matter.

Come on you economists, you have got to explain things in a bit more detail, without condescending to your audience. I believe this author could certainly achieve this and I hope he goes on to fill a much needed niche in this field, ie. economic history made interesting for the general reader.

Who this book would better serve might be a college economics student who wants to read a full and very eloquent account of the people and politics of the Bretton Woods negotiations.

Great book on the path to Bretton Woods

Well written book on the historical circumstances leading up to Bretton Woods and the consequences of its implementation.
Recommended to everyone remotely interested in the roots of the current economic crisis

If you could sum up The Battle of Bretton Woods in three words, what would they be?

Personality, talent, and guile clearly come to mind for me. These were two extraordinary men faced with the difficult challenges of their time.

What other book might you compare The Battle of Bretton Woods to and why?

I find this book unique in that Ben Steil does such a wonderful job of analyzing the two men and their impacts. Then he takes it a significant step further as he measures that impact through the years. Analysis of history and personalities is one thing, but the application of that thorough and detailed analysis through the succeeding years is a remarkable and extraordinary. I have seen the technique used before, but in this case I found it rich and rewarding!

Which character – as performed by Philip Rose – was your favorite?

I would have to focus on John Maynard Keynes as my favorite. I have always viewed him as a significant but somewhat obscure economic genius. To see this extraordinary talent presented and explained in such rich detail raises the man much higher on my pedestal, and I now can clearly see why his name remains a focus, even today. While I was very impressed with Harry White and his own remarkable talents as an economist, I got the feeling that he lapsed into the role of the government technocrat which reduced the shine of his own brilliance.

At times I laughed at the comments and actions of the two central characters. Harry White's involvement with subversive Communists did leave me blue, and Keynes death at 62 was a major and sad tragedy in my eyes. Even White's death at an early age due to heart attack was a tragedy as I feel it was at least in part brought on by the huge pressure of his mistakes and associations.

This is a wonderful, insightful, and well presented documentary of an event and the people involved which finally recognizes the major impact of that event. Bretton Woods was a historic watershed event of its time. The prime characters were at times giants among other men. This is a must read book!

Is this a mystery, a history or an economics book?

What made the experience of listening to The Battle of Bretton Woods the most enjoyable?

I liked all three books in one. If you want to know what the gold bugs, Federal Reserve, economists and the currency warriors are thinking read this book. Reality is stranger than life. The American seeking financial discipline at Bretton was a Russian spy. The Englishman seeking a phony money currency to bail out indebted nations was John Maynard Keynes. The same scenario plays out today: austerity or. funny money or a mix. Inflation or deflation, that's part of the mystery we all all living with. But to really get it, you have to know a little history. Terrific narration too.

No better way to understand how our world evolved to what it is today. Covers a lot of ground, and describes exactly how the sausage machine of politics really works at the global level.

So many jewels, where to begin: the birth of the World Bank and the IMF, the end of the British Empire, how the Marshall Plan almost didn't happen, the gold standard, the communist moles warping American policies to a Soviet bias over England. To mention just some of the topics covered.

Which character – as performed by Philip Rose – was your favorite?

The narration was all fine, and didn't get in the way of the I.P. of this book.

Sardonic might best describe the end result of this education. But much better understanding of certain current events, answering "now how the heck did this global outcome come about?"

I have been recommending this to all friends, but know that most in fact will choose lighter fare, sigh. Also I doubt any of the 60 million who voted for Trump would come near this. Starts a bit slow for some (not me), but really picks up steam by say, Chapter 5. A true delight for this layman.

I just finished Lords of Finance and enjoyed it very much. Bretton Woods is the subject of one chapter at the end of LoF, and I thought it would be interesting to hear a more detailed account. I just can't hang with the stiff, dry material and stiffer, drier narration.

Have an interest in history or macroeconomics?

The Battle of Bretton Woods
As a lay person with an interest in international finance and macroeconomics I found this book to be extremely enlightening and easy to listen to. It is a very thorough account of how International commerce was set up after World War II. The subject matter can be complicated so it is important to give it to your full concentration. But I feel it was well worth the time and I would even like to revisit it again at some point in the future.

Very insightful and great history of Bretton Woods and wartime currency deals. If you are into politics, you'll love this book.

What made the experience of listening to The Battle of Bretton Woods the most enjoyable?

Materiel and information is comprehensive and very well conveyed to listener.

The diplomacy and politics underlying the multi-country negotiations and the negotiators personalities.

There are numerous interesting scenarios.

Can't see the Forest for the Trees

What would have made The Battle of Bretton Woods better?

This book provides a lot of details on the Bretton Woods conference. In particular it focuses on the two main players: Harry Dexter White of the US and John Maynard Keynes of England. Much time is spent on whether White was a communist. There are memo-by-memo recountings of the formulations of US and British positions. I am sure the work is extremely well researched, but just too much detail on the events for me.

A magnificent retelling of monetary revolution

I cannot recommend this book enough. A succinct summary would be to listen to Arthur Jensen's speech from "Network" (1976)

truly amazing research here -- definitely assigning it to my students. some funny pronunciations of names and foreign words.