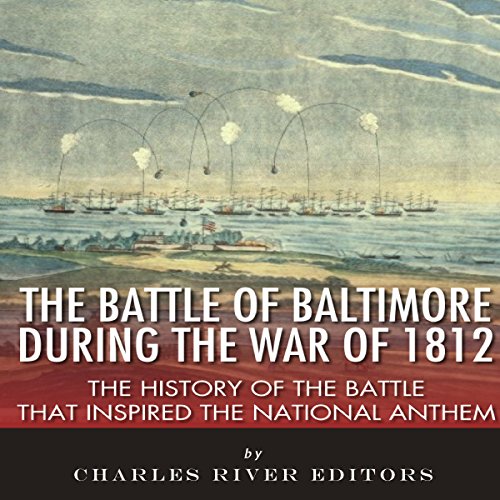 The Battle of Baltimore During the War of 1812

The History of the Battle that Inspired the National Anthem
By: Charles River Editors
Narrated by: Edwin King
Length: 1 hr and 34 mins
Categories: History, American
5 out of 5 stars 5.0 (1 rating)

The Battle of Baltimore During the War of 1812

Sandwiched between the Revolution and the Civil War, the War of 1812 is one of America's forgotten conflicts, and the stalemated nature of the war (which resolved virtually none of either side's war aims) has also ensured that it is often given merely a cursory overview. Indeed, one of the few aspects of the war that remains common knowledge is that the most famous battle, the Battle of New Orleans, was fought after the Treaty of Ghent had formally ended the war.

One other famous aspect of the war is that one of the battles inspired Francis Scott Key to pen the Star-Spangled Banner, which ultimately became America's national anthem. While the British horrified many Americans with the ease in which they sacked the capital at Washington, they faced stiff resistance around Baltimore, with American forces successfully fighting a delaying action that allowed for a proper defense of the city and its harbor.

On September 13, 1814, Key and others bore witness to a heavy British bombardment of Fort McHenry that lasted for over a day, yet they proved unable to reduce the American defenses despite trying to land an invasion force outside the fort. In the wake of the unsuccessful assault, the British pulled back their forces, spurring Francis Scott Key to write the poem "Defence of McHenry." Ironically, the lyrics to that poem would eventually go together with an old, popular British hymn to produce America's Star-Spangled Banner.

The Battle of Baltimore during the War of 1812: The History of the Battle that Inspired the National Anthem looks at the campaign that culminated with the battle and its influence on Francis Scott Key.