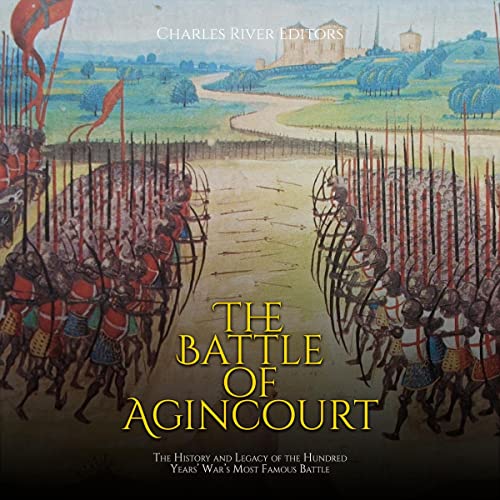 The Battle of Agincourt

Although it ended over 550 years ago, the Hundred Years’ War still looms large in the historical consciousness of England and France, even if the name of the famous war is a misnomer. Actually a series of separate conflicts between the English and French monarchies, interspersed with periods of peace, its historical image is an odd one, in part because its origins were based on royal claims that dated back centuries, and the English and French remained adversaries for nearly 400 years after it ended.

That said, the war was transformative in many respects, and the impact it had on the geopolitical situation of Europe cannot be overstated. While some might think of the war as being a continuation of the feudal tradition of knights and peasants, the Hundred Years’ War revolutionized Western European warfare, and it truly helped to usher in the concept of nationalism on the continent. In England, it is remembered as a period of grandeur and success, even though the English lost the war and huge swathes of territory with it, while the French remember it as a strategic victory that ensured the continued independence of France and the denial of English hegemony. The legacy of the war has lived on ever since, helping determine how England became politically severed from the continent, how the knightly chivalric tradition slid into irrelevance, and how battlefield dominance can still leave a nation a loser in war.

The village of Agincourt (Azincourt in French) is located in the Pas-de-Calais, around 50 miles south of Calais, near the French border with Belgium. It has a population of around 300 and, but for one event, would otherwise be an obscure French settlement. Of course, that one event was the Hundred Years’ War’s most famous battle, the Battle of Agincourt, which served as a fine representative of all the changing trends in warfare and geopolitics in France. By the time the two sides fought at Agincourt, archers formed a special part of the English army, beneath the men-at-arms but above the ordinary infantry. They wore leather body armor, sometimes with metal plates, and helmets or chainmail hoods. For close combat, they carried swords, mallets and daggers, including the misericord, a special type of dagger designed to slip between the armor plates of a fallen enemy and finish him off. The glory days of the heavily armored mounted knight had long since passed, and at Crecy and Agincourt, English longbowmen and men-at-arms would decimate the flower of French chivalry, rendering the medieval cavalry charge little more than a romantic folly.

Agincourt was a hard-fought battle, and Henry V at one point ordered prisoners executed to avoid allowing them to be rescued, but in the end, the English won a decisive victory, taking 1,500 prisoners and marching on safely to Calais. However, while the victory at Agincourt consolidated the English position in 1415, to a large degree it made little strategic difference by the end of the Hundred Years’ War, which saw England almost entirely pushed off the continent with the exception of their possession of Calais.

Nonetheless, even if the practical effect of the Hundred’ Years War on England was glory followed by ruinous strife, its place in English culture remains a celebrated one. The war encouraged a sense of shared national unity in the face of the French, it created national icons out of leaders like King Henry V, and the mythology of the humble but determined English infantry was born out of the mud of Agincourt and the success of English peasant longbowmen against the ostentatiously upper-class French men-at-arms. Today, when the English think of the war, they are more likely to ignore the burning cottages and the payment of ransoms and instead remember the brave words put into Henry V's mouth centuries later by Shakespeare: “Once more unto the breach, dear friends, once more."

What listeners say about The Battle of Agincourt