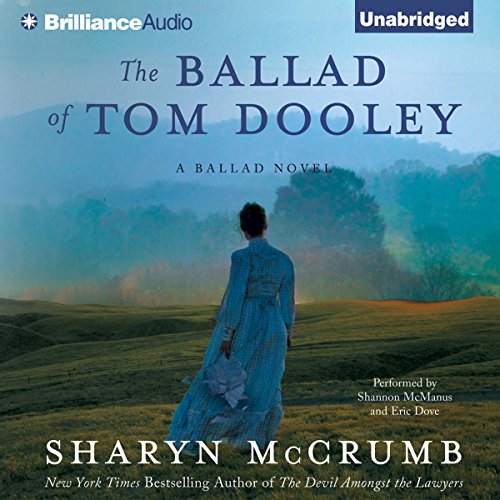 The Ballad of Tom Dooley

The Ballad of Tom Dooley

The Kingston Trio’s folk song “Tom Dooley” tells the story of the murder of Laura Foster, a simple country girl involved with returning Confederate soldier Tom Dula. But Tom was also engaged in a passionate affair with his childhood sweetheart, the beautiful - and married - Ann Melton. One May morning in 1866, Laura Foster stole her father’s horse and left home, telling a neighbor that she was eloping to Tennessee. Three months later, her body was found in a shallow grave only a few hundred yards from where she was last seen. The sensational elements in the case attracted national attention: a man and his married lover accused of murdering the other woman; the former governor of North Carolina, spearheading the defense; and a noble gesture from the condemned man on the eve of his execution, saving the woman he really loved.

With the help of Wilkes County historians and researchers, author Sharyn McCrumb visited the actual sites, studied the legal evidence, and concluded that the traditional story did not make sense. Consulting the maps, the trial transcripts, and the census records, she uncovered a missing piece of the story that will shock those who think they already know what happened.

What seemed at first to be a sordid tale of adultery and betrayal has been transformed by new discoveries into an Appalachian Wuthering Heights. The fictional retelling of the historical account became an astonishing revelation of the real motives and the real culprit in the murder of Laura Foster.

I had my hopes up, hearing that McCrumb is a great southern writer. Not so much with this attempt. Badly edited, there are entire passages that are identical; so much so that at one point I thought I'd inadvertently skipped backwards. The story, large in scope, with complex characters, here is narrowed down to a single sociopathic viewpoint. The attempt to provide counterpoint with Zeb Vance's voice is not enough. Everyone in this book comes off petty, mean, hateful, and at the end, it just leaves a bad taste in the mouth. The final insult is the reader. She reads the book, but she does not act it. The anti-heroine, Pauline Foster is read in a soft, light sing-song. The inner rage and resentment that fuel her world view and her actions are nowhere to be found. She could only manage one Southern accent, so that when she had to be, say, the rich planter or the doctor, she was reduced to a northern accent to make them sound cultured and intelligent. A Southern book deserves more complexity than that. I might try this book again on the page as the reader just butchered it, but I don't hope for much.

I expected much more

Sharon McCrumb is so talented, and I was hoping for some insight into the ballad, but this gave me no more than the song, really. I don't understand the reason for the two narrators. I was originally intrigued by Pauline, but she quickly dissolved into a one dimensional villain. Zebulon Vance provided history of the 1860's, but didn't provide any information or insight. I don't know what his purpose in the story was supposed to be.
We all know that the South lost the Civil War, that rural life is hard in the 19th Century, and that Tom Dooley dies, I wanted a better back story than this.

I really enjoyed both of the narrators acting. They easily had me convinced that they were living in 1866 & were the characters whose voices they portrayed. My only complaint is, the story was slightly repetitive in some parts.I suppose that is in keeping with a true ballad. Which is why I Gave it 5 stars.The story was captivating & the female characters had all the charms of a modern day soap opera. I loved it. Kept my attention & even kept me guessing. I am becoming a big fan of McCrumb's novels & writings. Her attention to detail & history is excellent. Her characters are damaged yet fascinating to watch.

The Story of My County

Would you consider the audio edition of The Ballad of Tom Dooley to be better than the print version?

I have a reading comprehension problem. I prefer to read aloud to another person or have a person and I go back and forth with reading aloud. It doesn't help that I never much cared for the story of Tom Dula and Laura Foster even though I live in the county this legend is from.

My favorite character is Pauline Foster. She is so magnificently nefarious. She has manipulated everyone and no one seems to notice. She has the simple wish to just watch Anne crash and burn.

I don't have a favorite scene, but I do enjoy many of the lines of Pauline Foster. Her wickedness shines though everything. She has the power and has the ability to hide it and make the situations worse. She portrays this through her worst of lines. She knew what she was doing and didn't seem have any remorse to watch her kin fall flat.

Absolutely love her stories. I have both read the written work and enjoyed the narrated unabridged version multiple times. This one is among my favorites.

An overly long historical novel, with characters too exhaustingly described and totally unendearing. I would encourage subscribers not to waste their time nor credit on this book.

Being well acquainted with the author's tallent for storytelling and her habbit of meticulous historical research from her work on The Ballad of Frankie Silver, which I also reviewed, I went into this book expecting strong narrative, lots of period detail, and fleshed out characters. I wasn't disappointed in any of these expectations.

The novel is a first-person retelling of the events that ultimately led to the hanging of ex-Confederate army soldier Tom Doola, twice convicted of the murder of Laura Foster and hanged at Statesville, North Carolina on May 1, 1868. The story of that murder is told, with many changes to the facts, in the famous song ‘Tom Dooley'" recorded by The Kingston Trio in 1958. The story as told in the novel is based far more on the facts and posits Ann Melton as the killer, with Doola as the accomplice after the fact who helped dispose of the body. That alone would have been enough to hang him in any case.

The novel is told in two first-person voices, performed by two narrators. The main voice is the character of Paulene Foster, a syphelitic, and possibly also a sociopathic, young woman who was a cousin both to Ann Melton and Laura Foster, all three of whom having been erstwhile sexual partners of the accused. The protagonist, if that's the right word for her, is a cold, ruthless person with no regard for anything or anyone. I say she may be a sociopath, though, because at several points throughout the story, she communicates that she doesn't understand emotions and has to remind herself to simulate the socially expected emotions at various times. She also displays a seemingly total amorality concerning anything we might frame in terms of right or wrong Altogether she is a character we don't like and can't root for. She is, to the end, coldly calculating, and she walks off the last pages of the novel, and out of history too for all we know, very much the same.

The other narrative voice is that of Zebulon Vance, ex-Confederate governor of North Carolina, who served as Tom Doola's lead defense counsel and represented him pro bono. Vance is telling this story in retrospect. He is an experienced politician, and it is his advancement in politics that motivated his brief stints as a lawyer. The whole affair seems to be a brief, minor, and unfortunate legal case for him. Indeed, I'm not sure it wound up in his actual biography. It is his narrative voice that relates the events surrounding the actual hanging of Tom Doola, and it is his voice that ends the story. Doola hangs, Melton walks free, and Paulene Foster fades into the obscurity of history.

Overall, this story is very good, but it isn't as good as The Ballad of Frankie Silver. There are several reasons for this, in spite of similar narrative devices. Firstly, there is no one in this novel who remotely warrants our sympathy. Tom Doola, for example, may well have still been guilty of a hanging offense, if not the murder itself. And even if, as the story suggests, he was baptized and died with his spiritual affairs in order, one cannot help but regard his life as a waste and his execution as exactly what one would have expected. None of the Foster cousins, excepting the murder victim, are given any redeeming qualities that would make us like or at least sympathize with them. Finally, the character of Zebulon Vance comes across as not particularly invested. He's a man with a job to do and does it. All this leaves the reader wanting to like someone or to care about someone, and we can'!. cannot. All in all, I'm left with the feeling that the world is well rid of these trifling low-down scumbags. And that's not the feeling you want, usually anyhow. Still, it's undoubtedly a feeling brought about by the author's skill in depicting these people as they were, without exaggeration or softening of the facts of their characters for the sake of story. So while it's a little unusual to read a story with no heroes and where no one warrants our good feelings, this is such a story.

Sharyn McCrumb puts you in the locale

What did you love best about The Ballad of Tom Dooley?

What an interesting plot! There are mean people all over the place from every time period and this points it out!