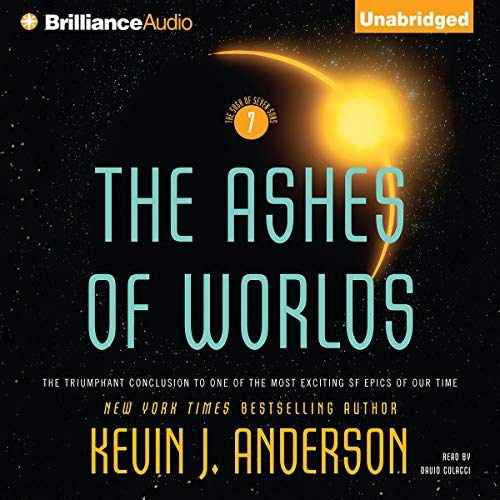 The Ashes of Worlds

By: Kevin J. Anderson
Narrated by: David Colacci
Try for £0.00

The culminating volume in The Saga of Seven Suns weaves together the myriad story lines in a spectacular grand finale. Galactic empires clash, elemental beings devastate whole planetary systems, and the factions of humanity are pitted against one another. Heroes rise and enemies make their last stands in the climax of an epic tale eight years in the making.

The Saga of Seven Suns is one of the most colorful and spectacular science-fiction epics of the past decade.

What listeners say about The Ashes of Worlds

For those who read the previous 6 books this was a great final book! Exciting with great narration.

Satisfying Conclusion to a Great Series

There are several aspects about this book and series that I don't love. For instance, the Basil Wenceslas character (Chairman of the Terran Hanseatic League) behaves too much like a spoiled 12-year old brat rather than the cruel-yet-sophisticated man that the author describes him as. But, points of complaint such as that ought to be set aside with consideration to the series as a whole. And as a whole the Saga of Seven Suns is wonderful and Ashes of Worlds is its fitting end.

Colacci's narration is, on the whole, excellent. Is he always consistent in his character voices? Not really, but even so, his voice makes for great listening.

I've already listened to the whole saga twice in the last six months! Is it long? Well, sure. But, I hate when good books come to an end - and this great series takes a good long time to end! This is my kind of series and my favorite genre (space opera): Enthusiastic 5 stars for Ashes of Worlds and the whole Saga of Seven Suns!

Good story for my daily commute. I am hooked on the series, though its a little long and tedious at times. After getting hooked on the narrator in books 1 to 3, I still cannot get used to the accents the current narrator uses. Would it be too much for him to at least use the same pronunciations (e.g., Taah-c-a vs. Tay-sha)? Change is hard.

Glad to be done!

I read the entire series of 7 books and all-in-all I thought it was a good story. I was some what disappointed in the last book because I felt ( and this may sound odd) too many good guys lived. I needed more pathos to fell like it was all worth it. The reader with the southern accents drove me nuts. Everyone who was working class had a trailer-trash-from-texas-arkansas-mississippi-georgia-alabama-new-orleans accent. They sounded like they should have been flying Winnebagos and not mantas. But I admit, I would read the series again.

WE ARE UNDER ATTACK, BUT

BY WHOM
I liked this a little less then the other books in the series. Mostly it got to the point of ridiculous. Trees that uproot and become spaceships, a water spaceship, etc. I can take the two dimensional characters, I have read plenty of KJA to expect that, but the fantasy just became too much. I would love Anderson to write more in depth about the Ildirans or Klikiss or the Roamers and forget all the silly stuff.

If you are new to the series you of course must start at the beginning. The ratings for this series are similar to the ratings for a short story collection. Anderson has so many elements, that some appeal to some and some do not. Each book is like about five different books.
Here is how I rated the series.
Prequel---Veiled Alliances B
1. Hidden Empire= B+
2. A Forrest of Stars= A-
3. Horizon Storms=C+
4.Scatter Suns= B-
5. Of Fire and Night= B
6. Metal Swarm= B
7. The Ashes of Worlds= B-

My favorite character was Patrick Fitzpatrick the 3rd. In the first two or three books, I hated him, but he grew as a character and by the end, I liked him. The Roamers were pretty cool, they were the McGuyvers of space. They could take anything and make a working space ship out of it. They mined the gas giants for ekti star drive fuel. The Ildirans were a human like race that breed different breeds of people for different jobs. They were also all connected telepathically. The Klikiss was a race of giant insects and the Klikiss Robots rebelled against them and formed their own group. The green priest were telepathic with the world forest. If they could touch a World Forest Tree on one planet they could communicate with other priest on other planets who were connected to a World Forest Tree. So, there was plenty that I liked about the series.

The Hydrogues were an alien race that lived in the cores of gas giants. They were okay.

So, each book had something to hate and something to like. I did listen to all seven books and it is very rare for me to have the patience to go that far in any series. I suggest you start with Hidden Empire and go from there.

The first 3-4 books were great, but at this point I just want to get it over with. I was pretty much done with these at the last book, but finding that this would be the final book I thought I should at least finish the series.

But YIKES, slowly but surely the characters and plot became ridiculous. Some of the dialogue and interaction became just silly...

Still was a cool story, especially considering the scope of it all. Just wish it could have had a more realistic touch.

I reviewed a Seven Suns novel read by David Colacci before and have not much new to say. Colacci, get your voices straight... Rlinda Kett sounds like she's from Brooklyn in one book and Alabama in the next. This happens with many characters across the books... "Mr Steinman" sounds like an average old guy in one book and has a thick New York Jewish accent in another. I do recommend the series, I am just disappointed with the narration.

The conclusion to a unique saga

In previous reviews from this series I’ve noted Anderson’s imagination and the vast universe his characters inhabit. This holds true in this final volume of the Saga of Seven Suns series. If nothing else, The Ashes of Worlds is as unpredictable as the earlier installments which established the structure and civilizations of the Spiral Arm.

On the downside, there are too many holes and unexplained aspects of the power structures and motivations of the series protagonists.

The devolution of Chairman Basil Wenceslas to an irrational autocrat is interesting and gradual but his ability maintain power after making poor command decisions throughout the series is never explained. Perhaps this is what “space opera” means: high level details and grand struggles without substantiation? This is only a single example but it captures the overall lack of logical mechanics within the Seven Suns universe.

As the series progresses, plot twists become more metaphysical as elemental beings clash and ally with one another as well as the Human and Ildiran civilizations. Other races with their own motivations (usually the destruction of other races) add a bit of unnecessary complexity and length to what could have been nicely wrapped up in a coherent 5 volume series.

David Colacci is an excellent narrator who kept my interest until the end, though I was glad when it was over.

I recently listened to The Ashes of Worlds written by Kevin J. Anderson and narrated by David Colacci.

This is the seventh and final book in the Saga of Seven Suns. It's impossible to review books in a series without offering some spoilers to what came before. If this is an issue for you, I suggest you stop reading now.

This last book starts prepped for the final battle between multiple factions. The Klikiss hive breedex's have been conquering each other and the process is almost finished. The hive that assimilated Davlin Lotze is conquering most others, but what will be left of his imprinting on the breedex remains to be seen.

Basil Wenceslas continues to hold the Mage-Imperatur Jor'ah hostage on earth's moon, however, the Ildiran Solar Navy is en route to perform a daring rescue to free Jor'ah.

The Faeros continue their burning of Ildirans on their home planet, as well as their attacks on Theroc and the world forest, however, their ire is turned against Jor'ah and they seek to hunt him down wherever he hides.

The Wentils and the World forest seek to join in new ways in order to combat the aggression of the Faeros. If they don't succeed the galaxy could burn.

David Colacci continued to do a great job with the narration. Considering the amount of characters he had to voice it was a stellar effort.

Conclusion: I think, since this is the last book in the series, it's time to not only review this book, but the series as a whole. This book was a welcome conclusion to the series. It, in an ending reminiscent of Hollywood, wraps up everything with a bow. I was quite happy with the overall conclusion.

The series as a whole runs a bit long in the tooth. I honestly felt it could have ended after about the fifth book and been just fine. To be fair, I do understand why the author continued. There was, legitimately, more story to be told and he wanted to tell it.

This series is not a 'hard' scifi series but it's rather reminiscent of the early days of scifi. In early sci-fi books you could meet strange alien races with mind warping abilities and it was viewed as good sci-fi, even if no explanation was forthcoming for these abilities.

I suspect, because it hews towards this earlier view of the scifi genre, there will be many who won't enjoy the Saga of the Seven Suns. I, being a strange bloke that doesn't think the universe comes with handy explanations appended to everything, quite enjoyed it. While the series did go a bit long, it left me appreciating the Saga as a whole. T'was a long journey, but a worthwhile one.

The best story series I have ever heard.

Characters, story line, action, of any space sfi story ever told. We please read or listen to all books to understand the dynamics of characters and events.