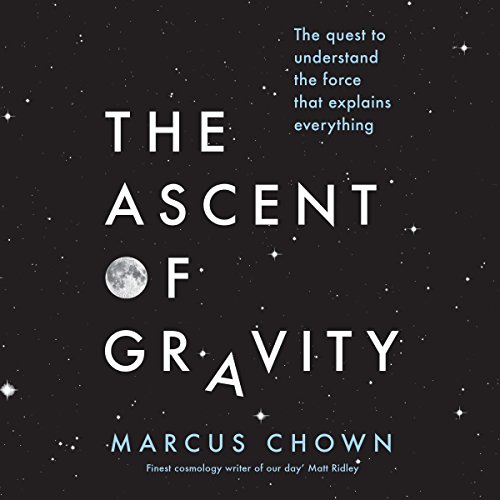 The Ascent of Gravity

By: Marcus Chown
Narrated by: Adjoa Andoh
Try for £0.00

Gravity is the weakest force in the everyday world, yet it is the strongest force in the universe. It was the first force to be recognised and described, yet it is the least understood. It is a 'force' that keeps your feet on the ground, yet no such force actually exists. Gravity, to steal the words of Winston Churchill, is 'a riddle wrapped in a mystery inside an enigma'. And penetrating that enigma promises to answer the biggest questions in science: what is space? What is time? What is the universe? And where did it all come from?

Award-winning writer Marcus Chown takes us on an unforgettable journey from the recognition of the 'force' of gravity in 1666 to the discovery of gravitational waves in 2015. And as we stand on the brink of a seismic revolution in our worldview, he brings us up to speed on the greatest challenge ever to confront physics.

What listeners say about The Ascent of Gravity

A book much bigger than it's title

I would have given top marks for the narration except for the appalling cartoon accents that littered the performance. A few words were consistently mispronounced (e.g. vacuum and Feynman) which leads me to believe this wasn't edited by a native English speaker. The book was an otherwise decent summary of the current scientific understanding of gravity.

This is a well written introduction to historical and contemporary issues in physics, and requires no sophisticated understanding of math.

One extremely annoying this about the narrator's performance is her awful, flat, and comical rendition of an American accent. She sounds like she's doing an imitation of the late Duchess of Windsor. There's no reason to do any accents at all.

Difficult at times but worth it. Very well read

Difficult at times but worth it. Very well read , recommended , gives some great insights.

I found the subject matter, content and explanation good but the entire listening experience is ruined by some of the worst narration I have encountered. The ridiculous mock accents put on when reading quotes are cringe worthy, mildly racist and totally unnecessary and made this a very difficult book to finish IMO.

A good book spoiled by the narrator

The book itself is good, a concise history of the theory of gravity. The narration would be ok, if not for the dreadful accents...some of them bordering on offensive.

I thoroughly enjoyed this audio book, it bought a marvellous subject to life, well done!

The narrator had a pleasant voice and style. But why did she decide to parody all the non-british scientists quoted by putting on a weird quasi racist stereotypical accent for the country they came from? It was really disturbing. And her idea of a Canadian accent sounded like a disney cartoon animal. As to Richard Feynman well she was so far off the mark it just played on my mind for ages. And did she really not know how to pronounce "integer"? She could have looked that one up at least.

The story and narration were really good, apart from the pronunciation of integer and vacuum - aaasrrrrgggghhhhh !

A fascinating and well rounded book

The analogues are well made, enabling clear and logical explanation of immensely complicated theories and ideas.