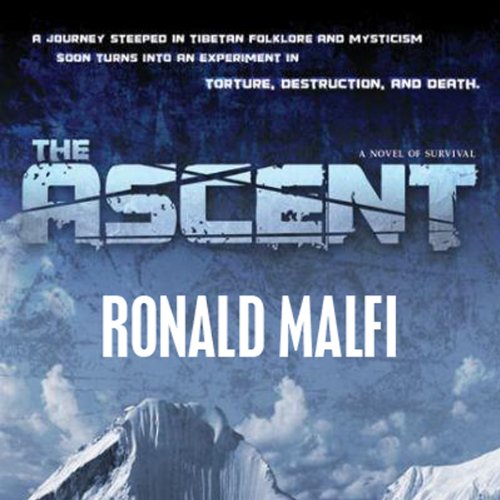 After the death of his ex-wife, successful sculptor Tim Overleigh trades in his lucrative career for the world of extreme sports, but when a caving accident nearly ends his life, Tim falls into a self-destructive depression. On the cusp of madness, an old friend convinces him to join a team of men climbing the Godesh ridge in Nepal. When this journey of mythical and spiritual discovery rapidly turns deadly as the climbers fall victim to a murderer within their group, the remaining survivors begin to wonder if any of them will escape the mountains alive.

It combines two of my favourite themes, mountains and murder!
(Also, if you're into climbing, the climbing scenes I found quite accurate, not too drawn out but explaining all the gear and techniques quite well).

Have you listened to any of Steve Cooper’s other performances? How does this one compare?

I especially picked this after his fantastic performance in 'Who Goes There' - (the book that became the film 'The Thing', also a MUST listen to)
I really do not normally like listening to American voices, sometimes too twangy for my liking, but Steve Cooper has a whole range of voices, doing justice to all the characters. And his voice has a low timbre that is quite hypnotic.

This was quite a find, initially, I have read just about every mountaineering book available and so was drawn to this. Also a huge whodunnit fan, this seemed to combine those two elements.
Not wanting to give away the plot but there are also hints of the supernatural / ghostly in this which were quite spooky. Again this was very well played out.
Like any book in these settings, a bunch of characters, stuck in the middle of nowhere, isolated, battling the elements... and then things usually start to go very wrong, and this was no exception. It kept me guessing.
A great mystery against a bleak and desolate background - what more could you want?
Give it a try.

A gripping story,keeps you on edge and it gets you in the heart of the story like you are one of the characters fighting for survivel brilliant

Good story - characters are believable. Good pace - kept me wanting to hear more just to see if they could survive. I was right there with them.

Where does The Ascent rank among all the audiobooks you’ve listened to so far?

right up there...you read for an excape as well as for fun... you get both in this story..

i can never pick.. each one does it's part on the story to bring it full circle.

getting out of the cave... don't want to tell the story..

if you can...but you do want to finish it..NO QUESTON!!

you are looking for some excitement.. read(listen) to this story! you will no be let down!!

More than a romp in the snow.

This book was a pleasant surprise as it wraps a mountaineering survival tale around a ghost story along with some mystery and suspense. It throws in some eastern mysticism for good measure. A page turner.