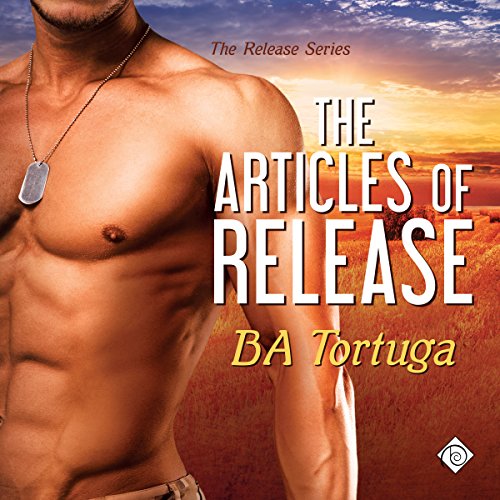 The Articles of Release

The Articles of Release

Just released from the military, wounded warrior Eric Tremaine is trying to put his life back together like the doctors reassembled his shattered leg. He's a man with no home, since his Louisiana family rejected him, so Eric winds up in Texas with his old Army buddy, Adam Winchester, and his lover, Sage.

When Eric decides to stop sitting on his ass feeling sorry for himself, he is introduced to trainer Troy Daniels, who lost both his legs in a teenage accident. Troy knows what it's like to feel as if your body is your enemy. While Eric and Troy have a bumpy start, they soon find enough common ground to make a friendship, if not more. But taking it to the next level means finding out what they have to offer each other, and the world, before they can trust that the love they find together won't cause more pain than pleasure.

What listeners say about The Articles of Release

Filled in the holes in the story and chosen a narrator that could at least attempt a Cajun accent to fit the character Eric.

Could you see The Articles of Release being made into a movie or a TV series? Who should the stars be?

Hmmmmm.... Josh Stewart as Eric, he can actually hit that Cajun accent.

Troy Daniels knows what it's like to feel like you are less than, to feel like you are lacking because a part of your body is missing or broken. It's part of the reason he's an adrenaline junkie. He feels this need to prove to everyone, especially himself, that his disability doesn't define him as a man or a person. When he meets Army vet Eric Tremaine, sparks fly, but not the ones that ignite from a mutual attraction. Eric mistakenly paints Troy with wrong brush. Thankfully, Eric isn't a man that can't recognize when he's wrong. Apologies lead to lunch and eventually dinner and a mutual attraction is explored, very slowly at first. But Troy has a problem with sitting still, or refusing any offer to do something he probably shouldn't, which just might drive a wedge between him and Eric that can't be fixed.

Okay, I really, really wanted to like this book. I had several issues though, most notably the narration. Eric Tremaine is obviously Cajun, what with the last name but he's also referred to as the Cajun more than once in the story. The narrator didn't even attempt to give him a Cajun accent. He could have given him a southern accent if he couldn't re-create the appropriate tones or nuances for a Cajun, but no, he was almost monotone and it really affected the story for me. The story itself was choppy and at times, stilted. I did enjoy the exploration of feelings and attitudes in the story though. Eric's anger over his injury and the fact that he wanted to make his life around the army, and being injured while on duty killed that dream. Troy's inability to say no when he's offered chances to fly a plane and do stunts, ride a motorcycle and so on. Losing his legs as a teenager, he's come to terms with that but not with his ADD and he just can't wrap his brain around why someone else wouldn't understand his need to prove something.

I think if you're a fan of the author, slightly angsty adult stories or cowboys, then you'll probably enjoy this book more so than I. But I would have to recommend reading it, the narration was just not that great. Sorry.

Robert Nieman saved this one

If you’ve listened to books by BA Tortuga before, how does this one compare?

I haven't listened to any BA Tortuga before, and I probably won't again.

Robert Nieman is a favorite of mine. He's really the only reason I didn't send this one back.
So, two thumbs up for his narration and nothing at all for the rest. It was just an okay story at best

This was a good story but it didn’t wow me. BA Tortuga wrote a nice, sweet tale but there wasn’t anything truly outstanding about it.

I agree with her statements especially that the men were relatable and realistic.

However, like PizzyGirl, I hated a lot of the dialogue. The constant surfer speak grated on my nerves.

Overall, this was a decent comfort read.

Robert Nieman did a decent job with the narration but I wasn’t overly impressed with it. There wasn’t anything bad about it, but nothing great either.

Loved the story, a little disappointed in narrator

So – first you don’t have to have read book one, but… it was a great book and really helps make this book mean even more. Sage and Adam are the MCs from book one and play an important role in this book. Sage has had two knees replaced and is doing PT with Troy, a double amputee who is both tough and a little crazy for adrenaline.

Eric is a recent ex-soldier, just out of the Army on disability. Eric and Adam were in service together and Eric is blessed that Adam offers him a place to recuperate when he’s out of options.

After a rocky first meet, Eric and Troy end up working out together and making a real connection.

Both men have their hurdles to overcome and Troy especially keeps running into trouble. But together – together they work just fine and with little to no trouble at all.

This is a very sweet book, full of endearments and easy, smooth lovin’.

We get to see a lot of Sage and Adam and that, too, is fun and really, really sweet.

Though there are some tough recoveries in store for these guys, the bulk of this book is pretty angst-free and a very, very nice love story. In my opinion, just the right amount of “sap” for a true sap-lover like myself.

I highly recommend this to: fans of the author, the first book, cowboys, soldiers, uniquely abled peoples and sappy romance.

Robert Nieman is one of my favorite narrators… but I was a bit disappointed with this one. He does a nice job with the emotion and the pacing – and I love his general narrator’s voice. He’s easy to listen to and overall, I like it. What I wanted though, was all the accents. This is a book full of interesting characters who’ve got Texan and other type accents – but Robert doesn’t do those. I still enjoyed listening to it – just a bit less than I think I would if we’d had some other accents. The characters tended to blur together and I had to listen hard to know who was speaking.

Love not having to skip sad parts.

Like the last book, the two fall in love and get together super fast, and then work through issues as a couple. I get really attached to the Idea of two people staying together and I loved how the author doesn't separate them for a while. There are issues, but they work through them, and there aren't full episodes of depressiin where theh stay away.

As for the narration, it was confusing. It was the same in the last book, so I can't know if it was the narrator's fault or if the book is just not audio friendly, but I had trou le knowing who says what, and what's being said vs thought...

All in all, it was a great listen. I got a little teary eyes, but got to smile as well.

This is book two, and I’ve done both one and now two. I would recommend doing book one first. First, it’s brilliant. But more importantly, the characters from one play a major role in this book and to understand some of what is said it’s best to read/listen to one.

Eric and Adam served together,so when Eric is hurt and discharged Adam is Eric only option. Eric family disowned him for being gay a long time ago. Although they do call to remind him how disappointed they are.

Troy is Sage’s PT guy and best friend. Troy also has limitations that at first no one tells Eric about.

When Eric first moves in he’s miserable, he’s hip hurts, he feels useless and and basically mad at the world. Sage and Adam convenes him to start seeing Troy for PT, this has a rocky start but as this friendship develops so does the heat factor for both parties.

The problem is Troy is a daredevil adrenaline junkie, and Eric just wants the new love of his life to be safe. What Troy hasn’t told anyone, the reason why.

I have to admit, I’m a huge B.A fan! And I LOVED audio one. so jumped on audio two. But when I heard that both had physical injuries I was nervous. I’m not big on the whole I’m going to one up you game. But this book wasn’t like that at all.

What we do have is two men falling in love, both trying to heal, physically, emotionally and spiritually. Finding there way in a new life, with the help of family and friends. Knowing that these two are going to have that HEA forever.

These two are so perfect together, loved way we got to learn right along with Eric. Enjoyed revisiting some old friends in Adam and Sage.

Hoping that maybe Noah’s book is next?

The narrator did a perfect job capturing everyone’s accents, from the Cajun to the Texas draw.