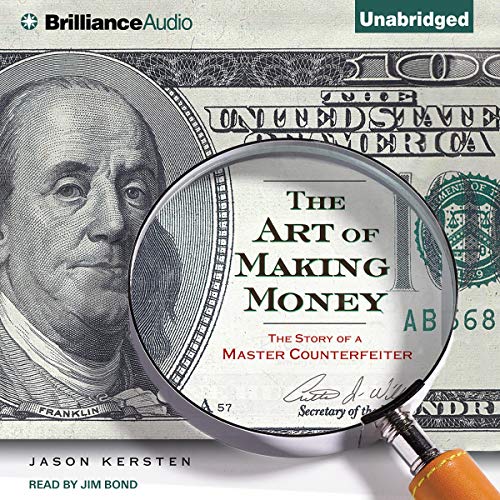 The Art of Making Money

Art Williams spent his boyhood in a comfortable middle-class existence in 1970s Chicago, but his idyll was shattered when, in short order, his father abandoned the family, his bipolar mother lost her wits, and Williams found himself living in one of Chicago's worst housing projects. He took to crime almost immediately, starting out with petty theft before graduating to robbing drug dealers.

Eventually, a man named nicknamed DaVinci taught him the centuries-old art of counterfeiting. After a stint in jail, Williams emerged to discover that the Treasury Department had issued the most secure hundred-dollar bill ever created: the 1996 New Note. Williams spent months trying to defeat various security features before arriving at a bill so perfect that even law enforcement had difficulty distinguishing it from the real thing. Williams went on the print millions in counterfeit bills, selling them to criminal organizations and using them to fund cross-country spending sprees. Still unsatisfied, he went off in search of his long-lost father, setting in motion a chain of betrayals that would be his undoing.

In The Art of Making Money, journalist Jason Kersten details how Williams painstakingly defeated the anti-forging features of the New Note, how Williams and his partner-in-crime wife converted fake bills into legitimate tender at shopping malls all over America, and how they stayed one step ahead of the Secret Service until trusting the wrong person brought them all down.

A compulsively listenable story of how having it all is never enough, The Art of Making Money is a stirring portrait of the rise and inevitable fall of a modern-day criminal mastermind.

What listeners say about The Art of Making Money

This is the third time of listening to this book. it is still a favorite, the writing is great the reading is great. A story of everyday criminality with heart. Go out and get a copy you'll not regret it. A fine work.

I enjoyed the book. I hope a revised edition comes out that shows what Art has done since this book was finished. He has turned things around and is creating beautiful works of art .

Hollywood will probably make this into a movie one day. BTW the narrator is great too.

A fascinating, exciting, and sad account of the life of a forger. I was enthralled the entire way through – it was a great read!

I found this book rather dull and disappointing. I could be wrong, but I found the overall description of the lead character unconvincing and not always credible. Most of the narrative just plods along, dwelling on mostly mundane details of uninteresting low-lifes and their purported crimes. Not worth the time or money, in my opinion.

In my opinion, the Foul Language is lightly spread throughout the book. It's what you would expect street kids, criminals, and gangsters to talk like. The story is a interesting journey of this man's life. He delves into how he made the money, what materials & equipment he used, etc.. And we get into the consequences of doing this crime. Secret service, jail time, etc..

Overall, not too bad, and the foul language is not too often. Just lightly spread through the book. It's a good 9 hours of story. It moves along at a good pace.

Very interesting book. Nicely narrated. Nice story development. Sort of feel for the main character who is a real person. However, you also realize that he is a crook and not a very nice person and deserves everything good or bad that happens to him.
Would recommend listening to "Catch me if you can" or watching that movie first - BEFORE listening to this book. It will just enhance this story more.

The worst book on the planet

The real title of this book shoud be "The art of ripping people off by selling them books that suck" The only reason this book got one star is because the program will not let me rate it any lower. This book is great if you want a personal story on the subjects young life before counterfitting. All the author talks about is how the thief's poor upbringing caused him to start counterfiting, then he talks about it some more. Then when you think he is getting to a chapter about counterfiting he rips on the kids dad some more. BUYER BEWARE.

Interesting book, just too much swearing for me

This would have been a great read for me but I just could not get beyond the unnecessary swearing. It does not add to the book at all.

I really regret giving this book two stars. I was hooked from the beginning, but the amount of four letter words began to grate on my ears. This is definitely not something you want to listen to with kids around or with others. If foul language offends you, skip this one...