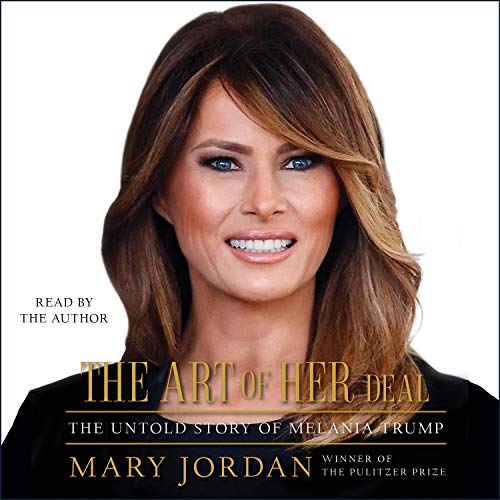 The Art of Her Deal

In this “scrupulously reported biography” (NPR) Jordan documents how Melania Trump had discussing being First Lady nearly two decades before she landed in the White House and how she encouraged her husband to enter the race for president.

Based on interviews with more than one hundred people in five countries, The Art of Her Deal: The Untold Story of Melania Trump is “an extraordinary work” (Salon) that draws an unprecedented portrait of the first lady. We see that behind the scenes Melania Trump is not only part of President Trump’s inner circle, but for some key decisions she has been his single most influential advisor.

Jordan interviewed key people in Melania's close circle who speak publicly for the first time and uncovered never-before-seen photos and tapes of the tall woman with “tiger eyes,” as a judge in an early modeling contest said. The Art of Her Deal shows Melania’s ascent from a modest life, tracing her journey from childhood under a communist dictator to her complicated relationship with Donald Trump. The picture that emerges is “that the first lady is not a pawn but a player...and a woman able to get what she wants from one of the most powerful and transparently vain men in the world” (NPR).

And while it is her husband who became famous for the phrase “the art of the deal,” this is the story of the art of her deal.

What listeners say about The Art of Her Deal

After listening to Stephanie's book. There waa zero new in this book
Very disappointed with it
Well narrated but that's it

As someone who has followed the Trump administration since that fateful day in November 2016 where DJT surprisingly won the election I have read many books of the campaign and his family members. Like many I used to see Malania as a bullied wife, someone who was pretty on the arm but not worthy of her US Einstein visa in any way. I felt sorry for her, and read all the articles on the popular theme of “free Melania” .
This book shows her as someone very much in control of her life,her relationship, her worth and her roles of both mother and First Lady.
She was born and raised in Slovenia, and has the typical of no nonsense Eastern Europe, she dreamt of moving away abroad to a better life.

It became obvious from the book that she does what she pleases and does not respond well to being told what to do, even by her husband. She did not intend to play the traditional First Lady and only moved to DC when her son had finished school in New York. When you are married to a man who doesn’t respect the sanctity of marriage, who is
also the President of the United States and values his public perception, you can see how she has mastered the art of manipulation.

It appears to have a deep affection for her husband, but whether she’ll remain Mr Trump after they leave the White House I have no idea!

Pure propaganda by a fangirl

Made it through several chapters expecting an unbiased examination of the life of Melania Trump, but it is clear the author has ignored anything but support for her adoration.

She's presented as an independent genius with no actual evidence other than her current husband not yelling at her.

If you're a member of the the MAGA-cult, this is for you. if you have a triple-digit IQ, pass on by.

Wanted to love this book

I'm about halfway through the book and I'm bored to tears. While I am not a fan of her husband, I love Melania and was looking for something more than what this book offered. Maybe it's the lack of sources willing to go in the record with anything other than surface level information, but this just felt like a constant ego stroke to a woman who clearly does not want or need it. Needed this to go deeper and it fell flat. Also wish the author would have found someone else to narrate. Her narration was one of the hardest things to get through. I have to admit this is one of the first audible books I will not be finishing.

disappointed but not surprised

Well, it was not a professional depiction of a first lady. it was more of an insight into 2 people, both driven to succeed in different ways and their co-dependence on one another to do it. The only thing I got out of it was the bartering of how Trump decided to marry this woman based on a calculation of her image for his political goals. She in turn wanted what he represented and found her way to it through the key to his heart..blind loyalty. The author stated she loved him. Please. She was as driven to use him as he her. This is no love story. it's a merger, with mutual goals of superficiality and glamour, and the political power Trump decided he was destined for.

I think Trump supporters will start flooding the reviews with negative ones just to try to bolster Donald Trump.

I'll edit this review when I've finished the book.

New review after finishing it:
It's largely flattering but it does point out that she doesn't speak French, German, or Italian, all of which she has claimed she is fluent in speaking. It also proves she left university in her first year to model while she claimed to have graduated with a bachelor's degree. Otherwise, quite complementary but the author is limited in finding out any of Melania's true thoughts. The author apparently researched very thoroughly but was allowed only one interview with the book's subject so she had to work within that confine.

Pre- Medicate with Xanax Prior

Irrespective of Republican or Democrat - The USA deserves to be handled with Dignity, Class, Grace, and Decorum on the World Stage. We are currently the laughing stock of the entire globe. ALL Americans deserve better! “God Bless America”!(Which was written by an immigrant)

a waste of time.

not worth the credit I spent on it. information that could have been gained from any tabloid rag dont waste your time.

I learned nothing of substance about a vapid woman who has nothing to offer humanity.

I don’t know why I thought it would be a good idea to listen to this book? I have been burnt out on Donald Trump and consequently his wife for a long time. In parts of this book, I felt the author was glamorizing Trump and Melania through the public’s shallow eyes.The implication seemed to be, “Oh, we should all be so impressed with this story.” It was very tabloid, superficial and shallow. It was sickening to listen to.

Later on, I got the impression the author was showing possibilities that Melania was dishonest and no better than Trump. When she was trying to paint the fairy tail fantasy picture, it felt insincere. The entire book reeked of insincerity. The truth is that if Melania Trump did not have an ounce of decency in her veins, or she would have stayed away from the Donald. I came away with the conclusion that Melania was using Donald as much as he was using her. I think very little of these two people and I won’t waste my time reading about them again. This book was written to please the masses, who really don’t care about values and morals. Vacuous book!!

A complicated and intriguing woman

I listened this in one sitting. she is not a puppet or a gold digger. She is an intelligent and fascinating woman.

But I don’t think authors should read their own Books. Let the professionals enhance the material.