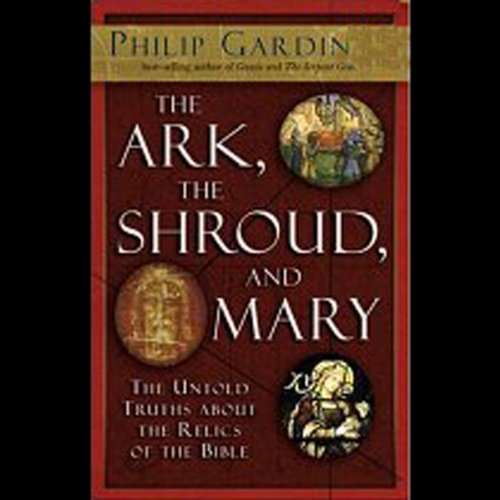 Why do the Ark of the Covenant, Mary's reliquary box, and Jesus' coffer all have the same imagery? Was the Ark the container of the Covenant, the Ten Commandments, or the Chalice? Does the image on the Shroud of Turin contain a bioelectric field?

These questions and others are explored in The Ark, The Shroud, and Mary. In this unique and thought-provoking work, Philip Gardiner proves that the Ark of the Covenant, the Shroud of Turin, and Mary are united in ways never before imagined.

Traveling across the world, from Rome to India, Portugal to Egypt, Gardiner uncovers the trail of the Ark and finds that it does not lead to Ethiopia, as many believe, but instead in a direction that nobody could have imagined.

The trail of the Ark takes Gardiner on a hunt into the very heart of an ancient secret society with clandestine meetings in far off lands. Uniting the myth, tradition, and language of the Ark with the Shroud of Turin, Gardiner then goes on to re-date it, reveal how it was made, and identify whose image it actually recreates.

Through his new-found contacts in the world of secret societies, Gardiner then shows how this incredible secret was protected by a dual brotherhood throughout time and was the secret source of the enlightenment spoken of by numerous orders, from the Sufis to the Knights Templar.

The Ark, The Shroud, and Mary outshines The Da Vinci Code for the simple reason that it is the factual story of one man's fight to uncover the truth.

If you are looking for an album of dodgy music with a few words of dodgy theorising (sorry if that makes it sound vaguely intellectual - this "book" is completely unsullied by intellect!), then look no further.

After many years of 'Audible' membership, I can safely say this book is the worst I have listened to. In defense of the author it should be mentioned that this unabridged drivel is also the shortest I have come across.

I can't give a zero so it gets one star

If the fact that this is a badly written, appaulling pile of drivel isn't enough, you can lose yourself in the likes of Marilyn Mason style backing tracks ever 30 seconds.
Not sure what you were trying to do here but if it was irritate the living soul out of me you definitely succeeded.
Its also taken me about a year to get round to reviewing this, it was the first time I could be bothered.

The most annoying thing about this "book" is that he's reading it to you with loud, mediocre heavy metal blaring in the background, so you have to strain to undertand him sometimes. Also, he stops talking for up to 5 minutes at a time so that you can enjoy said mediocre music without the annoyance of his prose. If I wanted to listen to music, I would pop a CD into my car's player!

This is more of a pamphlet than a book, as I suspect that once you take out all the irritating music, it's probable about 30 minutes of actual reading. The book's description on this site is much more informative than the book itself!

How anyone would compare this to the davinci code is completely beyond me, since the davinci code is an actual book, as opposed to this meager offering. He's mostly rambling, and while there are a few interesting tidbits buried in there, most can't be heard over the din of terrible music.

36 of 36 people found this review helpful

This is the worst book on Audible, EVER!
If ever Audible.com ever gave a Mulligan, this would be it. Pure, absolute junk. annoying junk. Music loud and unnecessary, and BAD,BAD,BAD!!!!!!
If there was away to give a negative star this would be a negative 5 star.
DO NOT GET THIS BOOK.

16 of 16 people found this review helpful

I have read Gardiner's books and will stick to the actual books! Like other review stated the music is AWFUL and the book puts forth an hypothesis which is hard to follow and believe and I am a GNOSTIC! Don't waste your time or money dowloading this book!

Hardly worth a whole book, barely enough material for a chapter. Loud music throughout, wasting space and combatting with an extremely heavy Brittish accent. Get in book if interested.

I feel so stupid

I should have trusted on the reviews about this one... I've decided to give it a chance... It is horrible.

Should Get Negative Stars

I feel like someone owes me money for this even being available for download.I won't spend much time on this: you can barely here the narrator over the music of some band that either the author or his friends are in. The music sucks. The purely conjecture 'story' sucks. The narrator sucks. In closing - this audiobook and anything associated with it, suck.

i have never heard an audio book with less consistency in both sound levels and quality. every chapter has loud music playing behind the narrator and almost drowns out thier voice completely.I was extremely interested in this concept and the authors work in general but after trying to listen to this rendition, I will not be buying another of his audiobooks... Its just a headace inducing array of sound that is not what I want in an audiobook.