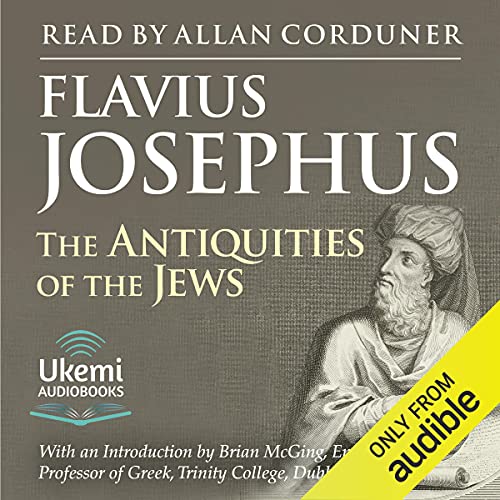 The Antiquities of the Jews

By: Flavius Josephus
Narrated by: Allan Corduner
Try for £0.00

Among the many important historical documents from the Classical world of Greece and Rome The Antiquities of the Jews by Flavius Josephus is one of the most distinctive and characterful. Josephus (37-c100 CE) set out with the clear purpose of telling the history of the Jews from the creation in Genesis to the Jewish revolt against the Romans in 66 CE. Born in Jerusalem as Yosef ben Matityahu, he rose to become a leading participant in the First Jewish Revolt (66-73 CE).

Surviving the aftermath, Josephus was initially enslaved and became an interpreter to Vespasian, but he increasingly accepted Roman ways and ultimately adopted Roman citizenship. It was this combination of a broad education, first-hand experience in conflict and politics and a genuine admiration for Roman life (without undermining his profound respect for his Jewish heritage) that made him an ideal figure to undertake his various chronicles.

The most widely read remains The Jewish War written around 75 CE, but his magnum opus proved to be the most ambitious project, The Antiquities of the Jews. A considerable enterprise in size as well as scope, the 20 books of The Antiquities (written in Greek) falls more or less into two sections. The first 10 books present Jewish history based on the Hebrew bible starting with the creation of Adam and Eve. The remaining books soon leave the biblical tradition behind, as Josephus draws on the Greco-Roman historical sources available to him as a scholar alive and active during the times of Vespasian Titus and Domitian.

Though drawing on many other historians, the importance of The Antiquities is the considerable amount of information it contains, which has not otherwise survived in such detail. These include dissension within the Jewish community when encountering Greek and other civilisations and, of course, the immense impact of Rome. Josephus mentions events concerning the careers of major Roman figures, including Pompey, Crassus, Mark Antony, Julius Caesar, Augustus and others of which we would not otherwise know. And the account of Herod’s reign in Judea, which spans four books in Josephus’s narrative, provides detail unique in the ancient annals. Famously, The Antiquities also contains two references to Jesus and one to John the Baptist, though this is questioned by some historians who point out that all the extant sources for The Antiquities date from Christian times. Nevertheless the importance commanded by The Antiquities of the Jews in the historical record remains undisputed. The translation used here by William Whiston (1667-1752), appearing in 1737, is also a classic and remains eminently enjoyable for a modern audience. It is authoritatively read by Allan Corduner.

What listeners say about The Antiquities of the Jews

Despite the mispronunciations, the narrator Allan Corduner does a phenomenal job reading this extremely long but extremely important book. While I like Charlton Griffin, Corduner is more lively which makes listening to such a lengthy text so much more tolerable/engaging/enjoyable.

Oh and Josephus was good, too.

I was happy to finally see someone tackle this masterpiece of history and very happy the narrator is good for the most part. Get this title now and the Kindle from Delphi works with this translation so great for students in school. There's no Whispersync but because of the structure and numbering you will find your way back to the right spot quickly. Hats off to Allan and the audio people. If you do more Greco Roman history I'll buy especially if it is a translation with a cheap kindle. I highly recommend this audio book for anyone who loves history and the Bible. Josephus is my favorite historian. Make bookmarks because the chapters aren't named on Kindle fire 10. The chapter names for this title are almost always long so can't fix this one shortcoming. I am almost done but I wanted to give you a review so people know it turned out well.