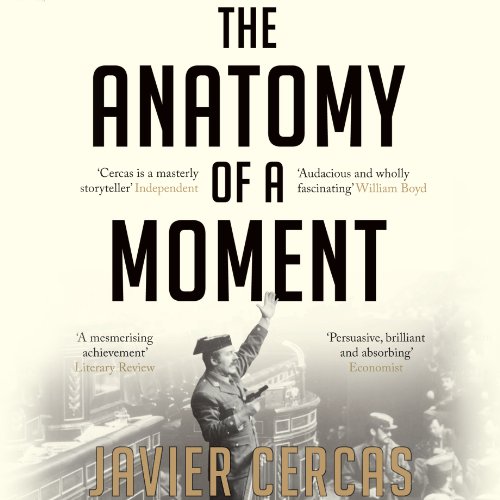 The Anatomy of a Moment

By: Javier Cercas
Narrated by: Tim Pabon
Try for £0.00

In February 1981, just as Spain was finally leaving Franco's dictatorship and during the first democratic vote in parliament for a new prime minister - Colonel Tejero and a band of right-wing soldiers burst into the Spanish parliament and began firing shots. Only three members of Congress defied the incursion and did not dive for cover: Adolfo Suarez, the then-outgoing prime minister, who had steered the country away from the Franco era; Guttierez Mellado, a conservative general who had loyally served democracy; and Santiago Carillo, the head of the Communist Party, which had just been legalized.

In The Anatomy of a Moment, Cercas examines a key moment in Spanish history, just as he did so successfully in his Spanish Civil War novel, Soldiers of Salamis. This is the only coup ever to have been caught on film as it was happening, which, as Cercas says, "guaranteed both its reality and its unreality". Every February a few seconds of the video are shown again and Spaniards congratulate themselves for standing up for democracy, but Cercas says that things were very quiet that afternoon and evening while all over Spain people stayed inside waiting for the coup to be defeated ...or to triumph.

"Cercas writes brilliantly, in simple, direct language and beautifully, uncontrivedly modulated sentences. His prose is a pleasure - easy without dumbing down." (Felipe Fernandez-Armesto)

What listeners say about The Anatomy of a Moment

History as a novel

Puritans may disagree with the liberties Javier Cercas, a novelist, takes with these real events and the way he gets into the minds of these real characters. It is not pure history. But I couldn’t care less. I was with the author the whole way engrossed in his tale.

A technically great book, but sags in areas

This story of this book is outstanding. To take 17 hours of history and give every moment meaning is really brilliant. However, there were lots of moments where this book DRAGGED. It felt like hard work and i felt disconnected from it. I consider myself pretty knowledgeable, but I felt really out of my depth in some areas, and past the point of caring with others. Too much details in some cases.

That being said, it did always win me back round, particularly the final chapter.

Tim pabon is a great narrator and well cast for this audiobook. He captured the nuance of cercas through translation. However there seems to be lots of weird pauses of the narration, like mid sentence. Also occasion background noises. This really takes you out of the moment.

Overall, a good book, but one I struggled to finish.

Failed coup in another country can be fascinating

Warning: stick with this for at least an hour. It is slow at the beginning. But once Cercas gets rolling you are enthralled with his character studies and his explorations of heroism, statesmanship, politics, and democracy.

The framework for this analysis is the failed coup of February 23, 1981 in Spain. The country is just settling, uneasily, into democracy after forty years of Franco. The economy is failing, ETA (Basque terrorists) are bombing regularly, and those with power: the military, the church, the wealthy and priveleged under Franco, are unhappy with Adolfo Suarez, who they put in place to retain the core of Francoism while putting on the trappings of a democracy for public consumption. Surprise. Suarez took his assignment seriously and rapidly drove through a full democratic architecture; he even legalized the Communist party.

So several generals decide, ‘for the good of the country’, to overthrow Suarez. The military bursts into the Cortes (the legislative chambers) and starts shooting. As everyone else drops to the ground, Suarez and two of his unlikely collaborators in creating a democracy stay upright. Cercas asks why they stayed standing and what it meant. The book is a wonderful set of character studies of these men and the plotters, set against Spain’s recent history.

The writing is very skilled. Cercas uses rhetorical devices such as repetition of phrases (ironic or otherwise), symmetry, etc. to bring art to history. The rhetoric brings a rhythm and sense of music to the story, carrying the reader along.

Very highly recommended. Also, the narrator speaks both English and Spanish so all the names and places are pronounced correctly (I presume--sounds right to me).