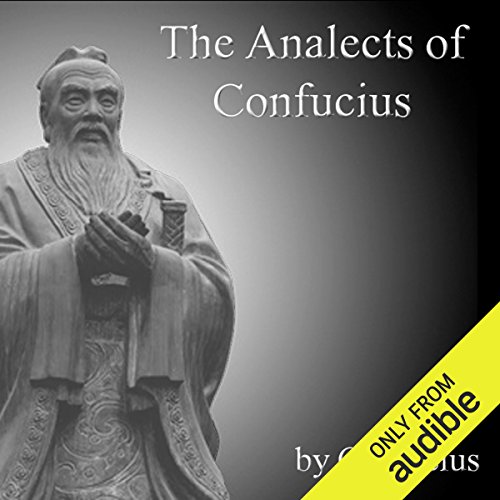 The Analects of Confucius

By: Confucius
Narrated by: Jim Roberts
Try for £0.00

Confucius was a Chinese philosopher who lived from 551 BC – 479 BC. Although he is usually listed as the author of The Analects ( wise sayings ), it was actually a group of his followers, years after his death, who wrote down his words and descriptions of his daily life. The philosophy of Confucius emphasized morality, "the proprieties" - correctness of social relationships - as well as justice and sincerity. A major goal of his conversations was to get his disciples to think deeply for themselves by relentless study of the world. Confucius' values gained prominence in China over all other doctrines and, in time, his thoughts were developed into a system of philosophy known as "Confucianism." It is difficult for people outside China to realize just how great an influence Confucius has had on Chinese thought. To his day, even in Communist China, there are temples to Confucius in almost every city and every year spectacular memorial ceremonies are held honoring Confucius and his philosophy.

What listeners say about The Analects of Confucius

Wise words of a true sage.

As simple as this book may seem, once you understand its meaning you'll be exposed to pure wisdom that's effective today as it was in ancient times. Humanity must remember this kind of wisdom, even more so nowadays where people constantly forget themselves and allow their psyches to be lowered by denigrating and unfruitful material. People tend to think that forgetting all these teachings means to "evolve," but instead they devolve through technology and the lack of use of their recalcitrant minds.
Wise is he who thrives to understand and tunes his nature to the world and not to oneself.

Mr. Jim Roberts delivers an exceptional and soothing narration that elevates the content of this book to an utmost form.

I was very disappointed in the quality of the narration. To me, Roberts' performance detracted from and muddled the meaning of the Analects.

This edition doesn't change my mind

Don't ask me for justice. I've always regarded Confucius with more doubt than praise. If you never heard about him before, this audio version may be all you need at the low price. Don't expect more than that. I do not appreciate narrators of 'old' books who try to sound haughty for the sake of it. This is one such book.
Anyway, without sounding or feigning imperious one might lapse and fall asleep. If you're an admirer, Confucius doesn't look good here. Translation is clumsy. It gives a feeling C isn't a sage but someone versed in repartees. If he was more than Socrates, he would need more than Platos. There are hidden pearls but here they can't justify him as a philosopher. Inconsistencies abound. How can one follow his 'teachings' if most need clarification?
Maybe English simply cannot serve C. He could be more succinct or interesting in Chinese with fewer words and more rounded interpretations. The translation is forced to pick one or the other. Up to this moment, and on to the future, I have been and will be wondering how so many academics and students can devote their time elaborating on C. He is a(n) historical figure you chance to find then hurry on.

The Example of Greatness

This was a great short read. I highly recommend it but only to those already familiar with Confucius.

The tone and pacing of the reader were confusing and completely inappropriate. The reader seemed uncomfortable and unfamiliar with the text, as if reading each sentence for the very first time. The fit was like reading Shakespeare in the tone of a sportscaster. Reader also seems completely unfamiliar with pronunciation of Chinese names. I'm sure the reader is fantastic at interpreting other topics, but a reader more familiar with the subject matter would greatly improve the performance of this reading.

Honestly it was a challenge to finish, much of the book seems pointless and droning. The vocabulary is extremely high level and I had to look up tons of words.

BUT, all the good & applicable life advice pretty much starts at chapter 17 and continues till the end

A philosophy for conformity

A series of short statements quoting others. Sums up as: know your place, do your duty, respect your elders, learn widely, don't be selfish. It begs for conformity. Basically that over and over. Meh, not my cup of tea; I much prefer the teachings of these Tao Te Ching on letting things be as they are rather than following roles.

Hard to Discern a Moral Code From This...

What I liked least was the assumption that one was already aware of the "Rules of Propriety." have these been written down anywhere?

I seem to have gotten hold of an entirely different translation of this work than my old mentor C.S. Lewis did. I not only found them dull and uninteresting, but many of the things referenced in the introduction did not even seem to appear in the book.

Did Jim Roberts do a good job differentiating all the characters? How?

There were also several points at which I felt that necessary terms had been left untranslated altogether.

Do you think The Analects of Confucius needs a follow-up book? Why or why not?

If it were possible to find a specific book on the Rules of Propriety, then this book might be brought into a deeper and more sensitive context.