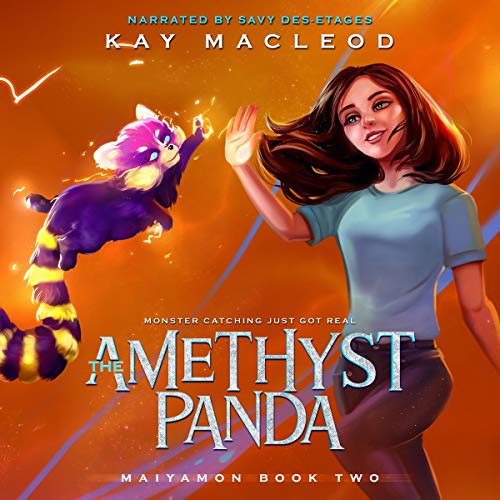 Monsters do exist. The humans working to destroy them are way more dangerous.

All Sam wants is to grieve alone with the surviving members of her team, but she has information people will kill for. Now she’s stuck between a delusional girl obsessed with an imaginary monster, an overbearing descendent of the game’s creator, and a violent hate group determined to end Maiyamon for good.

The last thing she wants is to expose her team again. But Sam doesn’t have much choice when she uncovers a plot to remove all monsters from the world. She’s going to need allies if she wants to protect her Gems, even if she can’t bring herself to trust them.

What listeners say about The Amethyst Panda

If you've listened to book 1 you should have some idea what to expect but man is it so much more, Book 2 starts off not long after where book 1 ended and follows Sam further into her journey. With more lore and world building and so much more action, this is an excellent follow-up to book 1 and I can't wait for the next book

I found this story the most Original in Years!!

The world and culture of this Audible book is so Original compared to the hundreds of books I have listened/ read in the last couple of years.
Though this is a Young Adult story it was just so good that even a 65 yr old enjoyed the Heck out of it. Looking forward to the next book in this Series "The White Wyvern" I believe the title to be.

Perfect continuation of world building and the exciting journey Sam and her team finds themselves on. Glad she has been learning to trust others since her past adventure and looking forward to follow her on the path ahead.

I am so happy I got the chance to listen to The Amethyst Panda. I really enjoyed my first read of this book and re-reading it was possible even more enjoyable. Not only is the narrated great, I also liked the fresh look I had now that I already read this book. Just like the first time around I really enjoyed the Maiyamom battles, the twists and turns the story took and most of all seeing how far Sam comes in this book. She really struggles at the start, but that was easier to handle now that I knew what was coming. And seeing how she develops and grows throughout this book is amazing to see. The narrator does an awesome job with this book. I really liked her voices for the different characters, as well as Rica, her Rica voice is so fun! Listening to this book adds another dimension and I am really happy I got to listen to this book as well. Can't wait for the next book!

I adored the first book in the series, and honestly would have been happy with more of the same. MacLeod, however, didn't just keep the sort of happy-go-lucky feel of the first book--she expanded the world of Maiyamon and explored more serious issues using the template she'd created in the first book to full effect.

the characters are as delightful as the first book, and the Maiyamon battles are intense and hectic. I enjoyed some of the more enclosed settings here, while also missing at times the broad fun of the first novel. This feels like a middle novel that brings on the challenges and intrigue without losing sight of what made the first novel so great. I highly recommend it.

Sam has been through a very trying event since she graduated school and is working through her grief. She is struggling to know who to trust. Of course, this is exactly when she gets drug into a new adventure.

This is a very good book! It covers a lot of the grieving and healing process that a person has to go through. There are some exciting points that are made. Sam has some angst moments, but then you remember that she is pretty young.

This is a great series so far, and I am looking forward to the next book!

this book is a good sequel to The first in the series. Ms Macleod spends a good and exciting tale. you should give this series a chance.

I would still watch pokemon if the stories were this good! I really enjoy the world created in this series! definitely an emotional ride!

In some ways this book doesn't feel like a sequel but rather an ending to book one, instead of focusing on the "I'm gunna be the very best" mentality, it focuses on relationships and reality, mental health and friendship, death and closure. it was darker and deeper but in the darkness we find the light and bring forth answers... but leave just enough questions to make you want to get the third installment. I for one am looking forward to it.

This second book of the world of Maiyamon was darker than the first book as this book dealt with betrayal, loss, and death. There is still plenty of action, adventure, and battles with moments of humor and snarky comments that are reminiscent of the first book, but there is a growth of maturity in the main character, Sam Wentworth that I really liked to see. I enjoyed the second book and recommend it for those who like this genre. Savy Des-Etages' narration continues to be great, providing voices that help to bring the characters to life. I was given a free copy of the audiobook and I have voluntarily left this review.