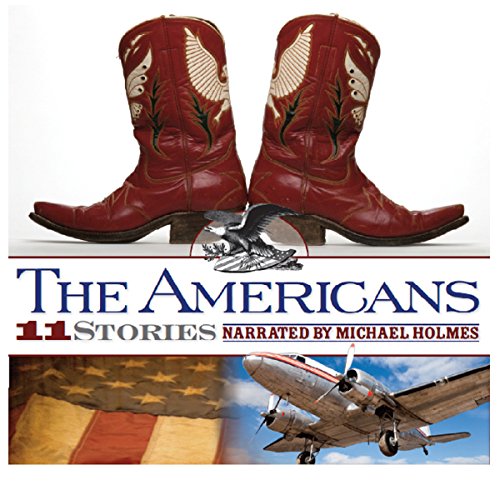 The Americans: 11 True Stories of Challenge and Wonder

Here are tales of adventurers, gifted and determined, who enriched our lives as they lived theirs with spirit and grit. Francis Scott Key, who turned glorious patriot as he saw Fort McHenry’s defenders bombed but not bowed. Amelia Earhart, who became a famous pilot before she could fly. Slaves William and Ellen Craft, who ran a thousand miles for freedom using audacity and ingenious disguise. Butch Cassidy and Sundance, Barnum, Twain, Dix. The first female doctor, a Civil War spy, the sharpshooting Quaker girl of Buffalo Bill’s Wild West show, and the man who banished pain. Meet them all - discover the TRUE stories about the people you only thought you knew.

You can find the print versions of these and many more stories from OldNewsPublishing.com. The Americans is also in Kindle form on Amazon.com.

What listeners say about The Americans: 11 True Stories of Challenge and Wonder

Most everybody loves a good story. For me in particular, not so much. Unless... it is a good story about real events which happened to real people. Then it becomes both compelling and full of intrigue.

Imagining what it must have been like to actually be there in a different time and place, I was struck by how vastly different society was when these characters walked American soil, and yet how human nature hasn't changed at all.

From the inspirational life of Amelia Earhart, to the scandalous escapades of Butch Cassidy and the Sundance Kid, to the amazing stories of obscure people I have never heard of, I was drawn in to each one's world and amazed by their courage, audacity, and vision.

This is just a sampling of countless people of similar talent and ambition who have made America a great nation, The narrator delivers the stories in a smooth manner that is easy to listen to, and provides just enough background music and sound effects to bring the stories to life.

I am already listening to it a second time... and no, I am not a history buff.

Yes. Great for passing the time while traveling.

I enjoyed the stories. Although I thought I knew about these people, I learned something new in each story. The narrator was excellent; not overdone so as to be tiring, but with just the right amount of intensity to add to the story.

I'm a documentary film maker and discovered this book doing research on a possible future project. I found the stories engaging and well told. The production is top notch with music and sound effects used to help "paint" a visual picture of the stories as they unfold. I think the narrator is spot on, not too sing-songy or overly dramatic, and he speaks with a warmth and feeling for the subject in a clear strong tone.

The American Character Brought to Life

What made the experience of listening to The Americans the most enjoyable?

An entertaining and informative dose of the American spirit. Something that is desperately needed today. Slip it into your kids' iPod and they just may discover what this country's all about.

Storytelling at Its Best!

Sit back and enjoy old-fashioned storytelling at its best! “The Americans” is a collection of 11 true tales that celebrate the diversity and ingenuity of those heroes who paved the way before us. The narrator does an excellent job of creating the perfect tone and mood for each story. The musical interludes are well placed and appropriate to the particular historical account. A truly enjoyable listening experience!

If you could sum up The Americans: 11 True Stories of Challenge and Wonder in three words, what would they be?

Dorothea Dix could have frittered away her life and fortune on herself, but chose instead to use both resources to help the unlovely, unwanted people of society - the mentally ill. Her long life is a testament to selfless service - very inspiring!

Hard to choose one favorite scene out of the 11 lives this book describes, because each story contains an inspiring hero.

The narration flows nicely with the musical backgrounds - helps to enhance the stories.

Where does The Americans: 11 True Stories of Challenge and Wonder rank among all the audiobooks you’ve listened to so far?

What other book might you compare The Americans: 11 True Stories of Challenge and Wonder to and why?

Great Expectations by Charles Dickens
Your great expectations are fulfilled in the Americans: 11 True Stories of Challenge and Wonder.

Michael Holmes's voice is easy to listen to and the sound effects and music enhance the listening experience.

All the stories moved me!

This audio book should be in every school library!!!! Kids of all ages will love these stories.

Would you listen to The Americans: 11 True Stories of Challenge and Wonder again? Why?

Yes. The whole package is excellent and keeps my interest

Emilia Earhart because she has guts

What does Michael Holmes bring to the story that you wouldn’t experience if you just read the book?

Michael loves what he does. He brings warmth and the music/sound effects keep my interest. It is a completely positive experience.

The world according to Michael Holmes

Highly recommended for all audiences

If you could sum up The Americans: 11 True Stories of Challenge and Wonder in three words, what would they be?

What does Michael Holmes bring to the story that you wouldn’t experience if you just read the book?

Michael's rich voice and warm tone engage the listener and bring the stories to life with just the right touch.

I was fascinated to learn about these characters from American history - some familiar, some not. The stories are just long enough to give you a good taste for the character, leaving you want to learn more.

These stories a appropriate and recommended for all audiences.

Fascinating Stories That Happen To Be True

These are wonderful stories of Americans that I enjoyed hearing and learning more about. I know the story of William and Ellen Craft very well because they were my ancestors but, despite my familiarity, I enjoyed hearing it as if it were my first time encountering their tale. I was also impressed by how thoroughly the breadth of their story was conveyed in a compact amount of time. The other stories with which I was less familiar were similarly engaging and I enjoyed hearing them, too. Mike Holmes' narration provides a strong voice for covering a range of stories from various time periods. Overall the audio book was well produced, including background music, and it moved at a nice pace without bogging down which made it a pleasure to listen to.