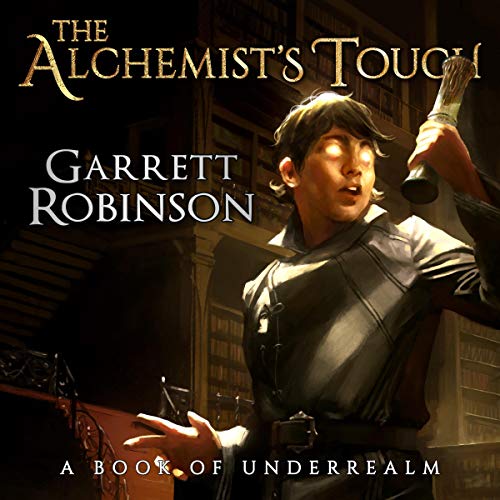 The Alchemist's Touch: A Book of Underrealm

The Alchemist's Touch: A Book of Underrealm

To save his kingdom, Ebon may have to betray his father. He's sort of fine with that.

A new series by Garrett Robinson.

All his life, Ebon has been denied the opportunity to learn magic. Though he was born an alchemist, his father would never let him attend the Academy for Wizards and master his powers.

But in his 16th year, everything changes when his aunt intervenes and enrolls him in the Academy. After years of living under the thumb of his cruel father, he finally has a chance to make friends of his own, as well as experiencing all the mystery and wonder of the High King’s Seat, the greatest city in the history of the nine kingdoms.

But with his new freedoms come new troubles as well. Ebon has always been able to ignore his family’s evil reputation, but no longer. Now he finds himself being pulled into dark schemes he cannot understand, and everything seems to be building to a drastic confrontation that may shake the foundations of Underrealm.

As darkness gathers and more and powerful players enter a deadly game, Ebon faces an impossible choice: remain loyal to a family that has always seen him as a nuisance, or turn against them to preserve the law and order of his nation.

And the doom that weighs on his decision is greater than he can begin to understand.

Buy it now to join tens of thousands of listeners on an epic adventure!

Pardon the pun, but I don't know that there is a better term to describe the Alchemist's Touch. Like all of the books of Underrealm, Touch is exquisite example of representation done right. We have PoC, sex workers, queer characters and more, but at no point does it feel forced. Characters' identities are addressed when relevant to the story, or when it naturally comes up in conversation, which is always one of the best ways to do it. For those looking for diverse fantasy, you will not find a better example than the books of Underrealm, and believe me, I've looked.

While I am a huge fan of the Nightblade Epic itself, I still find myself drawn to the Academy Journals more, perhaps due to the constant presence of Harry Potter in my formative years. There is something about the concept of a school for wizards that I cannot resist, and the Academy Journals don't disappoint. It intrinsically feels different than Harry Potter, far more than a reskin, or a knock-off. There is no Dark Lord, no prophecy, not even a caustic potions professor. Instead you have Ebon, the less-than-favored son of a merchant family feared across the nine lands. As one character in Garrett's Nightblade Epic says, "most [people] would slit their own throats before crossing the Draydens," and Ebon must bear the weight of his family name while trying to make his way in the world.

As always, Garrett's performance is nothing short of astounding. The variety of accents he takes on within Alchemist's Touch are far broader than in any other audiobook yet, and I continue to find myself amazed at what he can do. This story is brought to life not only by the depth of the writing, but also because they are portrayed by their creator, the one who knows them best.

mayhaps they should have bean its own world