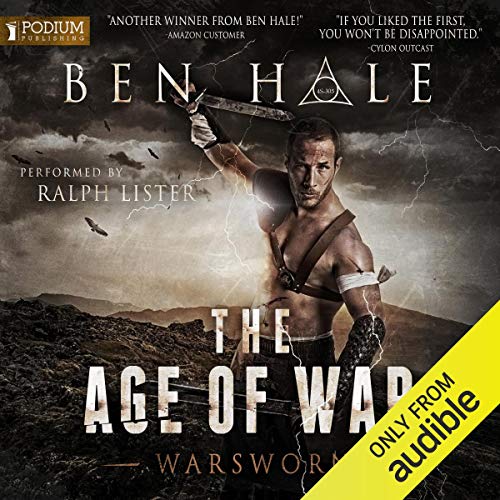 The Age of War

Relentless in their pursuit of perfection, the rock trolls have waged war for millennia. Legendary warriors, vast armies, and even dragons have fallen before their might. But now their enemy comes from within. Rising to the throne by right, King Sybrik seeks conflict even as his people dwindle and perish. His thirst for blood will see no end.

Unless Tryton can stop him.

Endowed with strength, gifted in battle, it is his honor that sets him apart and leaves an indelible mark on friend and foe alike. Now it will require all his skill to end the age of war - before Sybrik incites a conflict that cannot be won. But Sybrik has his own plan and hunts a weapon lost by time. If he finds it, he will become powerful beyond measure.

And all that lives will be his prey.

What listeners say about The Age of War

another great story from Ben Hale

Extremely annoying slightly unnaturally long pause between each sentence but too invested to give up.

Ben Hale continues is great writing , not had a bad book from Ben Hale yet

Another brilliant book from Ben Hale.
Ralph Lister's narration is becoming easier on the ear with each word.

this book is as good as the first. really enjoyed it. looking forward to listening to the next book

Ben Hale continues his series on rock trolls. It is very interesting and I recommend it.

Loved this one too!!

While I did prefer the first book to this one, they are high action and unique. A little twist in the middle that I'm not sure I care for. We will see! But, overall these are fantastic books.

When prequels are done right...

...they are awesome. This prequel series is going very well. Characters that I wanted to know more about are being fleshed out in great detail. So many great stories left to tell. I’m very happy with what I’ve been reading about Luminea.

This is a GREAT trilogy so far though I have to admit the first book was so far the BEST... the second was a bit of a bore but I’m starting the third...

Stop after book one!!!

This book was painfully slow and predictable. I had to listen at a faster speed to finish it.
Don't know how book one was so good and this one just failed completely.