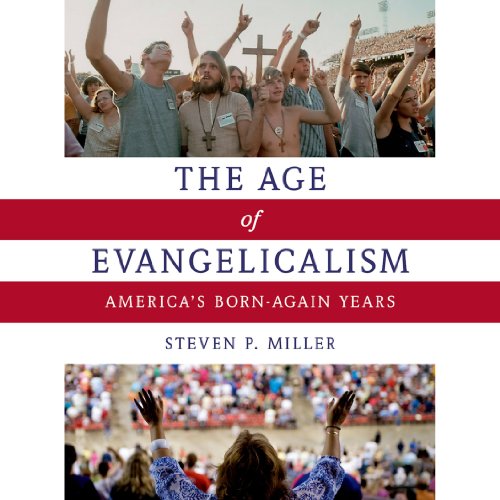 The Age of Evangelicalism

The Age of Evangelicalism

At the start of the 21st century, America was awash in a sea of evangelical talk. The Purpose Driven Life. Joel Osteen. The Left Behind novels. George W. Bush. Evangelicalism had become so powerful and pervasive that political scientist Alan Wolfe wrote of "a sense in which we are all evangelicals now."

Steven P. Miller offers a dramatically different perspective: The Bush years, he argues, did not mark the pinnacle of evangelical influence, but rather the beginning of its decline. The Age of Evangelicalism chronicles the place and meaning of evangelical Christianity in America since 1970, a period Miller defines as America's "born-again years". This was a time of evangelical scares, born-again spectacles, and battles over faith in the public square. From the Jesus chic of the 1970s to the satanism panic of the 1980s, the culture wars of the 1990s, and the faith-based vogue of the early 2000s, evangelicalism expanded beyond churches and entered the mainstream in ways both subtly and obviously influential.

Born-again Christianity permeated nearly every area of American life. It was broad enough to encompass Hal Lindsey's doomsday prophecies and Marabel Morgan's sex advice, Jerry Falwell and Jimmy Carter. It made an unlikely convert of Bob Dylan and an unlikely president of a divorced Hollywood actor. As Miller shows, evangelicalism influenced not only its devotees but its many detractors: religious conservatives, secular liberals, and just about everyone in between. The Age of Evangelicalism contained multitudes: it was the age of Christian hippies and the "silent majority," of Footloose and The Passion of the Christ, of Tammy Faye Bakker the disgraced televangelist and Tammy Faye Messner the gay icon. Barack Obama was as much a part of it as Billy Graham.

The Age of Evangelicalism tells the captivating story of how born-again Christianity shaped the cultural and political climate in which millions of Americans came to terms with their times.

So we don't forget story need to be told

The author tells the story through the lens of American politics from Jimmy Carter up to the first term of Barack Obama. It's a history that I'm glad I read. Most of life is spent reacting to the events of the day but never having the time to put the events in the context that they belong. The book gives the reader the context (through the filter of politics and historical perspective) on the influence of Evangelicals (mostly from the Right) . The author reminds me of the beginning of the period with statements by people like Jerry Falwell saying things like "God does not hear the prayers of the Jew". That's what passed for critical thinking in those days. I had forgotten about the "Satanic Panic" and false accusations based on 'recovered memories' popularized by TV personalities such as Geraldo Rivera and Oprah Winfrey. I forgotten how influential the Evangelical Right was in those days.

I don't know why the author stops the story so abruptly at 2012 even though the book seemed to have been published in 2014. A more interesting story could have been told by looking at the waning of the influence of the Evangelical Right over the last 2 years.

The author, in a scholarly way, puts all of the events of the time period into their overall context and tells a fairly interesting story that should not be forgotten.