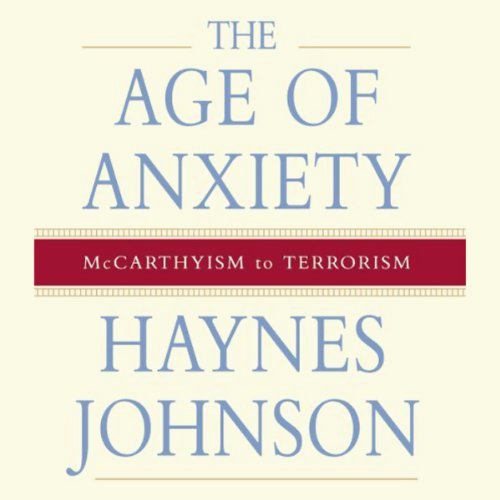 The Age of Anxiety

By: Haynes Johnson
Narrated by: Kristoffer Tabori
Try for £0.00

For five long years in the 1950s, Senator Joseph McCarthy and his anti-Communist crusade dominated the American scene, terrified politicians, and destroyed the lives of thousands of our citizens. In this masterful history, Haynes Johnson re-creates that time of crisis, of President Eisenhower, who hated McCarthy but would not attack him; of the Republican senators who cynically used McCarthy to win their own elections; of Edward R. Murrow, whose courageous TV broadcast began McCarthy's downfall; and of mild-mannered lawyer Joseph Welch, who finally shamed McCarthy into silence.

Johnson tells this monumental story through the lens of its relevance to our own time, when fear again affects American behavior and attitudes, for he believes now, as then, that our civil liberties, our Constitution, and our nation are at stake as we confront the ever more difficult task of balancing the need for national security with that of personal liberty.

"Pulitzer-winning journalist Johnson (The Best of Times) offers an engrossing account of the career of red-baiting demagogue Joseph McCarthy and a chilling description of his legacy for today." (Publishers Weekly)

What listeners say about The Age of Anxiety

What made the experience of listening to The Age of Anxiety the most enjoyable?

the whole story is top class.It is illuminating to look in on one of the most shocking abuses of political power in recent times.It is beautifully balanced and free of the usual party politics and ideology of a lot of the media these days

What was one of the most memorable moments of The Age of Anxiety?

It is hard to pick out a particular moment as it all flows so wellBut i guess i would pick out the revelation that Joe never had any evidence at all and as such could not pass any information to the relevant authorities.It was all pure bluff and obfuscation on the part of a vicious hectoring bully

yes it was but it wasn't quite possible.If this was in paper form it would certainly be described as hard to put down

this story is still so relevant to today and the given a free abuses of unchecked power especially given our age of fear and seeming trial by media.It shows why there must be judicial checks and balance and not to give to much power in just one man as none of us are able to completely curb ourselves if we are given a free reign
The relatively sombre tones of the narrator works well on such a works as it lets the story stand for itself

One of the best audiobooks I have ever listened to

The story is fascinating, if its not already a movie it should be. Its a very well researched book but without allowing the details from detracting from the story.

Johnson is brilliant in bringing to life this era of 50 years ago. You feel like you were there when he narrates the mistreatment of Stevens, the Army Secretary, in McCarthy's desperate attempt to get at Eisenhower through his attacks on the army. When Welch finally nails the senator at the army hearings, you want to just cheer.

The weakness of McCarthy's fellow colleagues is paralleled by that of today's senators, who bought off on the Bush/Powell weapons of mass destruction argument without proof. The parallel between McCarthy's use of fear of reds and today's administrations use of fear of terrorists is eerie.

Well-narrated, but "Roosevelt" is not "Rooosuhvelt" and never was.

It's not a study of the effect of McCarthyism so much as a presentation of how it happened and the people most intimately involved in the hearings. Great for wonks and history geeks.

absolutely a must hear

This book is a spectacular history lesson for those who want to understand our political system and its weaknesses. This is really a must read.

Starts a little slow and then becomes riveting!

Going into incredible depth in depicting McCarthy in the hearings. Mesmerizing!

All of it. Excellent reader,

The Red scare was incredibly pervasive in the American psyche in the early 1950s.

Tell a Lie enough and people will believe it.

Filled will half-truths and defamation. I find it appalling how those among us insist on rewriting history to fit their distorted view of what really happened.
The author is just one more small individual in a long line of small individuals who set their sights on greatness and hope to get there through the character assassination of an individual who outclasses them in every aspect of humanity. These small minded creatures glory in making false and malicious statements. They hope that you and I will believe their twisted, psychotic view history. They have lied to themselves for so many decades that the truth becomes whatever they say it is. Don't waste your time nor money on this - unless, of course, you are also standing in that long line of small individuals.