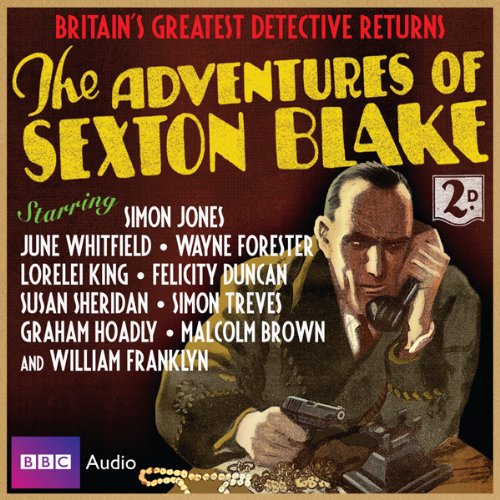 The Adventures of Sexton Blake

The Adventures of Sexton Blake

In a series of thrilling adventures packed with incident and hilarity, Sexton Blake, (Simon Jones, The Hitchhiker's Guide to the Galaxy) and his plucky assistant Tinker (Wayne Forester, Captain Scarlet), aided by Mrs Bardell (June Whitfield, Absolutely Fabulous) battle diabolical masterminds, bewitching thieves and sinister fiends, out-thinking them in the head and out-punching them in the jaw!

Also featured in this cinematic audio extravaganza from award-winning Dirk Maggs (The Hitchhiker's Guide to the Galaxy) is a cameo from BBC Radio's original Sexton Blake - the legendary and coolly dashing William Franklyn.

Hilarious and brilliant story and a rip roaring adventure that doesn't let up in it's pace!

What made the experience of listening to The Adventures of Sexton Blake the most enjoyable?

Was such a joy to listen to, the characters were interesting, the voice actors were fantastic and I really loved the sound effects - I felt like I was in the story as it was unfolding. Plus it was very funny.

Everything about the story was enjoyable and fun. So much excitement from the thrilling cases that have to be solved to the dangerous chases and fights. Like Sherlock Holmes meets Dick Tracey.

It's hard to choose which one as all the actors did a great job at portraying the character. But the main character, Sexton Blake was my favorite. The choice of casting for the voice was amazing, managed to really pull off a convincing role.

I have done, whilst traveling, specially on a long flight. Because it was a dramatization I really felt captivated by the whole story, that I was hard to press the stop button.

Dirk Maggs is probably the greatest producer of audio dramatizations, ever!

Simon Jones as ever is terrifically entertaining, with perfectly timed dry English comic wit and delivery; supported by a cast equally (or exceedingly) zany and the mad genius Dirk Maggs who paints a lush sonic madhouse tied together with a few inexplicable mysteries and ne'er do wells. I don't know much of the history of the Sexton Blake character, but this revival will have you hooked and eager for more audio adventures!

Short but certainly worth the money

What other book might you compare The Adventures of Sexton Blake to and why?

It has the same feeling of utter (and entertaining) madness as the hitchhikers guide to the galaxy.

There was an opportunity to reinvent Sexton but instead going for a parody was just silly.

Would you ever listen to anything by Dirk Maggs again?

Yes. His Batman adaptations are great.

The delivery is too fast for the storyline.

If you wishing Douglas had written some more

This starts in the middle of an adventure and ends in the middle of another. As far I can tell this is it though. It has a very Douglas Adams feel - it also feel more like an echo then an original. I would love to hear more but I kinda left with the same feel as being on vacation and finding a really great tv show on the local station - you WANT more then discovering when you get home it's not on DVD/Blu ray or any streaming service because it just a local thing.