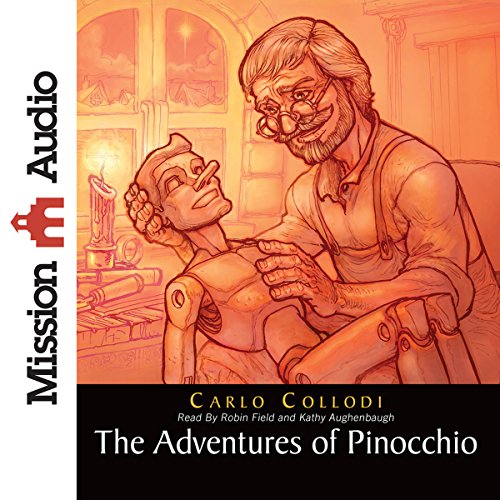 The Adventures of Pinocchio

By: Carlo Collodi
Narrated by: Robin Field
Try for £0.00

The classic tale of Pinocchio follows the adventures of a talking wooden puppet whose nose grew longer whenever he told a lie and who wanted more than anything else to become a real boy.

As carpenter Master Antonio begins to carve a block of pinewood into a leg for his table the log shouts out, "Don't strike me too hard!"

Frightened by the talking log, Master Cherry does not know what to do until his neighbor Geppetto drops by looking for a piece of wood to build a marionette. Antonio gives the block to Geppetto. And thus begins the life of Pinocchio, the puppet that turns into a boy.

Pinocchio, The Tale of a Puppet is a novel for children by Carlo Collodi is about the mischievous adventures of Pinocchio, an animated marionette, and his poor father, woodcarver Geppetto. It is considered a classic of children's literature and has spawned many derivative works of art. This is not the story we've seen in film, but the original version - full of harrowing adventures faced by Pinocchio.

What listeners say about The Adventures of Pinocchio

I loved the adventures of Pinocchio because he was a bad puppet and became a good boy. I was completely absorbed from beginning to end.

A lot of neat stuff starting with Pinocchio was made with bad wood. Ohh and so much more great story from a different time a lot more violent than any cartoon but truly good fun. Well worth your time and different from what you think you know. There are still morals in the story.

Not a great story, but insightful

The story feels at points little more than poorly-veiled metaphors weaved together into a coherent theme. While there is a clear goal and steady progression centred around Pinocchio, time and place often feel arbitrary and makes it hard to get entrenched into the world.

Would you be willing to try another book from Carlo Collodi? Why or why not?

The writing is subpar, even for its time. The author leaves no breathing room and rushes through events to get straight to the message. Characters feel monotone and superficial, atmosphere and scenery only get minimal attention. Exploring the world alongside Pinocchio didn't bring me much joy.

Have you listened to any of Robin Field’s other performances before? How does this one compare?

While this is my introduction to Robin I think he does the book justice with a wide array of spot-on characters and an amusing Italian accent. His Pinocchio can be hard on the ears, but that is rather due to how the character is written than the performance itself.

Was The Adventures of Pinocchio worth the listening time?

Due to my interest in the themes and metaphors it was well worth a listen. It has made me appreciate the adaptation by Disney that much more, where they elevated the world of Pinocchio to something more tangible (not by visuals but by storytelling, mind you) than this book ever did for me.

While I do not disagree with many of it's front-loaded morals, they don't make it much of a fun read. Even less so when read to children, who might marvel at some of the fantastical events but will be bored by its continuous preaching.