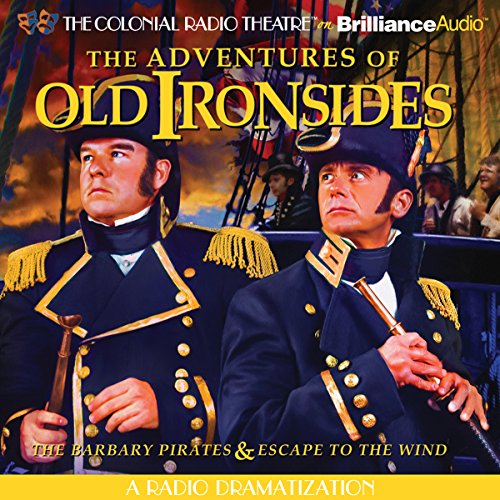 The Adventures of Old Ironsides

The Adventures of Old Ironsides

The USS Constitution is the world's oldest commissioned warship afloat, having been launched in 1797. The Adventures of Old Ironsides dramatizes two of her most exciting adventures. In "The Barbary Pirates" - the year is 1805, and Constitution battles Tripolitan Pirates to free the crew of the captured USS Philadelphia. An “edge of your seat” adventure, it is based totally on fact with nothing thrown in for dramatic effect - it didn’t need it!

In "Escape To The Wind", Constitution finds herself in the War of 1812, chased by a squadron of five British Warships. The wind dies down, and the ships are dead in the water, Captain Hull finds a way to distance himself from the superior force. An amazing but true story of Yankee ingenuity!

By culling through the records of the Captain’s logs, the Colonial Radio Theatre brings to life the adventures of the USS Constitution - Old Ironsides!

What would have made The Adventures of Old Ironsides better?

The story is really abbreviated. There is an attempt to make up what people would have said and how they would have talked, but it's not at all realistic.

It does tell a bit of the story that people might not otherwise know.

Consign this to the Briny Deep

Someone who enjoys poor radio performances.

Would you recommend The Adventures of Old Ironsides to your friends? Why or why not?

Nope. It is a good review of the story of the constitution but this is an example of poor radio performances gone worse.

Well, you would think an audio medium would use...oh, I don't know SOUND to tell a story.

If you could play editor, what scene or scenes would you have cut from The Adventures of Old Ironsides?

The early stages with the ambassador and the new captain on board. BORING!

Avoid at all costs.