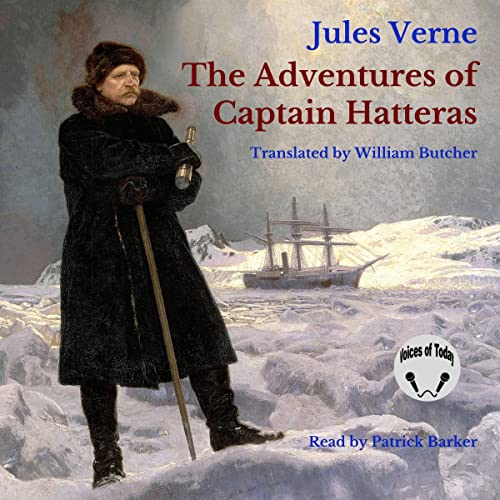 The Adventures of Captain Hatteras

By: Jules Verne,William Butcher
Narrated by: Patrick Barker
Try for £0.00

First Mate Shandon receives a mysterious letter asking him to construct a reinforced steamship in Liverpool. As he heads out for Melville Bay and the Arctic labyrinth, a crewman reveals himself to be John Hatteras, and his obsession, the North Pole. The captain is later abandoned by his crew and remains without resources at the coldest spot on earth. How can he find food and navigate the Polar Sea? And what will he find at the top of the world?

The Adventures of Captain Hatteras (1865), greatly admired by Ray Bradbury, is one of Verne’s most personal novels, with hypnotic descriptions of the icy wastes and gripping authenticity. The volcanic Pole, where the meridians and oceans meet, is a magical spot for a writer obsessed with physical space, allowing him to give unbridled rein to his creative imagination.

This is the first ever audio recording of one of Verne’s greatest masterpieces, translated by father of Verne Studies William Butcher and skillfully read by Patrick Barker, who vividly captures the characters’ social differences. A cutting-edge introduction and appendix are also included, containing the duel with the rival explorer and the final tragedy, cut by the original publisher.

What listeners say about The Adventures of Captain Hatteras

One of Verne’s best (though not as well known)

Voices of Today is becoming a presence to be reckoned with in the audiobook world, and they especially deserve attention from Verne aficionados. This is not the first Verne title they have done right by: some time ago, they did a fine version of Frederick Paul Walter’s translation of Five Weeks in a Balloon. They are clearly aware of the problem of Verne translations; and almost alone among audiobook publishers, they seem committed to picking the best translations to put into audio form. In both cases they give full credit to the translator, and the audio includes extensive introductory material. With luck there will be more to come from this source. With these two titles to go by, I would be willing to buy any future Verne offerings from them sight unseen.

This was not a Verne title I was aware of when I was a young reader of Verne. Had it not been translated by William Butcher, had I not already been a fan of his other work for Oxford World’s Classics, I’m not sure I would have picked this one up as an adult. And yet it has become one of my favorite Verne novels, and it is surely one of the most gripping and convincing tales of the Arctic ever written. At the risk of giving our spoilers, I’ll say also that it is ultimately one of the darkest and most tragic of his novels. (At the same time, it contains one of Verne’s most delightful characters, the multitalented man of science Dr Clawbonny.)

Patrick Barker has a strong regional accent, and not one that I would have expected to hear when listening to a Verne novel. But the novel does start out in Liverpool with Liverpudlians, and it took only a chapter and a half for me to adjust to his style. (I’m not claiming to have identified his accent specifically as Liverpudlian: my American ears are too provincial for that.) Barker is especially effective at the dialogue and at providing distinctive characterizations for each speaker. I’m really enjoying it, and I’m pretty demanding when it comes to audiobooks.

If you’re in the market for a good Verne “read,” check this one out.

Also, if you’re a Verne fan, be aware that the translator here, William Butcher, has written a brilliant biography of Verne that includes extensive discussions of his working methods, with quotes from the manuscripts and comparisons with the final versions of the novels. It is available from Audible in a recently revised edition narrated by Simon Vance.