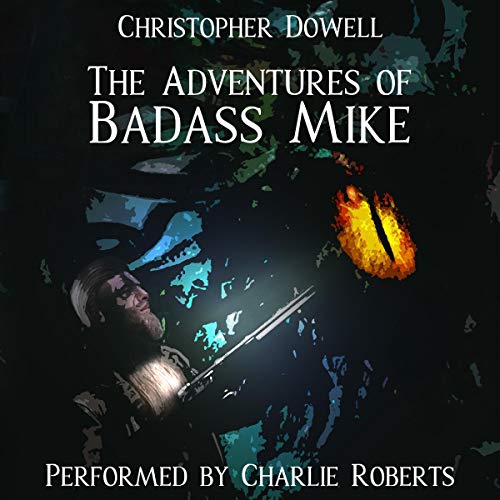 The Adventures of Badass Mike

For a formerly mindless thrall, Badass Mike’s life isn’t easy. Ever since he got into a tussle with the American justice system, his body has been forced to wander the Earth while his head is trapped in a jar. He could, of course, rely on his new acquaintance Billy Bitchcakes to help him out - that is if the little guy isn’t too busy working on his “brand”. Oh, and there’s also his lawyer, whose name is...what the fuck is her name?

Until he can recover his stolen humanity, he’ll have to rely on his wits (or lack thereof), his double-barreled shotgun, and his glistening chest hair as he battles hordes of hellspawn. And he might have to battle a few poltergeists, clowns, and a prelaw college super senior who says “bro” a lot, bro.

What listeners say about The Adventures of Badass Mike

This book is crude. Like, very much so. That said, if you’re into inappropriate body humor this book is great! Badass Mike and Billy Bitchcakes are going to be in my mind for a long time. Hope we get a sequel.

The narrator KILLED IT!

This book is a big departure from the romances and thrillers I usually enjoy, but I'm a long-time fan of slapstick and insane humor. I had to give this one a try. I'm so glad I did!
Badass Mike is a weirdly engaging hero. With or without his head, he is unable to turn down sex with anyone who offers it, he can't participate in a fight until he's removed his shirt, he thinks everyone except him is a moron, and he has an obsession with burritos - especially those from Taco Bell. Those are just a few of Badass Mike's traits. (Don't try to call him Mike. The entire name is all he will accept.)
As Badass Mike and various crazy new friends work together to try to legally reunite his body and head, we are taken on a wild and crazy ride. This ride is not for the faint of heart, and please listen to me here. If you are offended by language, vulgarity, or sheer stupidity, then this is not the book for you! If, however, you can imagine enjoying a story including more degrading terms for sex organs than you've ever heard in your life, way too much poop and vomit spewing, drunk and stoned polterbros, killer clowns, big-headed intelligent babies, magic-wielding lawyers, dick pics as branding, and oh so much more insanity - while also occasionally being personally insulted... then this might be the book for you.
While there were moments that completely grossed me out, I was still rooting for Badass Mike to succeed on his quest. The author must have some crazy dreams at night, to be able to come up with all the different elements that made up this story. He definitely has a great deal of talent. I rolled my eyes, laughed out loud, and even talked back to the narrator.
Speaking of the narrator, he was absolutely amazing. From all the different characters he performed so well, to the explanations and comments thrown at the listener at various times, he was fantastic. I will look for more of his work.
I was given this free review copy audiobook at my request and have voluntarily left this review.

absolutely loved this one!

So, this was a fantastic book! I absolutely laughed out loud and blazed through it. It is completely over the top and a bit campy, but it worked. This has a very Bruce Campbell feel to it (TOTALLY A GOOD THING) and I loved every second of it. The narration is perfect for the story and its characters. I would caution any potential listeners to make sure you are not thin skinned and prone to offense by coarse language, violence and the like. If that sort of thing doesn't bother you, or you get a kick out of it like me, then you should definitely check this book out!

TLDR; The best description I can give for this is the headline if I had to compare it to something Crank: High Voltage is the closest I can think of, there are some similarities to Mogworld also.

So this is an odd one to review, I really enjoyed it, but you have to have the right sense of humor. If you think dick jokes and constant swearing is funny you'll get a kick out of this. If you don't... well this probably won't appeal. There's nothing serious in this book, basically, every line is a joke and a few are made at the expense of the reader, which I got a kick out of. The story is a fairly simple one, a beheaded thrall is trying to get his body back, but the process is a ridiculous ride, and makes as much sense as some of the main characters' one-liners.

All in all, if you have the right sense of humor and you're looking for a good laugh this is a great book. If the description doesn't sound interesting at all, then it probably isn't for you.

If you're a fan of grossout and stupid humor, this book is for you. I don't think I've ever laughed harder than I have at some of the moments in this.

And the narration is beyond great. Anything that was good in the print version of the book is made even better by Roberts' narration. I hope he does more books, because I'll listen to all of them.