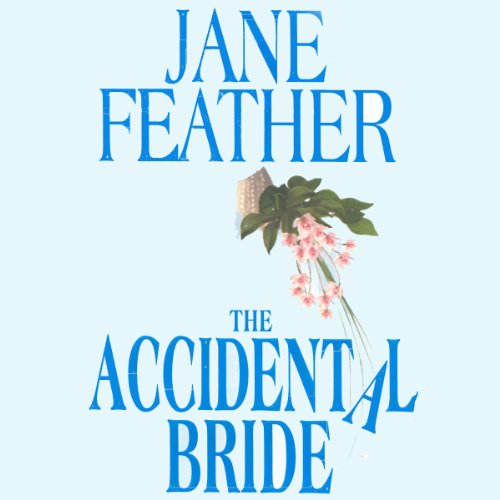 By: Jane Feather
Narrated by: Jenny Sterlin
Try for £0.00

The second book in Jane Feather's "Bride Trilogy" follows the romantic and sensual transformation of Phoebe, the awkward sister-in-law of a dashing and handsome widower (Cato, the Marquis of Granville). Young Phoebe, an unlikely heroine, is forced to marry Cato and soon finds that her anti-connubial principles aren't as fixed as she thought.

Actress Jenny Sterlin seems as invested in this historical romance as the characters themselves. Sterlin takes copious notes on books before she begins recording (more than 70 titles to date), bringing a textured, fully realized interpretation to her performances. This English actress (and author) is an Earphones Award winner, adept at bringing to life a wide range of literary genres.

In my Brides Trilogy, three unconventional young women vow they will never marry - only to be overtaken by destiny. The Accidental Bride could only be the story of Phoebe, the "awkward" one. For four years, Cato, the Marquis of Granville, had been just another man - the uninteresting, somewhat intimidating husband of Phoebe's older sister. But then her sister died, and Phoebe seemed a reasonable substitute. Her forced engagement to him should have been quite a cold-blooded arrangement...except that one day Phoebe looked at Granville - really looked at him - and saw what she'd never seen before: he was darkly, breathtakingly attractive.

Once she'd noticed, she couldn't seem to stop noticing, and suddenly, Phoebe was disastrously in love. It would be nothing short of torture to be married to Granville, knowing he didn't love her and never would. After all, Phoebe was not the kind of woman men fell in love with - Phoebe with her untidy hair, her rumpled clothes, and her fingers forever ink-stained from the poetry she wrote. When running away does not solve her problems, Phoebe decides to try something a little different - something that involves a little change in wardrobe, a daring new attitude, and a bit of brazen seduction. Granville is about to discover that his awkward Phoebe is woman enough even for him.

What listeners say about The Accidental Bride

Jane Feather is always a good read and Jenny Sterlin is one of my favorite narrators . Almost 12 hours of pure enjoyment! I'll be rereading this one!

Cato is an ass to the end

I kept hoping for him to redeem himself but he treats Phoebe like crap right until the end. He is a pompous ass.

I love the story and the narrator voice. One of my favorite books, plot & characters

Another Very Well-Written Addition to the Series..

As the second book in the Bride Trilogy, I came in to this book so curious to see what transformation Cato's character would take on. After all, he marries his daughter, Olivia's friend, Phoebe (his widow's sister) and if that's not too close for comfort, I don't know what is. But, I suppose that Cato can easily take on Phoebe, as his wife because it's a calculated decision and it's much like picking out another hen from the henhouse, at least initially.

Cato is interesting because he plays an important role in the politics and constant shifting in the civil war in England. You definitely get the sense that his is a man's world and Phoebe, especially, is a pawn in this game between men, properties, and power. But, Phoebe, sweet, lovely Phoebe is a fierce, little one. Her clothes may get disheveled, but its only because she constantly on the move with her creative mind and giving heart. And, it's all of these qualities that eventually bring Cato out of his cold existence. Cato comes to experience passion and love with his wife, Phoebe and that was a pretty big accomplishment considering his starting point.

There were times when my 21st sensibilities sometimes got in the way of my enjoyment of this book (I thought I would scream if Phoebe referred to Cato as "my lord" one more time during a disagreement when he's being a complete ass). Yet, overall you can't complain much about Feather's writing, because it's simply superb. She develops this very interesting world, layered with danger, lurking villains, and she does friendship and romance well. Also, Jenny Sterlin was an excellent narrator. I very much enjoyed her performance as she brought this world to life.

I’ve enjoyed reading this series so far. I’m starting the third book in the series today, these first two books have been excellent, very entertaining indeed.

Second in the Brides series

I initially read these books out of order and gave the last book a terrible review, I have since revised that review.

This book was not as good as the "Hostage Bride", for me, but I admit that was because the main female character irritated me to no end. But, the ability to make the reader enjoy a book, despite disliking the characters, is one of the things that makes Ms. Feather such a talented writer

Phoebe's personality is so intense and the things she does makes the reader want to reach in and give her a big shake! But then, when I was 17 I'm sure my parents frequently wanted to shake some sense into me!

Several other reviewers complained about the age difference between Phoebe and the Earl, and the fact that Phoebe is his daughter's best friend. I think we have to remember the time period and the importance of marriages of convenience during that time period.

I did not particularly like the Earl either! Yes, he is cold and remote, but, he too is a man of his time period. I liked the way Phoebe "seduced" him after having been married to him for a while at that point. Ms. Feather illustrates that although older and married 3 times previously, his perceptions of what women thought of the marriage bed was flawed, and he could learn from a 17 year old girl!

Yes, I recommend this book, but only after reading the "Hostage Bride". Then finish the series with the "Least Likely Bride". I think these characters will be with me a long time.

Oh, and I too wonder why Ms. Feather included the 2 little girls from the Earl's marriage to Phoebe's evil sister Diana. I find myself wondering if she plans to have them grow up totally evil due to being so totally ignored! I guess I just don't want to see this series end! Hmmm, are you listening Ms. Feather?