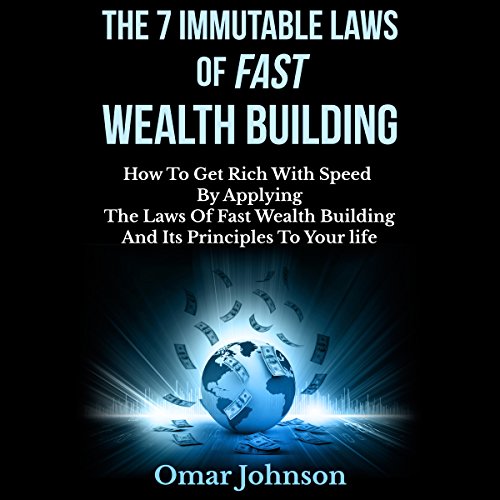 How to Get Rich with Speed by Applying the Laws of Fast Wealth Building and Its Principles to Your Life
By: Omar Johnson
Narrated by: David Golightly
Length: 1 hr and 14 mins
Categories: Health & Personal Development, How To
5 out of 5 stars 5.0 (1 rating)

Many people aspire to build wealth but a great deal of them will fall short of this much desired goal. In most cases, it's not because of a lack of drive or ambition but simply because people lack the true knowledge of not only how to build wealth but how to build it fast. They are constantly bombarded by the senseless propaganda spread by the "get rich slowly gurus" who advocate that in order to build wealth you have to:

The shocking reality is that you can't build wealth this way because these tenets have absolutely nothing to do with wealth building. And if you believe that they do then you have been brainwashed to believe that income from a job equals wealth. It doesn't! You also have been brainwashed to believe that saving money from your paycheck and putting it into a bank that pays less than 1% interest and living below your means will allow you to create and build wealth. It won't! However, what will allow you to build wealth and allow you to build it fast is knowing and understanding the actual laws of wealth building and its associated principles then applying them.

In his audiobook entitled The 7 Immutable Laws of Fast Wealth Building author and serial entrepreneur Omar Johnson gives you the information that is necessary for you to put together your plan for wealth creation, wealth multiplication, and wealth preservation, the three cornerstones of fast wealth building.

I wish I could read this little book every day!

In a word this was masterful! I learned so much and wish it could have gone on. Mr Johnson took the time to make these much needed lesson make since. I think I liked it so much because it made me look at both my motivation for wanting wealth and method for getting it in a different light.

Straight and too the point

You will have to listen more then once to internalize strategies and concepts. Thank you

Short and to the point

What did you love best about The 7 Immutable Laws of Fast Wealth Building?

Direct and to the point, with short examples that can relate to most people

it can apply to anyone looking for wealth

The view on it can be applied with "TO-DO"