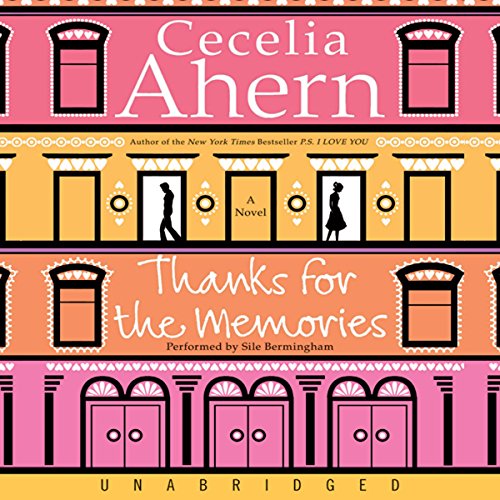 Thanks for the Memories

Thanks for the Memories

New York Times best-selling author Cecelia Ahern's charming new novel explores what happens when "what if" becomes a reality for two strangers whose lives are at a crossroads.

How can you know someone you've never met? That's the question haunting Joyce Conway these days. Recovering from a terrible accident and with her marriage in pieces, Joyce is suddenly plagued by an overwhelming sense of déjà vu that makes her feel as if the life she's living is not her own. During the day she has vivid memories of things she's never seen - such as cobblestoned Parisian streets she's never visited - and at night she dreams of a little girl she's sure she's never met.

Joyce is convinced she's lost her mind . . . until a series of coincidences leads her on a journey to meet the one person who may hold the answer she needs.

"Someone's life could be depending on you right now...." That's the pitch that finally persuades Justin Hitchcock to donate blood - the first thing to come straight from his heart in a long time. Restless and lonely, Justin chased his ex-wife and daughter from Chicago to London, and now he's in Dublin, guest-lecturing to bored college students. When he receives a basket of muffins with a thank-you note attached, he's sure someone's playing a joke on him, but then the presents keep coming. Intrigued, Justin is determined to solve the mystery - a quest that will change his life forever.

Thanks for the Memories is a heartwarming story of hope, love, and second chances - Cecelia Ahern's most magical novel yet.

This narrator is awful

What disappointed you about Thanks for the Memories?

I had to switch over to the Kindle version of the book because the narrator's lisp and congested voice were too distracting. I usually enjoy Cecelia Ahern books & hopefully the written version is better than the audible because this is horrible.

She has a lisp, sounds congested and doesn't differentiate between character's voices very much.

Cecelia Ahearn's 'Thanks for the Memories' is an easy, sweet listen populated by wonderful characters who will make you laugh out loud. It's a deceptively simple and silly story told with more intelligence, grace and insight than most literary authors.

Don't skip this one!

I love Cecelia Ahern's books, but I could not get past the narrator and had to stop. I feel ripped off.

This is a really fun book. Please be warned, if you are going to be in public listening to this book you will laugh out loud multiple times and have a stupid grin on your face the rest of the time. Another delightful book from Aherns, she has a real knack for displaying her characters in such a heartfelt, and realistic fashion. She uses whimsical ideas to get to the core of the deepest emotions of her characters to which every reader can relate. Delightful!

Read like a movie. This was fun and romantic. I'll be reading more. Performer used more of a queens/Brooklyn accent vs. Chicago but she grew on me. I'm sure it's no worse than Americans doing an Irish accent. Haha. I'll look for more with this reader and by this author.

Second only to ps. I love you.

My favorite story of hers only second to her epic debut book.
I love that it's not the same old Hollywood ending that you'd expect.

Not her best, but not bad. It was a heartwarming story, but the narrator's HORRIBLE American accent left a lot to be desired.

Would you be willing to try another book from Cecelia Ahern? Why or why not?

Of course. Her stories are heartwarming and even inspiring in the case of "Time of Your Life".

Her American accent was awful and obnoxious.

Did Thanks for the Memories inspire you to do anything?

Live life to the fullest.

I loved this book. I starts out sad, but it develops into an amazingly unique love story. It's funny, lol funny, insightful, and a sheer pleasure to read. Don't miss this one.

The story line wasn't too bad, but it drug on and on, I thought I would never get to the end.