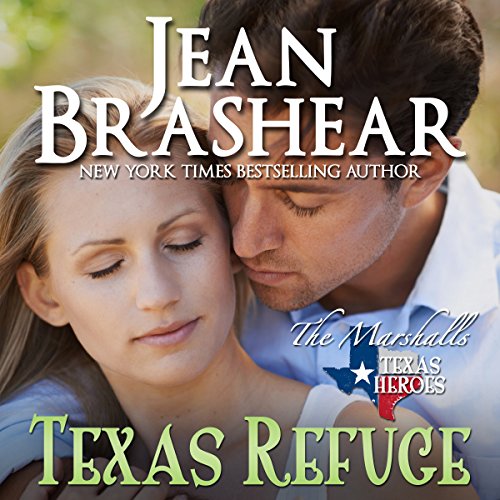 Quinn Marshall is haunted after nearly dying in a failed attempt to save his sister. The last thing the former Houston homicide detective wants is another woman to watch over, but someone important to his brother Josh is in trouble, and Quinn's basic nature is to protect.

Soap opera star Lorie Chandler has already lost her husband to an obsessed fan and now her son is the madman's new target.

While the police hunt the killer, Quinn's rugged Texas ranch is the ideal hiding place for Lorie and her child. Neither Quinn nor Lorie expects the explosive heat or the powerful emotion that flares to life in his canyon refuge, yet there is no future for them and both are painfully aware that their time together can only be temporary.

When the madman finds them, Quinn's sole focus is on keeping Lorie and the boy he's come to love safe, even though his success will mean that he will have to give them up to a life where he cannot belong.

"Jean Brashear's distinctive storytelling voice instantly draws in the reader. She writes with warmth and emotional truth. The depth of her understanding of human nature marks her as a writer to watch, a writer to read, and a writer to enjoy." ( New York Times best-selling author, Debbie Macomber)
"Gifting readers with another emotionally charged romance, Ms. Brashear has a fine knack for commingling full-bodied characters, a fast-moving storyline, and just the right measure of passion." ( Romantic Times Bookclub Magazine)
"Jean Brashear has that "it" factor. She is an incredibly talented writer who can hit every note with enough clarity to bring the reader tears, laughter, or just, 'Oh, my, this is an amazing story." ( New York Times best-selling author, Stella Cameron)

Quinn Marshall is still dealing with feelings of guilt after not being able to save his sister from a stalker so when his brother asks him to help a friend with a similar problem he is a bit hesitant. Lorie Chandler has already lost her husband and is desperate not to lose her son, Grant, to the same madman. When they meet there is an immediate connection and Quinn will do anything to keep Lorie and Grant safe. Grant is just adorable and really adds to the story. Quinn is the ultimate hero; so caring and treats Lorie so tenderly after her ordeal. Jean Brashear never fails to give an edge of your seat, action packed storyline that you can’t put down. This one was truly heart wrenching. And of course Eric Dove always delivers these stories so skillfully that we are drawn into the story and time goes by before we know it. Now on to Josh’s story!

I loved this book, a story line that hooked me, from the beginning. A sensitive subject matter was handled well (very different and personal for everyone.) The narration was spot on, fit the character.

I thoroughly enjoyed this story. The narrator, Eric G. Dove, brought Lorie and Quinn to life. They showed that love of family and between a man and woman were important. Lorie was so brave and independent despite the violence surrounding her. Quinn's protectiveness made him a wonderful man to have on one's side. Between the story and the narrator, I was brought to tears at times, laughed and smiled other times. I did not want to stop listening, and I look forward to the next in the series as the secondary characters were just as much fun.

I received a copy of this audiobook as a gift, and this is my unsolicited review.

I have both read and listened to this book by Jean Brashear. The characters are strong, but vulnerable. There's a bit of paranormal, but not over done. It is one of my favorites.

Eric G Dove is an excellent narrator. His voice is so soothing and easy to listen to.

Not recommended for a reader who has been stalked

Quinn Marshall is an ex-cop who has a gift he doesn't want: prophetic dreams. Lorie Chandler is a widowed mother who doesn't know she needs Quinn's gift to protect herself and her son. Quinn resists his supernatural ability, insisting that he operate in the realm of "reality." Lorie's intention is to handle everything herself, even though she is in over her head. The only thing that gives her a reason to cooperate with Quinn is her love for her son.

The plot was very good, intense, suspenseful. Quinn and Lorie both needed a smack upside their heads: Lorie for thinking she had to face her stalker to protect her son and Quinn; Quinn for not accepting his gift and learning to use it before it was almost too late. Lorie's son, Grant, and Quinn's great aunt,Tia Consuela soften the sharp edges. Josh will have his own book.

As I noted in the headline, this is probably not a read for someone who has been stalked. I haven't, but I really didn't listen carefully the second time because of the feelings I had during the first listening. Readers of Nora Roberts books will enjoy Texas Refuge.

Mr. Dove has a pleasant voice that lends itself to both sexes, all ages. He does amp up the tension between the characters. Ms. Brashear continues to produce excellent reading and listening experiences.

Visions of a Stalker

The narrator, Eric Dove, was very good. He manages to keep you so engaged in the story that you forget he is reading all the characters.

I read this book a few years ago, but listening to the audio book made it seem even more suspenseful. This was a good story on its own merit. Quinn and Lori had a strong connection along with the intense chemistry they shared. I enjoyed Quinn and Grant's relationship. Quinn's gift was an interesting addition to the story. Having Tia Consuela and Lori helping him to embrace it, made me wonder if they noticed that Grant seemed to have a gift of his own.

I love an audiobook because I don't have to miss out my reading. I can continue to do other things while listening to the book.

I voluntarily listened and reviewed this audiobook.

Lorie is targeted by a desperate stalker, placing herself and her son Grant in danger. Quinn's life changed drastically when his sister was murdered. Now, another woman is in danger and haunts his dreams. Quinn and Grant's relationship and Quinn's dreams were the best parts of this book.Lorie wants to continue with her career, takes her safety for granted, and underestimates the darkness of the stalker. I voluntarily reviewed this book.

I enjoyed Texas Refuge very much. This audible, narrated by Eric G. Dove, is terrific. Jean Brashear does have a gift! She writes such wonderful stories that capture my attention from the start. Always excellent character development and plot. Lorie, an actress has a psychopath after her. She is widowed with a son, Grant, living in the city. Meanwhile, her co-star, Josh, has a brother, Quinn in town to visit. Quinn is a a retired homicide detective. Well, I recommend this audible to anyone that enjoys great writing and great narrating. No spoilers from me! I received this audible for free and have chosen to provide my honest review.

Suspenseful yet loving at the same time

Jean Brashear has a way of touching your heart through her writing. This book has hope, love and ever ending laughter. Quinn and Lori are great together. This book has just the right amount of love and suspense throughout the book to keep you glued.

Eric G. Dove is one of my favorite narrator's out there, you can hear the passion of the characters. He does a great job differentiating the characters.

Jean writes such sweet, sassy story with so much love and passion that the books just suck you in.

Texas Refuge is tale of strength in times of despair. Brashear truly got underneath my skin with Quinn and Lori. Whether playing the hero or struggling with guilt, Quinn is a sight to behold. He never wanted to be a hero, but that's the only life he knows. After tragedy hits too close to home, he questions his choices even as he continues to do what's right. Lori is the salvation he seeks, but in his life danger is never far away and this time, another heartbreaking may be his undoing. From Brashear's haunting words to Dove's emotional delivery, Texas Refuge gave me chills.