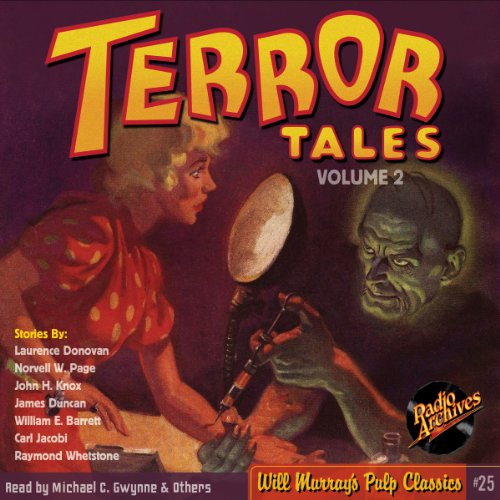 In 1934, a new type of magazine was born. Known by various names - the shudder pulps, mystery-terror magazines, horror-terror magazines - weird menace is the sub-genre term that has survived today. Terror Tales magazine was one of the most popular. It came from Popular Publications, whose publisher Harry Steeger was inspired by the Grand Guignol theater of Paris. This breed of pulp story survived less than ten years, but in that time, they became infamous, even to this day. This audiobook contains a collection of stories from the pages of Terror Tales magazine, all written by Wyatt Blassingame, reissued for today’s listeners in electronic format.

Terror Tales: An Introduction by Will Murray

The man who had never known fear shrieked and groveled in the snare of the girl who was more beautiful than life - more horrible than death!

In his veins throbbed the dread command no man is strong enough to disobey!

Dave McDermond little dreamed that he was challenging a hell-born power capable of shaking the Earth!

"We Danced With Death": July-August 1936 issue of Terror Tales by Wyatt Blassingame

The gleaming, sinuous bodies of the dancers writhed in paroxysms of blazing passion - and as they watched, Dave Archer and the girl he loved were all unknowingly being enslaved to the forces of hell conjured up by Satan’s dark mistress!

Only those ominously luxurious orchids could reveal to Tom Blade the place from whence came the gorgeous, seductive creature who was draining him of his very life!

"And Only Death Shall Save!": March-April 1937 issue of Terror Tales by Wyatt Blassingame

Janis, crawling on her hands and knees, would beg that son of hell to take her - and the man who loved her would plead with her to hasten! That was the curse, against which this young couple thought their love would guard them...

Will Murray’s Pulp Classics line of audiobooks are of the highest quality and feature the great Pulp Fiction stories of the 1930s-1950s.