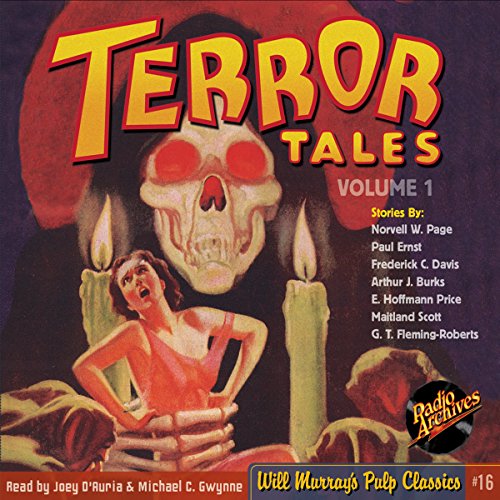 Among fans of classic pulp fiction, aficionados of supernatural stories consider Popular Publications' Terror Tales, the magazine, for people who found the Lovecraftian stories in Weird Tales too tame and Universal's classic monsters too Hollywood!

Between 1934 and 1941, Terror Tales and its legion of unholy authors spewed forth an unremitting litany of horror, terror, torment, and torture - all directed at ordinary American couples faced with supernatural menaces torn from their deepest, darkest nightmares. Think Scream during the Great Depression.

We have selected seven of the most compelling stories torn from the pages of Terror Tales for this sampler from hell.

In Paul Ernst's horrific "The Mummy Maker", an innocent woman faces the fearsome fate of being mummified alive! Norvell Page's disquieting "Accursed Thirst" takes us into the dark mind of a vampire - or is it a werewolf? The specter of a dead Egyptian deity loosed upon the modern world comes alive in E. Hoffmann Price's eerie "The Cat Goddess". Asian elementals harass the curious in Arthur J. Burks' creepy "Six Doors to Death". G. T. Fleming-Robert's gruesome "Moulder of Monsters" serves up twisted human flesh. Maitland Scott's unsettling "Shadows of Desire" leads us inexorably to a traumatic climax. Finally, terror and horror compete for supremacy in Frederick C. Davis deeply disturbing "Dig Deep the Graves!"

Terror Tales is narrated with appropriate doom-laden solemnity by Joey D'Auria and Michael C. Gwynne. Shivers await! Horrors abound! Try not to listen after midnight. We are serious about this. Not for children!