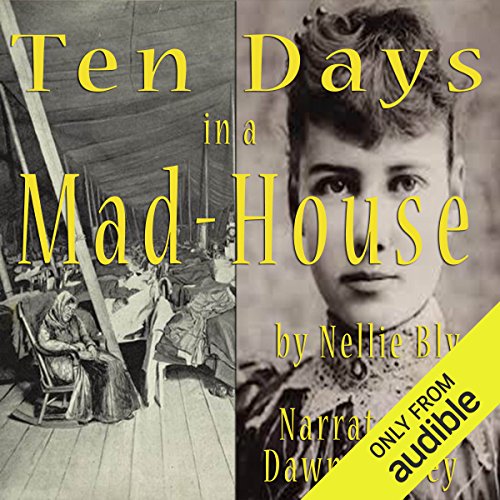 Ten Days in a Mad-House

Nellie Bly, born Elizabeth Jane Cochran on May 5, 1864, was an American journalist, author, and charity worker who received initial renown after writing a stinging expose of the mistreatment of the mentally ill while faking insanity and living undercover at a New York mental institution. At a time when women were just beginning to break into the field of journalism, the type of undercover investigative reporting undertaken by Bly set an important precedent, allowing her to successfully pioneer working in the male dominated field of newspaper writing.

Bly addressed social issues that desperately needed attention at the turn of the 20th century; issues that affected not only women but all minorities marginalized by society. Bly reported the news from the perspective of a woman and, as such, helped to elevate the role of women in American society. Bly writes from the heart and we feel intensely the sadness and hopelessness she feels for the inhabitants of the institution who will likely be held captive for the rest of their lives.

Dawn Harvey is a stage and film actress, as well as an audiobook narrator. Dawn’s rich, dulcet tones, and her quirky style, will take you on a thoroughly engrossing ride in Ten Days in a Mad-House.

What listeners say about Ten Days in a Mad-House

Remains an excellent reporting of conditions of the time. Audio Performance more than ably done.

If you could sum up Ten Days in a Mad-House in three words, what would they be?

Dawn Harvey takes us on a tour of the Mad House that will make you believe that you are hearing the story from Nellie Bly, herself. Excellent read!

Dawn Harvey is a name I associate with quality audiobooks. She always provides the listener an enjoyable experience.

This book made me feel sad that at one time, a visit to the Mad House was a strong possibility for many.

What made the experience of listening to Ten Days in a Mad-House the most enjoyable?

The narrator voiced the character of Nellie Bly in a very believable style. I could picture her as she pioneered work as an undercover investigative reporter who, by choice, moved from her life of personal freedom and choice to a life and place of complete loss of self and soul in a mental institution of her time. Feigning mental illness, Nellie Bly was committed to a mental institution where she submitted her person to the will of society and to a place offering little hope and much despair for those who entered its doors. The story was very revealing and eye-opening about mental illness (some real and some not at all) as it was treated in the late 1800s in our country.

What other book might you compare Ten Days in a Mad-House to and why?

"One Flew Over the Cuckoo's Nest" comes to mind. However, I found "Ten Days" work very interesting and thought provoking. The fact that this woman, Nellie Bly, made this journey for the good of others at the expense of self was certainly commendable. This work paved the way for women in the investigative reporting arena.

Which character – as performed by Dawn Harvey – was your favorite?

The author skillfully presented her story from beginning to end. The characters were interesting and I believed them to be representative of the time and era. I loved the narrator's performance. Her style was perfect for the main character and also for the supporting characters.

The history of the treatment of mental disease during this era was most interesting to me.

This book reveals the society as it was in the late 1800s and we learn so much about mental illness and care of those who are dealing with this in their lives. I would recommend the book!

Nelly Bly, a reporter, goes undercover as a "crazy" woman and is committed to a mental institution (where most, ultimately, spend the rest of their lives). It is a narrative of the treatment of the mentally ill (and some perfectly normal women) in the early 20th century. Frightening and disturbing~Nelly was a brave young woman.

When a Dauntless reporter decides to become Oliver Twist

The audio version of Nelly Bly's "Ten Days in a Mad House", read by Dawn Harvey, is an entertaining and quick read. The writing is wonderfully unembellished; the subject is fascinating and the delivery was well done.

It was ok, but could have been a short article

It was an interesting, historical perspective but could have been a lot shorter. It was a window into Victorian investigative journalism.

Interesting but difficult to complete

This book was very difficult to get through so, though I was committed, it took over 2 months for me to complete it. The story itself was intriguing and I cannot blame the reader for the dispassionate delivery as I expect it was written just so. Very precise and without embellishments.

Every bad thing you ever heard of Asylums!

Quite a story. This is a book of horrors. It made me feel like what it must have been to be in this situation with no way out. The writer must have been brave or half nuts to make it through the full ten days.

Interesting story about the sad treatment of the insane. Worth a listen. Amazingly brave undercover work.

I didn't actually listen to most of it, so my reading of the performance is probably not the most reliable, but I listened to the sample, and I read the book
Wow! This is an old book that discusses an ongoing issue. The picture drawn of the "madhouse" is disturbing! I like to believe that insane asylums are better now, and I actually do believe that they are, but it's really easy to see how simple it is to abuse the system and get away with it. This book by Nellie Bly is truly a cautionary tale as well as illustrative!