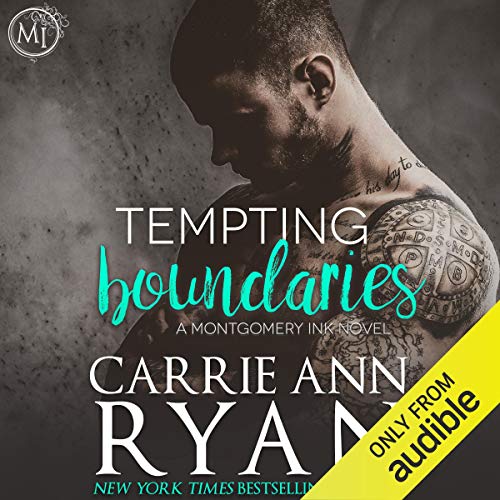 By: Carrie Ann Ryan
Narrated by: Gregory Salinas
Try for £0.00

Decker Kenrick knows it's wrong to have feelings for his best friend's little sister, but that doesn't stop his thoughts from going down that path. No matter how hard he's tried to stay away from Miranda, once she gets her sights on him, there's no backing down.

Miranda Montgomery might be the youngest of the Montgomery clan, but that doesn't means she doesn't know what she wants. Namely, Decker. She's loved him for as long as she can remember and won't walk away until she gives it her all.

But once they give in, not all is at it seems. Decker's father's out of jail and someone from Miranda's past isn't happy with the new relationship. Even as they start to move on and overcome their pain, they'll find that their inner obstacles are the ones they'll have to face first.

What listeners say about Tempting Boundaries

This one has definitely cemented the fact that Carrie Ann Ryan can write and is not just an author but a Master at writing. The characters are interesting and the storyline is very tight. Loved loved loved this book

fantastic read couldn't put it down

Where does Tempting Boundaries rank among all the audiobooks you’ve listened to so far?

What other book might you compare Tempting Boundaries to, and why?

Have you listened to any of Gregory Salinas’s other performances? How does this one compare?

Love me some ink

Did not disappoint me at all. Love the writer she always seems to make everything fit into place. Can't wait for next book.

Decker has always been considered a part of the Montgomery family - by everyone but himself. He has always seen himself as an outsider because of his past. The shadow his father placed over his family has haunted Decker his whole life. Now that Miranda has opened herself to him, Decker must come to terms with his demons. Meanwhile, Miranda has decided to live a little, after waiting on Decker for most of her life. However, the man she decides to see is more dangerous than she could have imagined.

If you're looking for a bit of suspense in your tattoo romance, this is the book for you!

Decker always wanted to belong to the Montgomery family, loving and wanting Miranda was always there but he did not want to upset everyone, Miranda wanted Decker forever when they take that chance and Decker gets scared and leaves will she take him back?

What did you love best about Tempting Boundaries?

Miranda Montgomery. Omg I love this girl. You will fall completely 100% in love with this kick ass, strong willed baby of the Montgomery clan.

What other book might you compare Tempting Boundaries to and why?

You can only compare to the other books in this series. Because this series is one of kind.

Which character – as performed by Gregory Salinas – was your favorite?

Miranda Montgomery. Because I see so much of myself in her.

This is a awesome audio/book. The battle between Miranda and Decker is one of a kind. He is part of the family best friends with Miranda's brother Griffin. Once they cross the line how many will get hurt.

Tempting is the perfect word!!

Oh boy does this book have a lot going on. Miranda is the youngest of the Montgomery siblings. She has been in love with her brother's best friend for as long as she can remember. Decker is the best friend and he feels the same way about Miranda. There is the normal relationship angst but there is so much more. Miranda has a stalker. Decker has "I'm not good enough" issues that stem from a dysfunctional family and when I say dysfunctional that is an understatement. This might be my favorite Montgomery book so far. I love a good, unrequited love book. With this book you get that and so much more!!

What did you love best about Tempting Boundaries?

The whole story is great. Decker having to overcome so much and fight for what he really wants.

What was one of the most memorable moments of Tempting Boundaries?

When Decker goes to Miranda at his best friends house to get her back.

What does Gregory Salinas bring to the story that you wouldn’t experience if you just read the book?

Yes. This book was great.

This book also shows how kids that come from an abused family can make something out of themselves with a little bit of love and support from a loving family.

This series just gets better and better

I found myself walking around with the phone listening to this book. The narrator's style is not to my taste but the story line makes up for that's. Great read.

What made the experience of listening to Tempting Boundaries the most enjoyable?

Which character – as performed by Gregory Salinas – was your favorite?

When Miranda had to tell family about being beaten up

I feel he read the book like he was acting out each part. I love when you are being read to but it's more like you are watching television and you can hear the difference characters and a voice reading at the same monotone